Sweet and squidgy white chocolate banana blondies with crunchy caramelised brazil nuts for contrasting texture and flavour. When you’ve got overripe bananas and need something sweet, just whip yourself up a batch. They don’t take long. 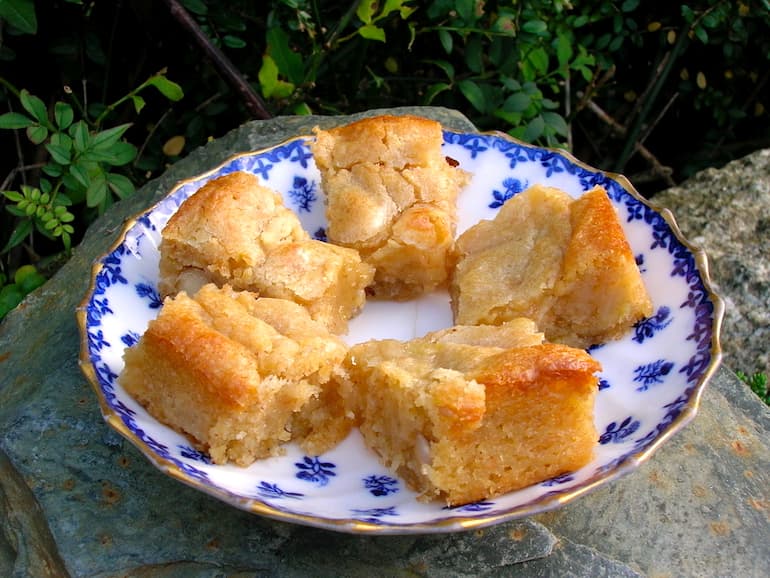 When it comes to bananas, CT and I are not fans. Strange, therefore, that I ended up buying a whole bunch of cheap bananas the other day. My eye for a bargain has let me down on numerous occasions, as a box full of ready made pasta sauces languishing at the back of a cupboard will testify.

I worked my way through a load of apples and then pumpkins and now it looks as though it’s the turn of bananas. This may be the first of many posts on the subject!

If I’m going to eat bananas, baked in cakes is one of the best ways, so I dutifully leafed through my baking books. Being in the mood for something sweet and comforting, Dan’s Lepard’s banana blondies in his brilliant book Short & Sweet sounded just the ticket with lots of sugar, white chocolate and caramel. You couldn’t get much sweeter than that.

p.s Turns out this recipe for banana blondies was a turning point for me. I now really like baking with bananas and you’ll find many banana recipes here on Tin and Thyme to prove it.

Dan Lepard is the king of baking. But despite that, I tinkered with his recipe. I just can’t help myself. Even though these banana blondies aren’t meant to be in any way healthy, I do like to get a bit of roughage in when I can. Thus wholemeal flour found its way into the mix rather than plain. To mitigate against the slightly heavier flour, I upped the quantity of baking powder too. And I reduced the sugar a little, though you’ll find there’s still plenty in there.

As I found out when I cut this first batch of banana blondies, they weren’t really quite cooked enough. I reckon another three minutes would have been a good idea. The ones around the edge were just about perfect, but the middle was decidedly on the squidgy side.

However,  as I infinitely prefer under cooked to overcooked brownies, I wasn’t going to complain. Oh no, indeed not, these were just the scrumptiously sweet little bites of delight I was hoping for – even with the banana. The crunch of caramelised nuts is excellent for both contrasting texture and flavour and they’re really delicious in their own right.

You don’t have to use brazil nuts of course, you can include whatever ones you fancy or have to hand. I really like them though and they seem to work particularly well with bananas.

Thanks for visiting Tin and Thyme. If you make these banana blondies, I’d love to hear about it in the comments below. And do please rate the recipe. Have you any top tips? Do share photos on social media too and use the hashtag #tinandthyme, so I can spot them.

If you’d like more banana recipes, follow the link and you’ll find I have quite a lot of them. All delicious, of course.