I have a new piece of Froothie equipment to play with. It’s an Optimum HealthyFry – a rapid air fryer that can bake cakes too. Who’d have thought it? I have used it for frying of course, but I couldn’t wait to try baking a cake in it.

With my promise to bring you all things vegan this month of Veganuary, I have created this rich and fudgy chocolate banana cashew cake. Ladies and Gentleman, forget the banoffee, I give you banashew.

I knew the cake had to be a chocolate cake for We Should Cocoa, but what sort of chocolate cake? For some reason I’d nut butter on my mind. I suddenly remembered the banana chocolate peanut butter cake I once made and what a good combination those three ingredients were. Then I thought of the cashew brownies that won a place in the Cranks recipe book and suddenly my vegan chocolate banana cashew cake was born. CT, being CT, promptly named it Banashew Cake.

Like most of my cakes, this chocolate banana cashew cake is made with nutrient rich whole foods. This one is even more nutritious than normal, even though it’s iced. It contains healthy fats, wholemeal spelt and cashew nut butter. I’ve used rapadura as the sweetener. This is an unrefined form of sugar that retains many of the cane sugar’s nutrients. It’s particularly high in iron, which as a vegetarian, I’m always slightly concerned about.

But don’t worry if you can’t source rapadura, you can use coconut sugar or muscovado instead.

I’ve used my usual wholemeal spelt flour in this recipe, because it really is the baker’s best friend.

The cake is super easy to make. This is mostly because there’s no creaming required and everything can be added to the pan in which you melt the coconut oil. The icing is made in a similar way, by melting. If you’ve scraped the original pan out well with a spatula, you don’t even need to wash it before using it for the icing. I do so hate washing up.

If you don’t have an air-fryer, you can bake this chocolate banana cashew cake in a conventional oven. You just need to up the temperature to 180℃ (350℉, Gas 4). For a larger cake, just double the quantities. This will make a 20cm (8″) round cake. But you will need to bake it for an additional 10 to 15 minutes.

Vegan chocolate isn’t the easiest to find. Most dark chocolate is made in the same factories as milk chocolate and can be contaminated by dairy. Seed and Bean not only guarantee their dark chocolate to be vegan, but it’s organic as well. Vivani and Pacari are not so easy to get hold of, but they are also vegan and organic.

The cake is a fairly modest one as the tin size that comes with the Optimum HealthyFry* is only 15cm / 6″ in diameter, but the quantities can easily be doubled for a more standard size. It’s quite a rich cake, so although it’s extremely delicious, a little goes a long way.

I have used the Optimum HealthyFry for purposes other than cake – honest! I’ll be writing a review and bringing you more recipes over the next month or so as part of #Jumpstart17. As a Froothie Ambassador, I can offer Tin and Thyme readers free P&P on any Froothie appliance* – add 2483 free ambassador delivery to the comment box when ordering to get free postage and packing. Delivery will be credited back onto your card. The Optimum HealthyFryer is currently on offer at £149.

Thanks for visiting Tin and Thyme. If you make this chocolate banana cashew cake, I’d love to hear about it in the comments below or via social media. Do share a photo on social media too and use the hashtag #tinandthyme, so I can spot it. 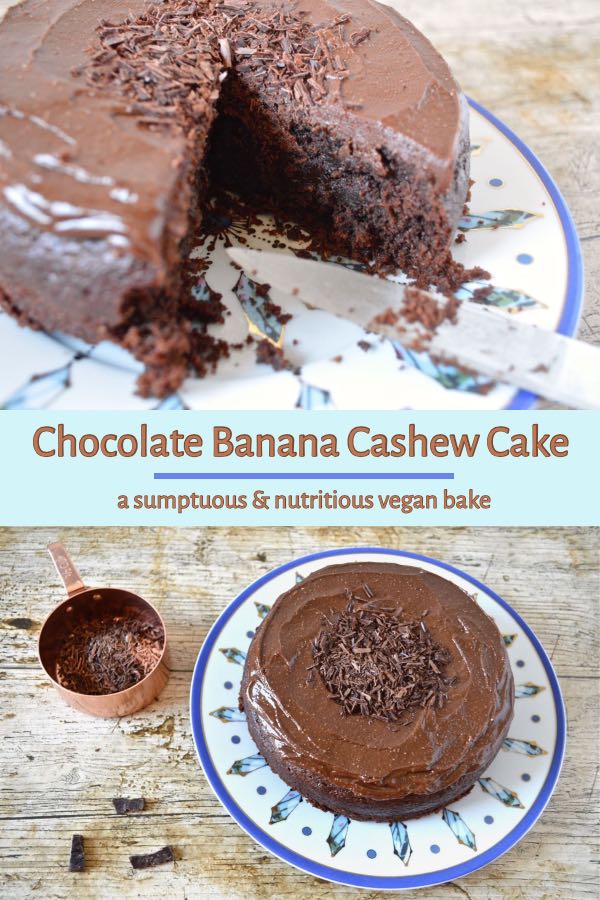 The cake is quite rich, so a little goes a long way. Double the quantities for a 20cm / 8" cake tin and bake for an additional 10 to 15 minutes. Can be baked in a conventional oven at 180℃ (350℉, Gas 4). Please note: calories and other nutritional information are per serving. They're approximate and will depend on exact ingredients used.

This vegan chocolate banana cashew cake, aka banashew, is my entry to this month’s #WeShouldCocoa. If you’ve made anything with chocolate this month, do join in. You have until 28th January.