Rich and chocolatey with spicy notes in the biscuit and herby notes in the ganache. These chocolate macaroons are crunchy on the outside and chewy in the middle. Indeed, they’re totally scrumptious with their contrasting textures and flavours. Well worth making for a special occasion. 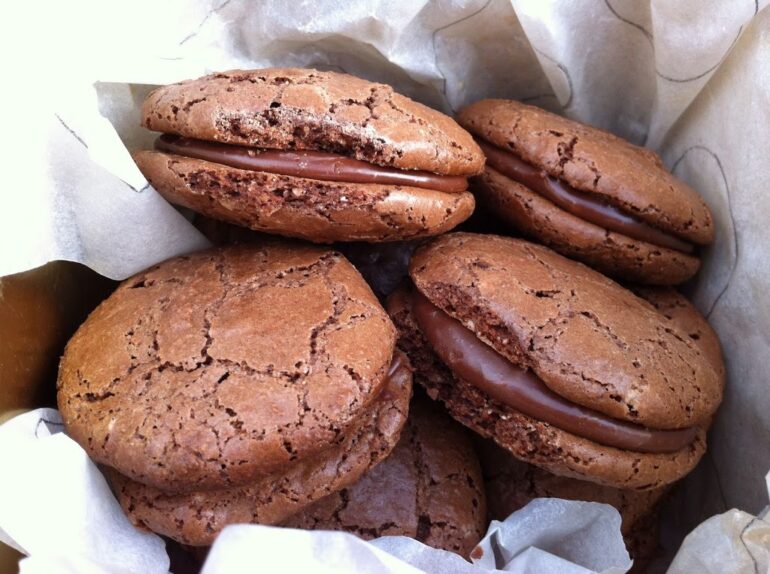 With two left over egg whites from making ice-cream and a Forever Nigella entry to submit over at Maison Cupcake, chocolate macaroons were my indulgence of choice. Sarah of Maison Cupcake has changed the rules, maybe as a new year’s treat and we can now make whatever Nigella recipe we like – hoorah!

Inspired by the herb flavourings for truffles in my newest book Crazy Water Pickled Lemons, I added a couple of things that were not mentioned in the Nigella recipe, namely star anise and rosemary. And very nice additions they proved to be. If, however, you don’t like the idea, just leave them out.

I also changed the method quite considerably and halved the recipe. Normally I prefer dark chocolate to make ganache and that’s certainly what Nigella suggests. But for some reason I prefer milk chocolate in these macaroons, so that’s what I use.

The hardest part of this recipe is whisking the egg whites. You can do this by hand, but as someone who’s done this on one too many occasions, I’d advise electric beaters or a stand mixer.

You need to leave the macaroons to sit for twenty minutes before placing them in the oven. This is apparently meant to eradicate cracking, but it’s never done it for me. That’s OK, I like the cracked homemade look. Hopefully you do to.

These chocolate macaroons may not look as elegant as the French macarons, but they’re incredibly delicious. I don’t know anyone who hasn’t thought so and quite a few have tried them. They’re crunchy on the outside and chewy in the middle. The presence of the star anise in the macaroons and rosemary in the ganache are subtle, but noticeable. They add a certain hint of sophistication and exoticism to the proceedings.

The first time I made them, CT went off on one of his streams of consciousness. Luxurious, decadent, rich and unctuous were some of the words I heard. He identified the taste of China and correctly described the taste as being like China meets the Med. It’s a marvel, he said, what you can do with an egg. At least that’s what I think he said, his mouth was full at the time.

Pack into an air tight tin and they should last for three to four days without going soggy.

To Pipe or Not To Pipe

The first time I made macaroons, I was really pleased with the end result. They were totally scrumptious, but they were exceedingly faffy to make. In fact, it was a random recipe challenge and when I found out CT had picked macaroons, this was my comment: “Argh, macaroons!” Fiddly, faffy food is not my forte – although alliteration might be.

I deem macaroon recipes as fiddly because of the piping. I have now dispensed with this method and just spoon the mixture straight onto the baking trays. It gives a slightly less uniform result, but the difference is marginal and saves a whole heap of time and mess.

That first time was also my first attempt at using a piping bag that CT gave me for Christmas one year. Once I started, I knew there was a reason I’d been putting it off. Turned out I got more of the mixture over myself, the outside of the bag and the worktop than I did inside the actual bag. I found it fiddly, faffy and frustrating. AND I broke the bag.

If you’re competent with a piping bag, by all means pipe your macaroons. But unless you’re going for a chic French macaron look, there’s really no discernible difference in result.

Chocolate ganache can be a tricky filling to make. Going back to my first attempt at chocolate macaroons, you can see I made a bit of a hash of that too. I managed to split the ganache split, grrrr! Then spent an inordinate amount of time wondering why I didn’t follow Marc Demarquette’s tips which worked so well in this lemon balm ganache.

Handle your ganache carefully and don’t mix it too vigorously. It’s best to leave everything to melt without stirring. Take off the heat, then stir gently from the inside out until everything is emulsified. Then leave well alone.

If your ganache does split, try adding a little warm water or hot milk. Even hot cream usually works for me.

One of the really nice things about ganache, is that it’s easy to infuse it with herbs. All you need to do is heat the cream with your chosen herb an hour or so before you need it. Then strain the cream and discard the herbs. Failing that, just add the herbs to the ganache as you’re making it and fish them out before it sets.

What To Make With Leftover Egg Yolks

This recipe leaves two leftover egg yolks. However, I always see this as a good opportunity to make something else. That something else is usually some sort of custard. But there are other delicious options.

Here are all the recipes on Tin and Thyme that use only egg yolks.

Thanks for visiting Tin and Thyme. If you make these chocolate macaroons, I’d love to hear about it in the comments below. And do please rate the recipe. Have you any top tips? Do share photos on social media too and use the hashtag #tinandthyme, so I can spot them.

If you’d like more ganache recipes, follow the link and you’ll find I have quite a lot of them. All delicious, of course.

For extra notes of rosemary, warm the cream and rosemary in a pan and leave to infuse. Strain the cream before using as per the recipe.Please note: calories are per serving. They’re approximate and will depend on exact ingredients used.