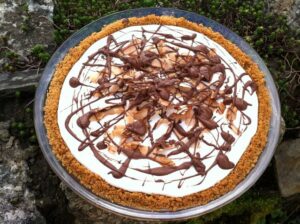 Of all the food blogging challenges out there, Random Recipes from the delightful Dom of Belleau Kitchen is my absolute favourite – excluding We Should Cocoa, of course. I love the way it makes me discover new recipes or cook something I might never normally get around to or even think I want to make. I’ve been unable to participate in the last two challenges and this has left me feeling somewhat bereft. However, it’s a new year and I am determined to apply myself more effectively. This month, it’s a new year, a new book, in other words we’re to pick a random recipe from our newest book or in my case books.

I had two food books given to me for Christmas this year: Tea with Bea and Cooking with Chocolate. I was very happy to have either of these picked. CT did the honours and it turned out to be Tea with Bea. Page 63, CT announced when I asked him to pick a number. At this point, my heart sank a little, page 63 was the chapter heading for tarts, but pastry really isn’t my forte. Well, I mused, I can’t very well make a chapter heading, I’ll get CT to pick another number. Feeling my resolve weakening, I gave myself a stern talking to and went for the first tart that involved chocolate. This was the ultimate coconut cream pie and not only did it sound superb, but it didn’t involve pastry – yeah!

The instructions for the coconut pastry cream were overly complicated, so I ignored them and used a standard custard method instead.

Looking nothing like the elegant creation depicted in the book, this was nonetheless delicious, or as CT said, ambrosial. It was all about the cream and coconut, the sweetest thing being the chocolate. It had a great mix of textures with the chewiness of flaked coconut, the crunchy biscuit base and the smooth cream. The overall effect was of a very light dessert, but very moreish. Even without the coconut extract and malibu, it tasted very coconutty.

Unfortunately, it was as I feared and the base was way too crumbly as it didn’t have enough butter to hold the mixture together. This combined with the soft custard & cream meant I had to spoon the mixture into bowls rather than cut a slice and serve on a plate.

All in all, I wasn’t very impressed with Bea’s recipe writing skills, but I was impressed with her concept and ultimately taste will always win out over presentation with me.

Nice antidote to all that We Should Cocoa healthiness! Thank you Dom.

Recipes To Use Up Egg Whites

This recipe does leave rather a lot of leftover egg white. However, I always see this as a good opportunity to make something else. That something else is usually friands as they’re quick to make and delicious to boot. But there are other options.

Here are all the recipes on Tin and Thyme that use only egg whites.