A review of the cookbook Crazy Water Pickled Lemons by Diana Henry. Well I say cookbook, but it’s so much more than that. It’s a Mediterranean adventure full of nostalgia and dreamtime that will have you desperate to not only try some of the recipes but to get on the next boat heading south. 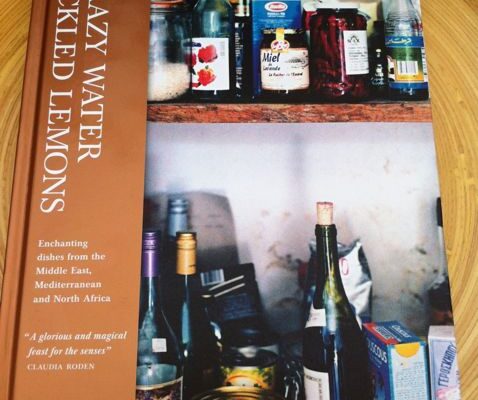 I was absolutely delighted to receive a review copy of Crazy Water Pickled Lemons by Diana Henry from Octopus Publishing. My Levantine genes will out, so it’s no surprise that Mediterranean cuisine is a favourite of mine. Much as I love Middle Eastern food, however, this book has a wider reach than a classic Claudia Roden for example. Subtitled enchanting dishes from the Middle East, Mediterranean and North Africa, it’s a gentle blend of cuisines, flavours and techniques. Adapted by Diana to form her own take on this culinary heartland.

Before receiving this book, I’d never heard of Diana Henry – shame on me! Now an award winning food writer for the Sunday Telegraph, Diana didn’t come to food writing until relatively late in life. She has, however, always been an avid cook and food adventurer. Her enthusiasm shines through the book and leaps out at surprising moments. First published in 2002, Crazy Water Pickled Lemons was the first of six books that Diana has written (so far). This is a revised edition published this year.

For me this book is evocative of the Arabian Nights, avidly read as a child. Later as a teenager, I was somewhat bemused by the unexpurgated version I’d got hold of. Anyway, the book itself is hypnotic in its sensual, magical, exotic and haunting qualities. The very chapter headings are compelling in their otherworldliness. Take for example, Fruits of Longing which highlights figs, quinces, pomegranates and dates. Then there’s Plundering the Stores where almonds, hazelnuts, pine nuts and dried fruits come to the fore. The Spice Trail has a mouthwatering selection of recipes which use cardamom, chilli, cinnamon, cumin, ginger, coriander, pimenton and saffron. And then there’s Heaven Scent with recipes using flowers and flower waters.

And the drowsy photography fits right along, with half glimpses of foods remembered from some nostalgic dream-time. This is not usually my favourite form of food photography. I like to see the finished article in all its clarity which gives me an idea of what I am aiming for or aspiring to. But in Crazy Water Pickled Lemons, this form of photography fits well. Yet, despite this whimsy, the content is very much grounded in reality. This is a book of recipes that would be familiar to thousands of home cooks around the Mediterranean.

As a vegetarian, I was slightly disappointed to see so many meat and fish dishes. But I did manage to pull some nuggets from the predominantly carnivorous pages. Kushary was one I was particularly excited by. A meal of rice, lentils and macaroni, this is one of Egypt’s national dishes and is particularly prevalent in Cairo. Despite having eaten it a number of times whilst living there, I have never yet made it.

There are also plenty of ideas for mezze including flatbreads and pickles. And of course, with the Med’s notoriously sweet tooth, there are a number of treats to keep the sugar lovers amongst us satisfied. Diana’s writing more than makes up for any lack of flesh free dishes. Indeed this book is a joy to read. Each chapter begins with a three page contextual narrative which tantalises in such a way that you can hardly wait to plunge into the recipes that proceed it.

No review is complete without at least one recipe being tested. I don’t really associate the Med with chocolate, so I was somewhat anxious that I wouldn’t have any chocolate recipes to try. But I needn’t have worried. There are four to choose from and all of them sound enticing and exotic: chocolate and rosemary sorbet, herb-scented truffles and stuffed figs dipped in chocolate. The one I chose to try first was a chocolate, hazelnut and sherry cake with sherry-raisin cream. This now features on my blog, but I can report here that the recipe was surprisingly simple, easy to follow and every bit as good as Diana promised.

Pickled lemons I’m assuming all are familar with, but what is this crazy water referred to in the title? Fellow vegetarians, read no further, it’s all about sea bass. In Diana’s own words “Ah, the title dish. And I must say I initially fell in love with it for its name. It’s from the Amalfi coast and nobody really knows why the dish is called “Crazy Water”. Some have suggested it alluded to the sea-water used by fisherman to cook their catch at sea, others that the “crazy” refers to the heat imparted by the chilli“.

Thanks for visiting Tin and Thyme. If you get hold of Crazy Water Pickled Lemons or try this recipe for chocolate, hazelnut and sherry cake, I’d love to hear about it in the comments below. Do share photos on your preferred social media site and use the hashtag #tinandthyme, so I can spot them.