Recipe for classic fig rolls (aka fig newtons), but made with wholemeal spelt flour. The fig paste is lightly spiced and gently sweetened and the pastry casing is delicious in its own right with subtle notes of lemon. These biscuits are easier to make than you might think. 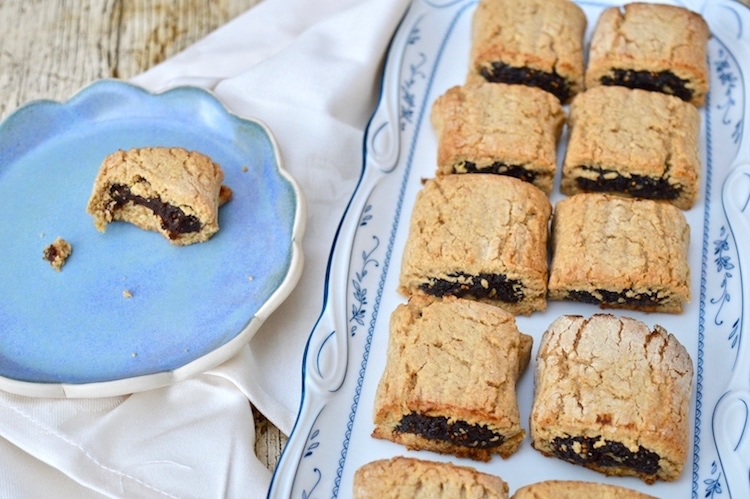 Fig rolls are one of those biscuits that divide opinion. They have a Marmite, love them or hate them quality. Needless to say I’m in the appreciative camp. So, I was delighted that Paul Hollywood chose these childhood treats for the technical challenge on Great British Bake Off last week.

To be honest, I was surprised he chose such an easy challenge, but I’m not complaining. Finally, it gave me the oomph required to bake these delicious cookies. They have been on my must try list for years.

For a similar, but more refined Middle Eastern version take a look at my Maamoul recipe.

Every year I try and make something from the current series of the Great British Bake Off. Last year I made a spinach and lemon cake for #CakeWeek. It was my super simple version of Le Gâteau Vert and most delicious it was too. Amongst other recipes, I’ve also made chocolate Viennese whirls, triple chocolate bread and Black Forest gâteau. This year it was the fig rolls in #BiscuitWeek that grabbed my attention.

But it’s #BreadWeek tonight, so who knows, I might be inspired all over again.

Fig rolls are a classic British biscuit. Or so I thought. Turns out, they originated in ancient Egypt. The commercial variety that we know and sometimes love were first produced in 1891 by Charles Roser from Philadelphia in the United States. He patented the automated process which was almost immediately bought by the Kennedy Biscuit Company.

Fig rolls are known as fig newtons in the States, so called as the factory that made them was in Newton, Massachusetts. I can’t find out when the fig roll came to the UK, but suffice to say, it’s been around for quite a long time.

There is some dispute as to whether fig rolls are a cake or a biscuit. I think this might be because fig newton casings are softer and more cake like, whilst ours are crumbly and more biscuit like. But in the UK, fig paste is encased in an enriched sweet pastry and chopped into small flattened rectangles. This makes it a biscuit in my book. Plus you’ll find them in the biscuit aisle in shops and supermarkets not the cake aisle.

I’ve made a figgy bread roll in the past, but had completely forgotten about it until I started writing this post. The filling for that is a bit more elaborate than for these fig rolls, but it’s another fun bake to make.

My mother was quite strict when it came to sweet treats. Well, apart from her famous puddings. She certainly didn’t believe in buying biscuits anyway. My introduction to fig rolls came when I first went to stay with a friend of my mother’s at the age of seven.

She lived on a remote Cornish smallholding which you could only reach by tractor or by walking a mile down a steep and sometimes treacherous path. She didn’t have a tractor, so walking it was.

The house had no electricity and in those early days, no running water either. I used to love staying there, it always felt like a real adventure. Down to the well to collect water and to bed by candlelight. Anyway, once a week, a grocery van used to stop at the top of the aforementioned path just so she could catch up on supplies. And one of those supplies was always a packet of fig rolls.

Many’s the time we made that journey across the river and up the track. We had to cross an old rickety wooden bridge and I always wondered if I’d make it safely across before it collapsed into the turgid water below. But it was always worth it. Those fig rolls were such a treat.

I found lots of recipes for fig rolls, both online and in some of my baking books. But in the end I based mine on the Paul Hollywood recipe that the bakers used on #GBBO. His was simpler than most, used less sugar and seemed more like the “real” thing.

Obviously I changed it somewhat. I added a few extra spices, changed the method to make it easier and used wholemeal spelt flour for my pastry casing. Oh, and I swapped Paul’s vanilla for lemon zest in the biscuit dough.

The fig filling is really easy to make. It’s just a question of bunging all of the ingredients into a pan, then simmering them and blitzing. It’s best to do this bit first so the fig paste can cool and firm up whilst you’re getting on with making the pastry.

I didn’t have any stem ginger, so I used some crystallised ginger as I always have a jar of that to hand. Although I adore cinnamon, I thought the quantity Paul used might overpower the other flavours, so I used less of this and added a pinch of ground cloves and a grating of nutmeg instead.

Although the dough casing is more like pastry than a snappy biscuit, it’s made using the creaming method rather than the rubbing in one. It’s very straightforward. I just use a bowl and wooden spoon for this, but you can use a handheld or stand mixer if you prefer.

When it came to rolling the pastry out, I found I made a larger rectangle than the one Paul stipulated in his recipe. Perhaps this is why I made sixteen fig rolls rather than only twelve. In order to make a neat (ish) rectangle I cut ragged bits off the edges and pressed them into the sides which weren’t quite wide enough. The dough is quite malleable, so this wasn’t difficult. I wasn’t going to waste any of it, that’s for sure.

This was the bit, I felt, where it could all go hideously wrong. But it didn’t. It was all a lot easier than I was expecting. The wholemeal spelt pastry cracks quite easily, so don’t expect your fig rolls to look perfectly smooth. Mine certainly weren’t. But then I like a homemade look.

I baked mine for fifteen minutes as I wanted to ensure the biscuit dough was properly cooked. Plus I wanted them to look properly golden. But if you prefer a paler fig roll, try baking for twelve minutes instead.

Once baked, the fig rolls just need to cool, then you can eat them straight away or store in a tin until needed. They’ll last a few days, but the pastry gets steadily softer as the days go on. Having said that, this batch lasted five days and the biscuit dough held together just fine.

I took one in to work with my packed lunch on day two and another on day four. They’re quite substantial, so I reckoned one was enough. As for the rest, CT and I polished the lot off at home.

I doubt Paul would have been impressed by the unevenness of my bakes, but I was delighted with the result. They tasted much as I remember them and CT thought so too. Only better, because they were homemade, healthier and bigger.

Thanks for visiting Tin and Thyme. If you make these wholemeal spelt fig rolls, I’d love to hear about it in the comments below. And do please rate the recipe. Have you any top tips? Do share photos on social media too and use the hashtag #tinandthyme, so I can spot them.

If you’d like even more biscuit recipes, follow the link and you’ll find I have an awful lot of them. All delicious, of course.

Can keep for up to a week in a sealed container, though the pastry will soften.Please note: calories and other nutritional information are per serving. They’re approximate and will depend on serving size and exact ingredients used.

I’m sharing my wholemeal spelt fig rolls with Jo’s Kitchen Larder and Apply to Face Blog for #BakingCrumbs. I’m also sending them to #CookBlogShare, which is hosted this week by Everyday Healthy Recipes.

Previous Post: « What is Spelt Flour and How to Use It
Next Post: Tomato Galette with Homemade Basil Pesto »