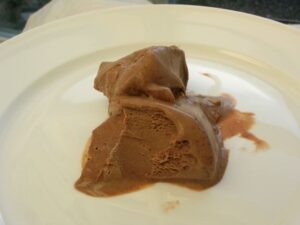 This post starts with a sincere apology to Ben Vear, the author of Make your own organic ice-cream. Ben sent me his book to review in December! My excuse? Well I made some very delicious ice-cream following Ben’s instructions, but partly because I’m ill equipped for ice-cream making and don’t have a scoop and partly because of light issues, the photographs I took look more like something a dog served up on the pavement! The one you see is the best of the bunch.

However, I am biting the bullet now as this excellent book deserves a mention and although it might not look up to much, the ice-cream I made from it was delicious.

Ben Vear of Winstones Cotswold Ice Cream is a firm believer in good quality food. He is particularly passionate about sourcing local and organic ingredients wherever possible which is reflected in the full title of his book make your own organic ice cream using home-grown and local produce. This alone made the book immediately appealing to me.

Ben starts by telling a story which captured me straight away. It tells of his grandfather starting his own ice-cream business in 1925 and how that has morphed into the successful family business that Ben works in today. Finding his grandfather’s old ice-cream recipes in a long forgotten safe at the bottom of the garden, was particularly fun. He goes on to give a brief history of ice-cream and then a little bit about the science behind it.

Starting with the basics of what equipment is needed (you don’t actually need anything special, although there are a few things that help), Ben goes on to explain how to make a good basic custard. The rest of the book then had me desperately wanting to up my ice-cream intake immediately. All of the basic flavours you’d expect are covered, but there are also chapters on spring & summer flavours, autumn flavours and winter flavours that include far more unusual ingredients. Most intriguingly for me, savoury ice-cream is also covered: Jerusalem artichoke & nutmeg ice cream anyone or perhaps you’d prefer wasabi? There are also chapters on sorbet, semifreddo, toppings and smoothies. Apart from the savoury ones, some of the recipes that had me whimpering with desire were: Green Tea Ice-cream, Crab Apple & Elderflower Ice-cream, Eton Mess Ice-cream, White Chocolate & Truffle Ice-cream and Damson & Sloe Vodka Sorbet. The instructions are clear and easy to follow. As you’d expect, the book is well illustrated with lush pictures of ice-cream throughout.

Much as I love ice cream, I hardly ever make it. Not having an ice-cream maker, I find it a bit fiddly and it usually ends up with ice crystals which makes for an unpleasant gritty texture and a big disappointment. However, this book inspired me to have another go. I’d recently seen chocolate chilli ice cream over at Farmersgirl Kitchen and with some miracle chillies harvested in January, (ripened outside down at the field in winter??????) I knew exactly which one I wanted to start with. I followed Ben’s recipe for chocolate ice-cream, but added my own chilli twist.

It was with some trepidation that I tried the ice-cream. Would it work, or would the texture be horribly icy?  It was in fact perfect: beautifully smooth and creamy and it tasted wonderful too. It was of course very chocolatey and had an interesting burst of heat that went brilliantly well with its chilly nature. Thank you Ben, I’ll be using this book again. And again.
Previous Post: « Cinnamon Choc Chip Friands
Next Post: White Chocolate Scones: Two Ways »