Rosemary Chips – Air Fried, Crisp on the Outside, Fluffy in the Middle 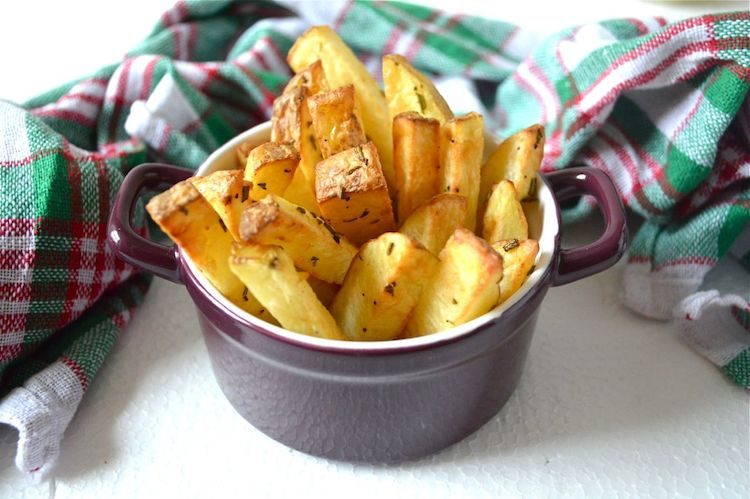 We tend to eat chips as an occasional treat from our local chippie. I’m not sure I’ve ever eaten them three times in one week before. But when you can air fry them with just a teaspoon or two of oil and they turn out to be as delicious as these rosemary chips, they are very hard to resist.

END_OF_DOCUMENT_TOKEN_TO_BE_REPLACED

Recipe for a warming, nourishing and colourful lentil, carrot and roasted tomato soup,  flavoured with herbs and spices. It takes a while to cook, but this allows the flavours to develop and become even more delicious.

END_OF_DOCUMENT_TOKEN_TO_BE_REPLACED

Smooth and soft caramel with the flavours of sweet tart passionfruit and a hint of rosemary enrobed in a rich crisp chocolate casing. The flavours and textures meld perfectly in these passionfruit caramel chocolates. There’s even a video from a master chocolatier to show you exactly how to make them.

END_OF_DOCUMENT_TOKEN_TO_BE_REPLACED

When Dom announced that this month’s Random Recipes was to choose something from a book gifted at Christmas last year, I thought oh good. I was thrilled to have received Tea with Bea as a present last year and really haven’t used it much. Now was my chance, I thought. But something was drifting around in the back of my mind, trying to get break through to the surface. With a feeling of doom, the thought finally emerged: I received two books for Christmas last year. The second was the highly regarded Cooking with Chocolate by Frederic Bau from the Ecole du Grand Chocolat Valrhona – eek! Don’t get me wrong, this is a fantastic book and I love poring through its pages whilst having fantasies about reproducing the high art of patisserie found therein. But these are, I should stress, fantasies, not actuality. I mean to say, me? Actually make something from it?

I used a random generator hoping against hope that Tea with Bea would be chosen; after all I did have a 50% chance. But, it was not to be. With heavy heart, I used the random generator once again. Page 378 gave me a concoction so complicated I nearly fainted on the spot. A cake made up of seven, yes seven different recipes: chocolate sponge, ginduja pastry, gold-dusted chocolate shards, chocolate custard, cocoa syrup, chocolate mousse and a chocolate glaze. I could see Christmas would have to be cancelled as I locked myself in the kitchen for the next few days. No, sorry Dom. For the first time in all these months of entering Random Recipes I was going to cheat. I had a tentative look at the recipe on the previous page and then looked again. Yippee, Golden Palets (or truffles to you and me). I was wanting to make chocolates for Christmas and to enter Vanessa’s virtual Lets Make Christmas chocolate event having sadly missed the real live one at the Rococo Chocolate Factory in London, so these would be perfect. Even the thought of tempering chocolate and the three stars donating hardest level recipe, did not put me off. These seemed to be simplicity itself in comparison to the da Vinci Code of cakes.

On 12/12/12 it was my Great Uncle’s 100th birthday. There is a big family get together up in Kent this weekend to celebrate this momentous and unusual event. I wanted to make a particularly good job of these chocolates as some of them are destined for the birthday boy. No pressure then.

Inevitably, I changed the recipe, but like to think I stayed true to the spirit of the golden palets. I flavoured the ganache with rosemary rather than vanilla and upped some of the quantities as I wanted to make a goodly number.

This is how I made rosemary chocolate truffles: 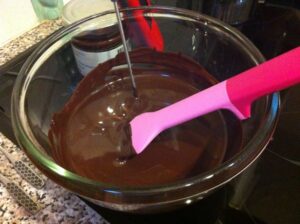 My tempering didn’t give my the glossy chocolate I was hoping for, but I wasn’t really surprised. Apart from anything else, my kitchen was colder than the fridge, which doesn’t make for happy chocolate. However, after the three hours it took me to temper the chocolate and dip everything, I was determined to be pleased with the results. They certainly tasted fantastic, with the flavour of rosemary coming through nicely, but not too strongly. The texture was beautifully smooth and with a bit of dressing up, they looked fine.

Dom may have a lot to answer for, but Random Recipes spurred me into action and produced a huge number of chocolate gift boxes, so I will forgive him 😉

I was so sorry to have missed the fabulous Lets Make Christmas gift swap with Vanessa Kimbell and Chantel Coady, but am delighted to be able to submit this post to the virtual version and thus play some part in the great chocolate event of the year. Incidentally Vanessa is very excitingly now running a cookery school in Northampton called Juniper & Rose.

With the rosemary playing such an important part in these chocolates, I am also submitting this to Karen’s Herbs on Saturday. 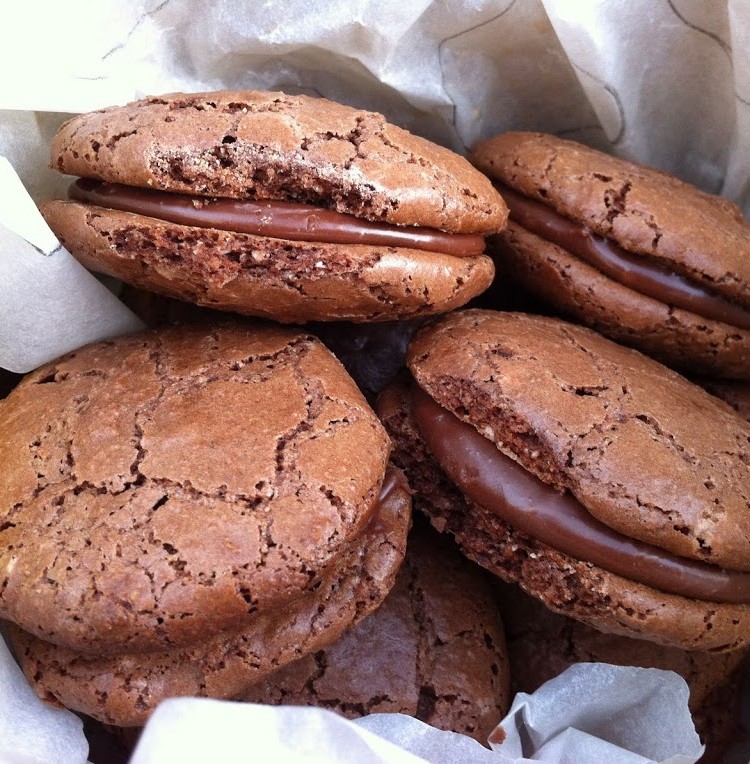 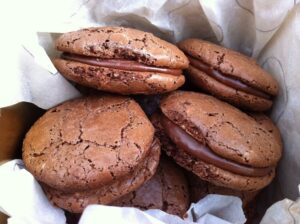 With two left over egg whites from making ice-cream and a Forever Nigella entry to submit over at Maison Cupcake, chocolate macaroons were my indulgence of choice. Sarah of Maison Cupcake has changed the rules, maybe as a new year’s treat and we can now make whatever Nigella recipe we like – hooray! After my last attempt at macaroons, which were delicious but exceedingly faffy, I thought I wouldn’t bother with the piping fiasco this time and just spoon the mixture straight onto the baking trays. Admittedly my first attempt gave a slightly more uniform result, but the difference was marginal and saved me a whole heap of time and mess. Inspired by the herb flavourings for truffles in my newest book Crazy Water Pickled Lemons, I added a couple of things that were not mentioned in the Nigella recipe, namely star anise and rosemary. 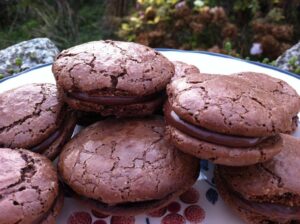 Leaving the macaroons out to form a skin didn’t work, just like the last time. My macaroons came out exceedingly cracked. That’s OK, I like the cracked homemade look. However, they were just as delicious as I remember them. Crunchy on the outside and chewy in the middle. The presence of the star anise and rosemary were subtle, but noticeable and added a certain hint of sophistication and exoticism to the proceedings.

CT went off on one of his streams of consciousness and identified the taste of China and correctly described the taste as being like China meets the Med. It’s a marvel, he said with what you can do with an egg – the perfect food. At least that’s what I think he said – his mouth was full at the time.

Next time I make macaroons, I will stick to the spoon method as it is infinitely preferable to messing around with a piping bag and for incompetents like me, there is no discernible difference in result.