Homemade classic British bourbon biscuits, but with a wee dram of whisky added for a touch of sophistication & added depth of flavour. Perfect snack or party fare. 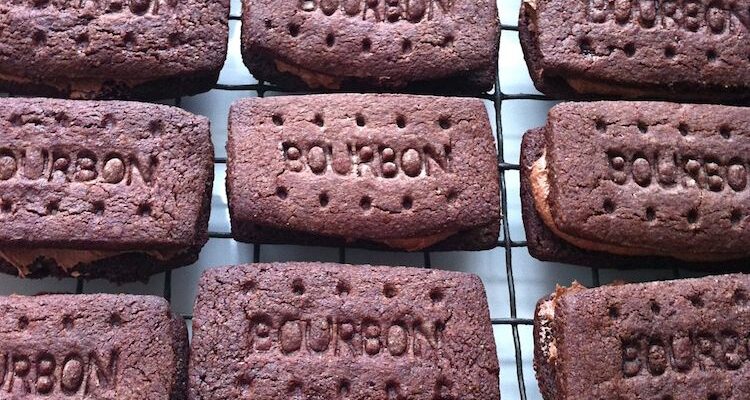 Back in August last year I posted a review of some classic British biscuit cutters and promised you the recipe for the bourbon biscuits I made using them. Well never let it be said that I don’t fulfil my promises – if somewhat dreckly. If you don’t know what dreckly means, you clearly haven’t been to Cornwall. They may be a bit late, but here follows the afore mentioned recipe.

Bourbons are one of my favourite shop bought biscuits, they are chocolate flavoured, have a filling, are cheap and definitely tasty. They’ve also been around since 1910 and although my mother never bought them when I was young, I used to snaffle the odd one here and there when visiting friends and family; I thought them the hight of sophistication.

Of course, I don’t buy them very often now either, as I doubt there’s a single nutritious ingredient included. Introduced by Peak Frean over a century ago and for some reason named after the French royal house of Bourbon, they are the fifth most popular biscuit in the UK.

The biscuit recipe I adapted, is from one of my favourite books, Homemade Memories by Kate Doran, baking blogger at The Little Loaf. She deftly uses bourbon in the buttercream filling and calls them Real Bourbon Biscuits.

I didn’t have any bourbon, so I used a wee dram of whisky instead. I also used a drop in the actual biscuit dough. This gave the rich chocolatey bourbon biscuits an added depth of flavour that lifts them up a level, virtually eye-to-eye with Ben Nevis in fact.

Thanks for visiting Tin and Thyme. If you make these bourbon biscuits, I’d love to hear about it in the comments below. And do please rate the recipe. Have you any top tips? Do share photos on social media too and use the hashtag #tinandthyme, so I can spot them.

If you’d like even more biscuit recipes, follow the link and you’ll find I have quite a lot of them. All delicious, of course.

Adapted from Homemade Memories by Kate Doran.Please note: calories and other nutritional information are per serving. They’re approximate and will depend on serving size and exact ingredients used.

I’m sending these homemade bourbon biscuits off to Cakeyboi and The Baking Explorer for Treat Petite where the theme this month is favourite sweets, chocolates and biscuits.

They also go to Bake of the Week with Casa Costella and Maison Cupcake.