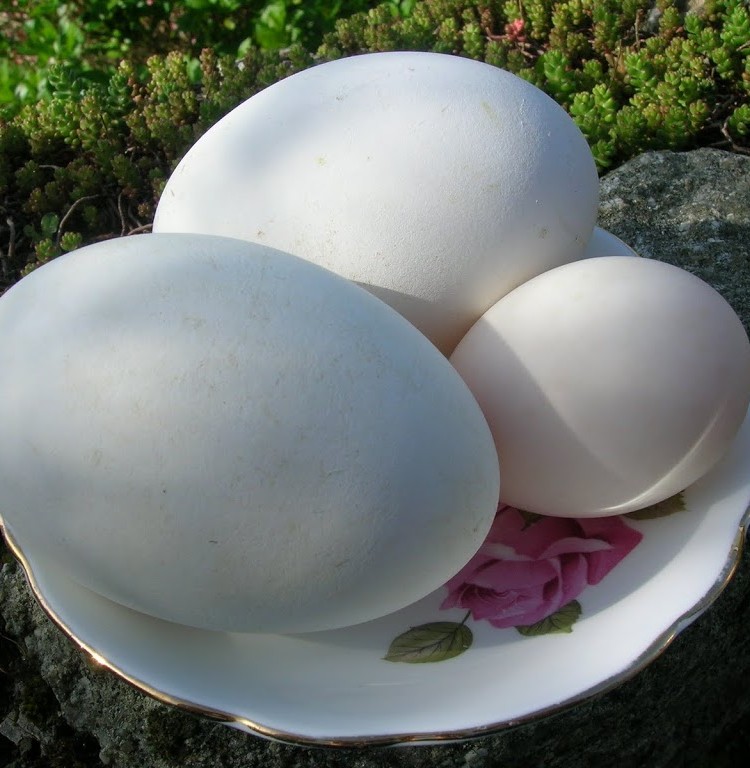 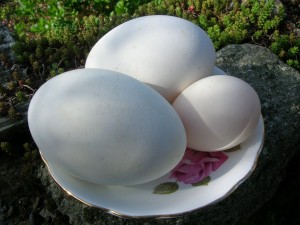 After writing my post on duck eggs nearly two years ago and seeing the picture of a goose egg there, I’ve been yearning to get my hands on one ever since. Goose eggs are meant to be even better than duck eggs for baking. Well, I couldn’t quite believe it when I went to get my duck eggs from our local weekly produce market the other week. Right next to the duck eggs was a basket of three goose eggs. I bought one immediately. I’d only been gone about a minute when I turned around and raced back again to buy the other two. Who knew how long it might be before I’d be able to get my hands on another one? I’d been told goose eggs make particularly good fried eggs and scrambled eggs. Well it seemed a shame to scramble my first ever eggs, so we had one each, fried for breakfast that Saturday. They were enormous (see above comparison with duck egg) and virtually covered the whole plate. They also kept us going down at the plot for a good many hours. 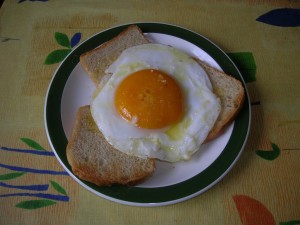 So what was I going to use my remaining egg for? I’d been wanting to make Willie’s famous cloud forest chocolate cake ever since I first saw it, but was waiting for the right occasion. Well really, what could be more special than baking with a goose egg? Willie’s Chocolate Factory Cookbook was thus unearthed and I proceeded to melt his Venezuelan Black 100% cocoa. As the egg, although large wasn’t quite worth 6 chicken eggs and as I only had 160g of the cocoa, I made a smaller cake than the stated one and had to estimate the quantities. This is what I did: 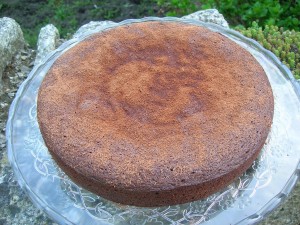 This had such a powerful chocolate smell whilst cooking, it made my stomach rumble even though I’d only just had lunch. Although the cake was meant to be iced, I thought it would be quite rich enough as it was – and it was! It was rich, dense, truffley and gorgeous. CT reckoned it was an adult only experience. The taste and aroma of chocolate was very strong. The texture was mousse like and more like a brownie than a cake. It wasn’t in the least bit sweet and had a robust underlying bitterness that was a bit like beer.