An indulgent but delicious cake featuring chocolate and cherries with a light chilli kick to it. Despite the cream filling and topping, this Black Forest gâteau is a light, flavoursome, not too sweet and delightfully squidgy bake. It makes an excellent dessert as well as a party showpiece. It has the added bonus of being gluten free. 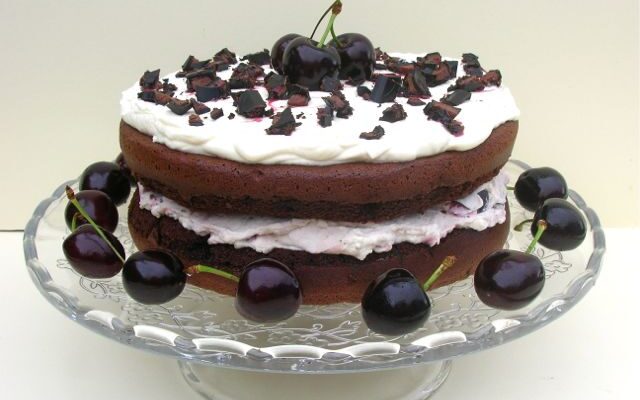 Why, I’m now wondering, have I never made Black Forest gâteau before? It’s a fabulous bake; not only is it very tasty but it’s also naturally gluten-free and relatively simple to make.

Chocolate and cherries are a bit of a classic. I’ve made a spectacular chocolate cherry trifle and a gorgeous chocolate swirled cherry clafoutis. But Black Forest gâteau had somehow passed me by.  It’s a cake I’ve been meaning to try for many years, but the 70’s image and the recollections of super sweet, artificial gâteaux from that era, meant it never quite made it to the top of my must-bake list. Until, that is, last week’s episode of the Great British Bake Off.

Pretty much everyone I know, including CT, was glued to the start of the new series. The showstopper round, which always completes the episode, happened to be re-inventing the classic 1970s Black Forest gateau. Well, that was the kick I needed, so I decided my version would bring a kick of its own.

What could bring it more up to date than a touch of chilli? Chocolate and chilli has been one of the most popular flavour combinations of the decade, so why not add cherries to the mix? Cherries, chocolate and chilli – a nice bit of alliteration, but how would they combine? As CT is fond of saying, there’s only one way to find out. I have some chilli vodka sitting in the cupboard awaiting such occasions as these and I also had a bar of sour cherry-chilli chocolate with 85% cocoa content. What could be more à la mode than that?

Using Eat Your Books to see what Black Forest gateau recipes I had in my cookbook collection, I found I had a surprising number. I also found that every single one of them was different. In the end, I based my sponge on a Delia Smith one from the 1970s. Not only did this have the appropriate retro vintage, but Delia described it as “squidgy”.

When talking about cake, squidgy gets me every time. It’s also gluten free and light on ingredients.The sponge contains only three: eggs, sugar and cocoa. I added a fourth. As for the filling and topping, I made it up. With English cherries still in season, I was not going to used tinned or jarred ones.

The result was an utter delight that made CTs day. The sponge was really light, which offset the cream nicely and as Delia had promised it was good and squidgy. There was just a soupçon of chilli coming through, both in the cake and cream, that built up to a pleasing and non-fiery warmth. And the cherries were both delicious and indulgent – just what you want from a cake.

If you’d like to see some more gluten-free recipes, I have quite a few of them.

Thanks for visiting Tin and Thyme. If you make this kick-back Black Forest gâteau, I’d love to hear about it in the comments below. And do please rate the recipe. Have you any top tips? Do share photos on social media too and use the hashtag #tinandthyme, so I can spot them.

If you’d like more layer cake recipes, follow the link and you’ll find I have quite a lot of them. All delicious and nutritious, of course.

An indulgent but delicious cake featuring chocolate and cherries with a light chilli kick to it. Despite the cream filling and topping, it is a light, flavoursome, not too sweet and delightfully squidgy bake. It makes an excellent dessert as well as a party showpiece. It has the added bonus of being gluten free.
Prep Time40 mins
Cook Time20 mins
Total Time1 hr
Course: Afternoon Tea, Dessert
Cuisine: British
Keyword: birthday cake, cherries, chocolate, gateau, gluten-free, vintage
Servings: 8 slices
Calories: 404kcal
Author: Choclette @ Tin and Thyme

With so many eggs in this cake, it has to join Dom over at Belleau Kitchen for Simply Eggcellent.

Lucy over at Baking Queen is hosting Bake of the Week on behalf of Helen, so this is winging its way in her direction too.