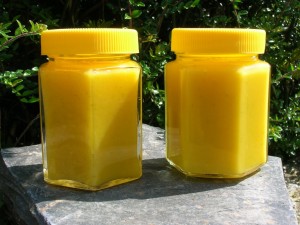 I know this isn’t strictly about chocolate. Actually this isn’t about chocolate at all, but it did come about because of our We Should Cocoa chocolate challenge and it will be featuring in a couple of chocolate recipes to come. The lime challenge gave me so many ideas and as ususal with these things, my list of recipes to make has grown even longer. Phil from As Strong As Soup made lime curd as part of his entry and Chele over at Chocolate Teapot has also recently made it. I so liked the idea of making lime curd that I was determined to do so and worry about what to do with it afterwards. In the end I adapted a recipe for Lime and Ginger Curd that I found in one of the books I’d borrowed from the library, Seasonal Preserves by Joanna Farrow.

The colour might lead one to think this was lemon curd rather than lime, but I was thrilled with the gorgeous yellow that I can only assume came from the duck eggs. As for the taste, it was as delicious as I’d hoped, smooth, rich, very limey with just a hint of ginger. I think I might just be making this again.
0
Shares
Share  on Facebook  Share  on Twitter
Tags: fruit curd, ginger, lime curd, limes