If you like flourless chocolate cakes, you’ll love this recipe. It’s based on Nigella’s chocolate pistachio cake and it replaces the usual ground almonds for ground pistachios. It has a delightful light and smooth mousse-like texture and is topped with a slightly fruity chocolate ganache. Serve it for a birthday or celebratory party or as an elegant dessert. It works well in either situation. 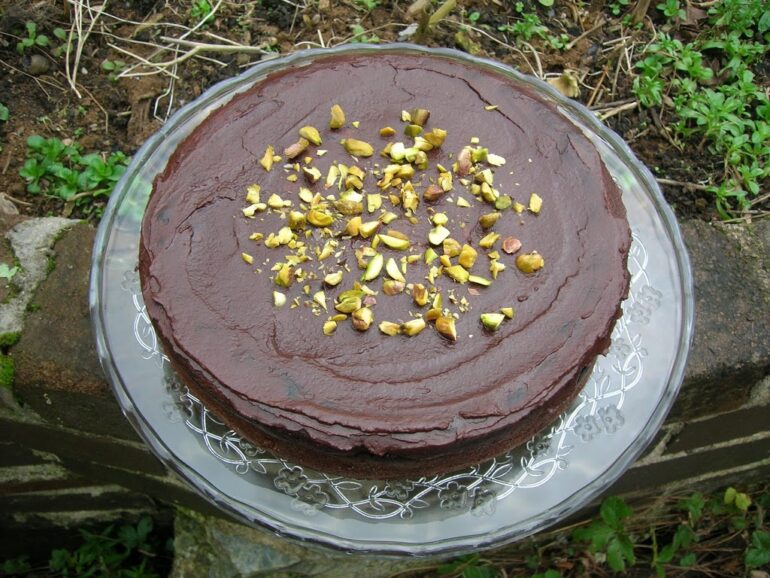 As soon as I saw that this month’s Maison Cupcake’s Forever Nigella challenge had a chocolate theme, I couldn’t resist entering. How could I not? I only have one Nigella book, but its a good one, How to be a Domestic Goddess. As I hunted through it, I came across a rather decadent sounding cake – this chocolate pistachio cake. I was now in a quandary: having no special occasion to celebrate, this was quite an expensive cake for just the two of us. However, what I did have were some pistachios whose sell by date was fast approaching – the deal was sealed!

Nigella blithely states this is a simple cake to make. Well I guess it depends what you mean by simple. Melting chocolate in one bowl, beating egg whites in another and the batter in a third maybe simple, but it involves a lot of washing up. I don’t have a large enough food processor to make cakes in, so I also had to grind up the pistachios in a coffee grinder. On top of this the butter was rock hard and the house not warm enough to soften it properly, so much arm power was needed. So, actually not that simple after all.

As I have said on a number of occasions, I am almost incapable of following a recipe exactly and this time was no exception. As I lack a suitable food processor, I had to follow a different method to Nigella even before I started tinkering with the ingredients. I didn’t quite get what the lemon was about, so I didn’t use it. I also used unrefined granulated sugar rather than caster, as that’s what I had in the cupboard.

When it came to the topping, I was a bit concerned that the pistachio flavour might be overpowered if there was too much of it. As a result, I only made a third of the ganache from Nigella’s recipe. Instead of the orange blossom water, which I didn’t have anyway, I used a home made liqueur. I wanted something that wouldn’t be too strong and fruity, so I used a small amount of homemade sea buckthorn liqueur. But you can use the fruit liqueur of your choice, or the original orange blossom water.

The cake had risen amazingly high when I took it out of the oven but like a soufflé, it quickly sank. Luckily it sank gracefully to a nice flat top. The texture was mousse like, moist, light and smooth in the mouth – not nearly as dense as it looked. The cake itself was not at all sweet, almost savoury in flavour, but the ganache added a dessert quality.

I was slightly concerned that the delicate flavour of pistachios would be lost in the rich chocolate, but no, they had a subtle but definite presence. The nuts also added a slight crunch.

As for the ganache, there was just enough to form a glaze over the top. The liqueur worked well, augmenting the overall effect rather than as a flavour in its own right. I suspect orange blossom water would have been completely drowned out by the rich chocolate. But I won’t know that unless I try it.

Sometimes it’s good to celebrate, even when there’s nothing specific going on. We both very much enjoyed this cake and it will keep us going for a few days.

Thanks for visiting Tin and Thyme. If you make this sumptuous chocolate pistachio cake, I’d love to hear about it in the comments below. And do please rate the recipe. Have you any top tips? Do share photos on your preferred social media site and use the hashtag #tinandthyme, so I can spot them.

If you’d like more large cake recipes, follow the link and you’ll find I have quite a lot of them. All delicious, of course.