Triple trouble, these dark, rich and fudgy triple chocolate almond brownies are way too tempting for anyone supposedly interested in a wholesome diet. Even I can’t kid myself that they are in any way healthy. They are, however, bl**dy delicious and being naturally gluten-free, they’re inclusive too. 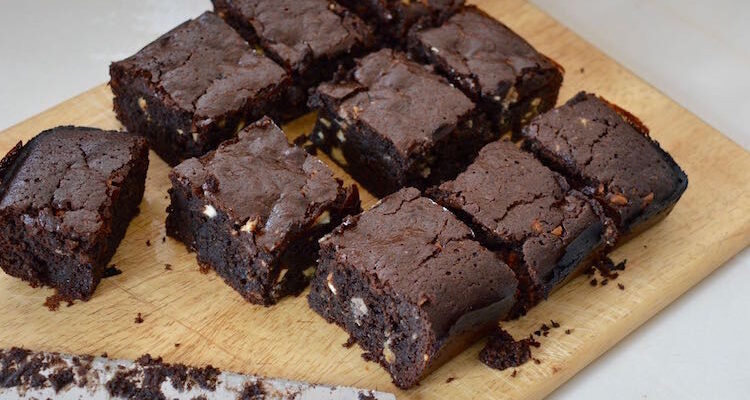 When I tasted my first brownie back in the early 1990s (shock horror), I thought I’d died and gone to heaven. It was pure bliss. I had no idea at the time that they would become one of my staple bakes and that I would make so many variations. A quick check has just shown me that I’ve over 40 different brownie recipes on this blog alone.

I blame an American friend for this fixation and Gina’s fudge brownies was the only recipe I used for many years. Then I started writing a chocolate blog and there was no stopping me.

Brownies are one of the simplest bakes out there and a great thing to make when you need a quick sweet chocolate fix. These days I write less about chocolate indulgence and more about my healthier recipes, but sometimes you just have to let go.

Triple chocolate might be overstating the case slightly. There’s plenty of dark chocolate and white chocolate, but only a smidgen of cocoa powder for an extra bit of dark richness. Despite the inclusion of white chocolate, these triple chocolate almond brownies are a bit more sophisticated than most. They aren’t quite as sweet as your average brownie and the salty bite identifies them as adult fare. But fudgy and delicious they certainly are. The bits of white chocolate caramelise whilst cooking making them even more toothsome.

Who needs loads of washing up at the end of an indulgent baking session? Not me. I developed my one pan brownie method early on in my brownie making career. Admittedly, a second one comes in handy to bake the brownies in, but other than that all that’s needed is a saucepan and a wooden spoon.

The key to making these some of the best brownies I’ve ever eaten is grinding whole almonds just before they go into the mix. This not only allows the nuts to announce their freshness, but it gives an improved texture to the bake too. It’s almost impossible to finely grind every bit of almond, even if you do use my super duper Optimum Vac2 Air Vacuum Blender* – which I did. The advantage of using whole almonds rather than blanched is that you get the additional benefit of eating the skins.

Normally, I use unsalted butter in baking, but I had a feeling salted butter would better support the richness of these triple chocolate almond brownies.

I like to use duck eggs for baking when I can get them and I’m vastly relieved to have found a good source in my new New Forest home. So it was duck eggs rather than hens that went into these triple chocolate almond brownies.

If you’d like to see some more gluten-free recipes, I have quite a few of them.

Thanks for visiting Tin and Thyme. If you make these naturally gluten-free triple chocolate almond brownies, I’d love to hear about it in the comments below. Do share photos on your preferred social media site and use the hashtag #tinandthyme, so I can spot them.

For more gluten-free baking ideas take a look at my Gluten Free category.

Grinding whole almonds generally gives a better texture and flavour than using ready ground almonds.Will keep in an air-tight tin for five days, though they are at their best on day two.
Please note: calories and other nutritional information are per serving. They're approximate and will depend on exact ingredients used.

These triple chocolate almond brownies are my contribution to this month’s #WeShould Cocoa.

I’m also sharing them with #BakingCrumbs which is usually hosted over at Only Crumbs Remain, but is with Jo’s Kitchen Larder for May. Bake of the Week with Mummy Mishaps. Love Cake with JibberJabberUK. Free From Fridays with Le Coin de Mel. And the new linky #G2BGF with Gluten Free Alchemist.

This post contains affiliate links to Froothie Optimum products*. Such links are marked with an asterisk *. Buying through a link will not cost you any more, but I will get a small commission. Thanks to my readers for supporting the brands and organisations that help to keep Tin and Thyme blithe and blogging.