Have you got a half open jar of mincemeat lurking in your fridge? Made a load of homemade mincemeat and not sure what to do with it? We’ve all been there. This collection of vegetarian and vegan recipes using mincemeat is here to help. From a classic mince pie to an easy traybake to a last minute Christmas cake to a warming pudding, you’ll find these and so much more. 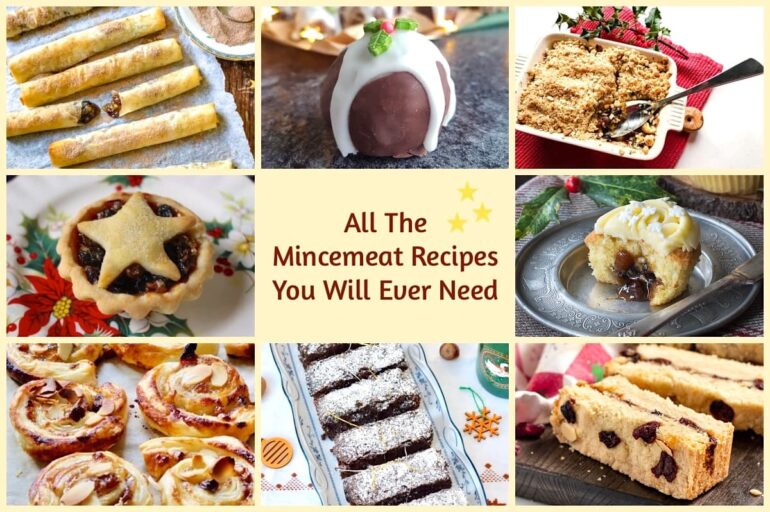 Don’t confuse mincemeat with minced meat. It’s easily done if you’re not in the know. Mincemeat is a very British preserve. Although the name suggests that it’s minced up meat, it’s actually a sweetly spiced mix of soaked dried fruit.

Back in the day, mincemeat did indeed include meat. In medieval times, it was a way of preserving mutton without salt or smoke. But tastes change and as sugar became cheaper so did mincemeat become sweeter. Eventually, at some point in the Victorian era, apples replaced meat, although beef suet was and still is used in many mincemeat recipes. Suet, in case you’re wondering, is kidney fat.

Typically mincemeat consists of raisins, sultanas, currants, sugar, apples, citrus and sweet spices. The spices used are one of, or a combination of, the following: cloves, mace, cinnamon, allspice, nutmeg. It may also contain, alcohol, nuts and some sort of fat.

How Long Does Mincemeat Last?

Because mincemeat is mostly made up of dried fruit and sugar, it actually lasts a really long time. A jar of sealed mincemeat will last for at least a year, usually quite a bit longer. Once opened, however, store in the fridge and use within two months.

Make Your Own Mincemeat

Not all mincemeat is equal. Once you’ve tried homemade, you won’t want to go back to the commercial stuff.

Traditional mincemeat is made with beef suet. This is obviously not suitable for either vegetarians or vegans. It’s easy to buy vegetarian suet so that you can make your own, but if you’re buying mincemeat, do make sure it’s a vegetarian / vegan version.

You can actually make mincemeat without any suet at all, which makes it fat free. Alternatively, use butter instead.

I have two mincemeat recipes on Tin and Thyme. There’s one for lemon and ginger mincemeat and one for chocolate mincemeat. Both are infinitely adaptable. You can leave out the suet and go fat free, swap the alcohol I’ve used for your favourite tipple or use orange juice instead. As for dried fruit, you can go with pretty much whatever you like.

Some of these recipes are perfect for using up leftover mincemeat and some are just waiting for you to open a brand new jar of this gloriously sweet and spicy Christmas special.

Well I guess you can’t have a collection of mincemeat recipes without a few mince pies. After all, no festive party is complete without them.

Mince pies made with mincemeat do not contain any meat. Confused? This will explain what you need to know about this traditional British Christmas treat.
Get the recipe

Nothing says Christmas quite like a mince pie. These ones are made with delicious flaky wholemeal pastry flavoured with orange. Once you'e made the pastry, the rest is a cinch. Use your favourite store bought mincemeat or make your own. It's ever so easy.
Get the recipe

Christmas Mince Pies with a gluten free cherry-almond pastry. These traditional pies are made extra special with a cinnamon-spiced crumble topping.
Get the recipe

Filo Pastry Mince Pie Rolls are a fun way to enjoy the flavours of classic British mincemeat at Christmas. Dried fruit in flaky pastry.
Get the recipe

Puff Pastry Mince Pies are a flaky update on a British Christmas classic. Packed with fruity mincemeat and topped with star shaped lids, my easy pie method bakes up to look simply stunning.
Get the recipe

These Puff Pastry Mince Pie Swirls are super quick & easy to make with all the festive mince pie flavours and almost zero hassle. Now that’s a result.
Get the recipe

It just isn’t Christmas without a batch of homemade mince pies. In this recipe delicious almond pastry is combined with tasty mincemeat to make a vegan version of the Christmas classic.
Get the recipe

If you need a last minute Christmas cake, bake one with mincemeat. They’re ever so easy to make and have a much lighter consistency than a traditional fruit cake. A mincemeat cake also works brilliantly as an Easter cake.

A deliciously moist light fruit cake buzzing with flavour that can be made a few days in advance or right at the last minute.
Get the recipe

Mary Berry’s all in one Mincemeat Loaf Cake is one of the easiest cakes ever! The recipe makes two loaf cakes or four mini loaves.
Get the recipe

This incredible mince pie cake is everything you could want for Christmas. It is a moist cake filled with mincemeat to create a truly delicious mincemeat cake.
Get the recipe

A simple but effective simnel cake flavoured with Amaretto and using mincemeat for the fruit and nut element. This can easily be made at the last minute, although it will also keep for a couple of weeks. Decorated here with chocolate Amaretto truffles instead of marzipan balls.
Get the recipe

Traybakes are general crowd pleasers and they’re easy to make into the bargain. Brownies, flapjacks and slices, take your pick.

A short and crumbly biscuit base, followed by a layer of mincemeat which is topped with a light almond frangipane. Perfect for both lunchboxes and tea parties or as an alternative mince pie.
Get the recipe

An oat and wholemeal base is covered with a layer of chocolate mincemeat which is itself topped with more of the oaty mixture. The chilli is optional. It's delicious and great for Christmas or other festive parties.
Get the recipe

Festive brownies spiced up with mincemeat. They're a real crowd pleaser and perfect for using up any leftover mincemeat. They work well as an alternative Christmas pudding too and they're gluten-free.
Get the recipe

Mincemeat Streusel Slice – Christmas Mince Pies without the fuss! A shortbread traybake with a mincemeat filling & an almond crumble topping.
Get the recipe

Festive flapjacks made with honey, apple and chocolate mincemeat. They make a good alternative to mince pies and are excellent served warm from the oven with custard.
Get the recipe

Vegan Christmas Brownies are the ultimate fusion Christmas treat! With just a few ingredients and simple steps, you’ll be in food heaven % % .
Get the recipe

There’s more to baking with mincemeat than cakes and pies of course. How about a yeasted mincemeat bun of some kind? Muffins are a great way to use up a bit of leftover mincemeat or make it the star of the show in a cupcake or even shortbread.

An enriched slightly sweet dough flavoured with cardamom which is then rolled up with a mincemeat filling and sliced to form individual buns before baking.
Get the recipe

Mince Pie Cupcakes – Almond cupcakes with a festive mincemeat centre and topped with brandy buttercream.
Get the recipe

These buns provide a solution to any post-Christmas leftover mincemeat you might have. If you've got an over-ripe banana, throw that in too.
Get the recipe

An easy recipe for Vegetarian No-Suet Mincemeat Pinwheels, lighter than mince pies for a Christmas buffet table.
Get the recipe

Mincemeat Chelsea Buns with Marzipan are sweet, sticky and filled with fruity flavour. A perfect alternative to mince pies if you fancy something a little different.
Get the recipe

When Stollen meets croissant something totally awesome happens! Not only are these Cheat’s Stollen Croissants easy to make but they’re out of this world!
Get the recipe

All the tasty flavours you’d expect from a mince pie but quicker and easier! These Mincemeat Thumbprint Cookies are the perfect treat for Christmas.
Get the recipe

Christmas Shortbread with a festive layer of mincemeat through the middle. Quick, no fuss & no cookie cutters required!
Get the recipe

Guys, I’m going to let you in on a shocking secret. I’m not a huge fan of mince pies. No, not the ones made with meat, the traditional sweet mince pies served at Christmas.
Get the recipe

These Marzipan & Mincemeat Chelsea Buns are perfect for breakfast on Christmas morning, or just as a festive afternoon treat with a cup of tea!
Get the recipe

In the depths of winter, a hot pudding filled with mincemeat is comfort food at its best. Or a completely hideous thought in CT’s case. But the less said about that, the better. With that said, ice-cream is an all year winner for many, so you’ll find a recipe for that too. And don’t forget some decadent truffles to go with coffee and finish off the meal in style.

Mincemeat and Apple Crumble is a festive twist on the classic apple crumble dessert. Tangy slices of apple combine with rich mincemeat and a delicate crumble topping, it’s perfect comfort food for the darkest days of winter.
Get the recipe

Four layers of spicy, sweet, fruity sumptuousness come together in this mincemeat tart. It starts with melt-in the mouth spelt and almond pastry which is good enough to eat all by itself. The meringue topping splits into a crunchy crust on top and a billowy marshmallow layer below. And the filling is, of course, mincemeat. It makes a delightful winter dessert and can even stand in for the Christmas pudding.
Get the recipe

Crisp melt in the mouth hazelnut and orange pastry case filled with pears and sweet mincemeat.
Get the recipe

A festive pud to get you in the mood for Christmas or an easy peasy way of using up leftover mincemeat after Christmas, these Baked Apples with Mincemeat, Maple Syrup and Brandy Butter are sure to hit the spot!
Get the recipe

Decadently creamy, richly spiced, fruity and a little bit boozy. Best of all, it’s no churn and takes about ten minutes to make. Vegan option included.
Get the recipe

Thanks for visiting Tin and Thyme. I hope you’ve found something to inspire you with all these delicious mincemeat recipes. Let me know if you try any of them. I’m also keen to know what I’ve missed? What are your favourites? Do tell by commenting below.

If you’re a blogger and think you have something that will fill a gap, please contact me.

If you’d like more Christmas recipes, follow the link and you’ll find I have quite a lot of them. All delicious and nutritious, of course.

I’m sharing this collection of mincemeat recipes with The Gluten Free Alchemist for #CookBlogShare.