Nothing says Christmas quite like a mince pie. These mince pies are made with delicious flaky wholemeal pastry flavoured with orange. Once you’e made the pastry, the rest is a cinch. Use your favourite store bought mincemeat or make your own. 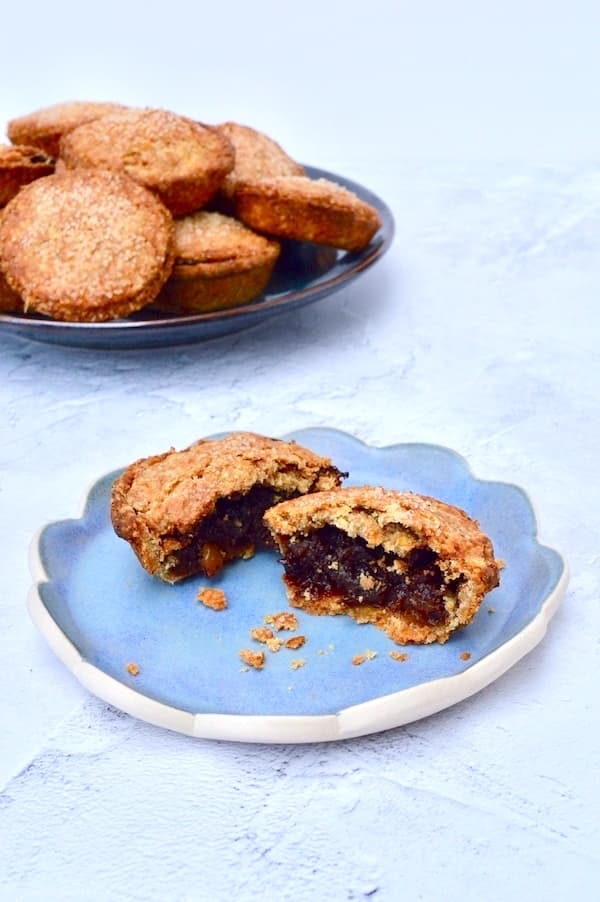 This could well have been my entry for this month’s orange We Should Cocoa challenge, but delicious as these mince pies are, I already have something ear-marked for that. But these mince pies are gorgeous, some of the nicest I’ve ever eaten. In fact, they’re the only mince pies CT has eaten and liked. Now you can’t say much better than that.

How to Eat a Mince Pie – The Cornish Way

One of our Cornish friends introduced us to this “traditional” way of putting clotted cream inside the pie rather than on top. What a brilliant idea and one which I’ve now adopted. Well at least I do when I can get the lid off.

The first time I made these mince pies for the blog, the photographs were awful (see above). I’d made and served them up at a Christmas tea party and after a couple of glasses of mulled wine, taking photographs was not top of my list of priorities. These photos aren’t much better as I managed to leave the majority of the pies in the oven a touch too long and they’re rather more golden than I’d have wished.

Luckily, the overly bronzed appearance of this latest batch of mince pies didn’t affect the eating experience. The pastry was still crisp, flaky and delicious. I forget just how good a homemade mince pie is until I sink my teeth into one. I like them best when they’re warm and accompanied by clotted cream.

As CT’s not really a fan of mincemeat, I made a few shallow pies, so the mincemeat to pastry ratio was less. So for the recipe I’ve given below, I made seventeen pies. But you should get fourteen or maybe fifteen.

These orange wholemeal pastry mince pies will store well in an airtight container for at least a week.

Wholemeal pastry is really tasty, it seems a shame more people don’t make it. It has a lovely nutty flavour as well as a lovely crumbly texture. I make this wholemeal shortcrust pastry with both orange zest and juice. I also use a whole egg. This makes the pastry easy to work with and wonderfully short.

Once you’ve made the pastry, most of the work is over. All you need to do now is roll it out, cut out the pastry cases and lids, then fill the cases with mincemeat. Try not to overfill the cases, it’s best to leave a small gap to allow the mincemeat to expand during cooking.

It’s important you seal the lids prior to cooking. Do this by gently pressing the lid edges into the sides of the pastry cases.

Once this is done, I like to brush the lids with milk and either sprinkle a little caster sugar over the tops or scatter on a few flaked almonds.

Bake the pies in the middle of a hot oven, but check on them after the first twenty minutes. The pastry should be crisp and golden, but not as brown as the ones you can see in most of these photos. If they’re not quite done, give them another few minutes and check again.

I baked a second batch of five in a muffin tin and was a bit more careful this time. So, if you look closely, you can see a few that are cooked to perfection.

Why Do You Need To Rest Pastry?

It’s best to rest the dough at least fifteen minutes in a cool place before you roll it out. This allows the gluten to relax, which means the pastry is easier to roll, keeps its shape better and is less likely to be tough. It also gives the fat a chance to firm up if it’s become too soft during the rubbing in process.

Most recipes advise you to rest it in the fridge, but I find the dough is generally too hard to roll out if you do this. So I only ever put it in the fridge if the kitchen is really hot. But I do place it in a cool part of the house.

I also use my own homemade chocolate mincemeat. Once you’ve made your own mincemeat, it’s hard to go back to the bought stuff. It’s never the same twice as I use whatever fruit and chocolate I have in the house and I like to vary the alcohol I use too.

Chilli chocolate mincemeat is probably my favourite, but it’s not to everyone’s taste. So feel free to omit the chilli if you make this recipe. Alternatively, you could try my recipe for lemon and ginger mincemeat. It’s very nearly as good.

Thanks for visiting Tin and Thyme. If you try these orange wholemeal pastry mince pies, I’d love to hear about it in the comments below. And do please rate the recipe. Have you any top tips? Do share photos on social media too and use the hashtag #tinandthyme, so I can spot them.

If you’d like more side dish recipes, follow the link and you’ll find I have quite a lot of them. All delicious, of course.

Nothing says Christmas quite like a mince pie. These ones are made with delicious flaky wholemeal pastry flavoured with orange. Once you'e made the pastry, the rest is a cinch. Use your favourite store bought mincemeat or make your own. It's ever so easy.
Prep Time20 mins
Cook Time20 mins
Total Time40 mins
Course: Afternoon Tea, Dessert, Snack
Cuisine: British
Keyword: mincemeat, oranges, pastry, wholemeal flour
Servings: 15 pies
Calories: 220kcal
Author: Choclette @ Tin and Thyme

Delicious eaten warm with copious amounts of clotted cream.Will store well in an airtight container for a week.Please note: calories and other nutritional information are per serving. They’re approximate and will depend on exact ingredients used.

These orange wholemeal pastry mince pies are my contribution to the fabulous Christmas tea hosted this month by Kate of What Kate Baked. Can’t wait for that groaning table of festive goodies! The tea party is one of many hosted by Kate or Karen of Lavender and Lovage for their Tea Time Treats event.