These almond mincemeat slices are a true delight. You’ll find a short and crumbly biscuit base, followed by a layer of chocolate mincemeat which is topped with a light almond frangipane. They’re perfect for both lunchboxes and tea parties.

If you’re anything like me, you will have odds and ends of recipes scattered around the house, used as bookmarks, scribbled on scraps or in piles somewhere or other. And never to be found when needed. I keep meaning to get organised. Promises made to collect my favourite not-to-be-forgotten recipes in one place. But somehow I don’t seem to have managed it – yet.

Recently, I was sent A Cake Lover’s Recipe Notebook by Jane Brocket which would be perfect for this exercise or at least for keeping all my favourite cake recipes together. Published by Jacqui Small, it comes as a spiral bound hardback measuring roughly 20 x 23cm with a pretty vintage style textured cloth cover. The notebook is divided into sections, mostly categorised by type of cake and separated by tabs. 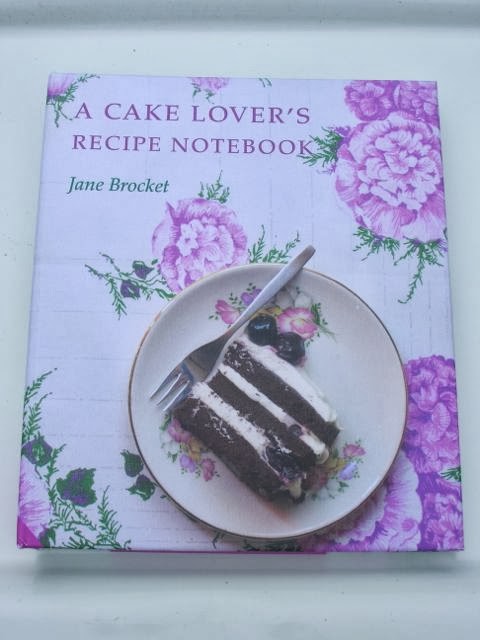 It starts with an introduction, encouragingly entitled, let’s eat cake which celebrates the joy of baking. There then follows a chapter on baking essentials, which usefully outlines essential ingredients, equipment, methods and techniques. At the back of the book, you can find a list of  addresses for suppliers. Each section includes two pre-prepared recipes. These aren’t meant to be particularly innovative, but classic cakes which, we are assured, are failsafe and perfect for the beginner. The recipes are all accompanied by beautiful vintage type illustrations that make me want to throw a tea party immediately. 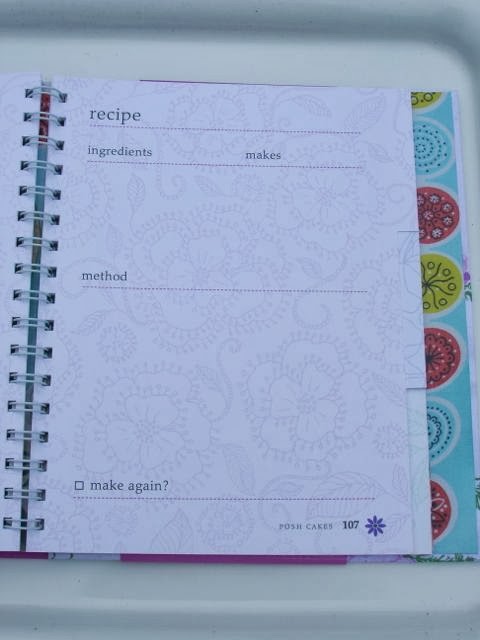 Each section has about 16 recipe cards. There’s space for ingredients, method and what size cake it makes or how many. It also has a handy little tick box for “make again”. There is a page to list the shape, size and number of your baking tins (or moulds in my case). I think I shall find this particularly useful as I don’t have room to keep them all in one cupboard or even in the kitchen. So I often lose track of what I’ve actually got. At the back of the book, you will find pages for notes as well as favourite cake and baking shops, an idea I felt was particularly appealing.

So, out of the twelve recipes included in the notebook, three of them were chocolate ones. What a relief. I didn’t fancy making brownies however, nor mocha cake or a bûche de Noël. Initially I considered trying out the recipe for fondant fancies and covering them with chocolate icing. In the end though, I decided to adapt the almond slice recipe instead. 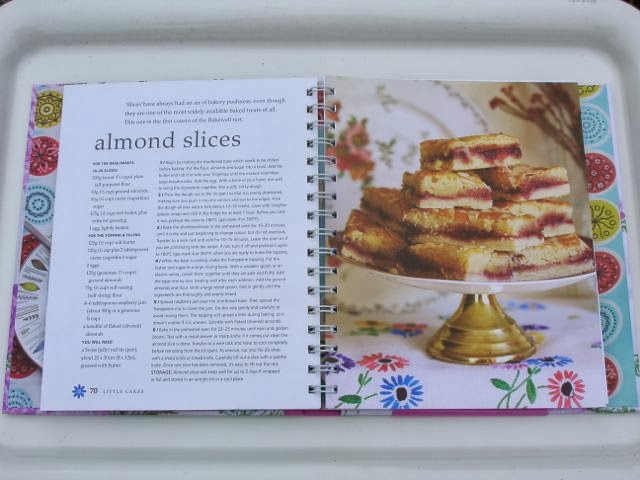 I had a jar of my chilli chocolate mincemeat left over from the Christmas before last and it was in need of using up. What an ideal substitute for the raspberry jam in the recipe, I thought. So I proceeded, but adapted the recipe, as I usually do. I made only half the quantity as sadly, I had no tea party to give. And more importantly, CT doesn’t like mincemeat. 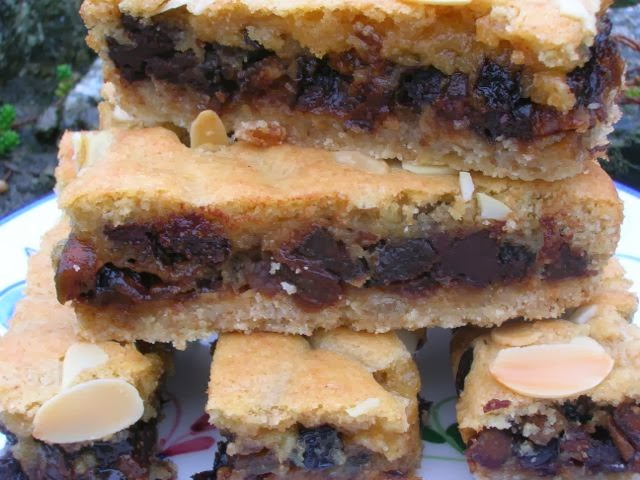 As long as you have a jar of mincemeat to hand, these almond mincemeat slices are really quite simple to make. You don’t have to use homemade chocolate mincemeat, of course, but it does make for a particularly delicious slice. The shortbread base is super easy. All you need to do is mix the ingredients, then press down into the baking tin with a back of the spoon. Pop this into the oven whilst you make the frangipane topping.

These slices are a true delight. The shortbread base is short and crumbly, the frangipane top is light and almondy and the chocolate mincemeat holds it all together very nicely. The slices will last for a few days in a sealed container. They’re great for livening up a lunchbox, but they’re also good for parties. Not only are they delicious, but they can be made in advance. They make a nice alternative to mince pies at Christmas too.

Thanks for visiting Tin and Thyme. If you make these almond mincemeat slices, I’d love to hear about it in the comments below. Do share photos on social media too and use the hashtag #tinandthyme, so I can spot them.

If you’d like to see some more ideas for either homemade mincemeat or how to use it, why not take a look at my mincemeat recipes? 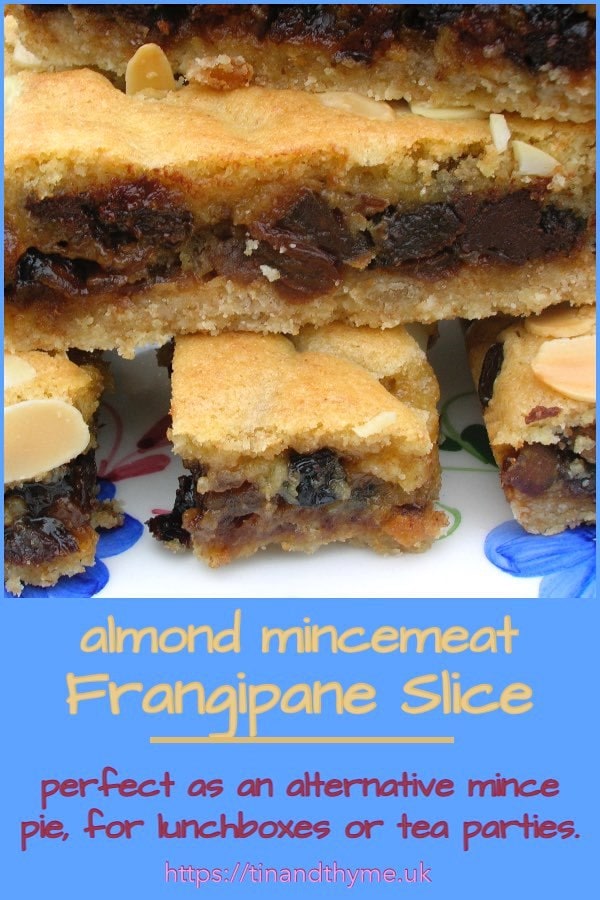 As my mincemeat was about to walk out of the cupboard and into the bin, I just got there in time. So I’m submitting this to the No Waste Food Challenge, normally hosted by Elizabeth’s Kitchen but this month by the wonderful Chris of Cooking Around the World.

Thanks to Jacqui Small for the notebook. There was no requirement to write a positive review and as always all opinions are my own.

Jacqui Small have kindly agreed to give two of my readers a copy of A Cake Lover’s Recipe Notebook. To be in with a chance of winning, please fill in the Gleam widget below. You will need to leave a comment on this post which then gives you additional chances to enter if you so wish. Gleam will pick a winner at random from the entries received. If you are commenting anonymously, please give me some way of identifying you as I will be verifying the validity of entries. Any automated or invalid entries will be disqualified. This giveaway is only open to those with a UK postal address. Winners will need to respond within 7 days of being contacted. Failure to do this will result in another winner being picked.

Prizes are offered and provided by Jacqui Small. Chocolate Log Blog accepts no responsibility for the acts or defaults of said third party.
Closing date is Monday 31st March 2014
Do take a look at the Chocolate Log Blog giveaway page to see if there is anything else you would like to enter.