Small batch recipe for quick and easy blackcurrant jam. Made with less sugar than most recipes suggest, it’s sweet and sharp with a lovely fruity flavour. The addition of chilli gives a delicious warmth that’s very much present, but not completely obvious. It also complements the blackcurrant notes beautifully. Try it once and you won’t look back. 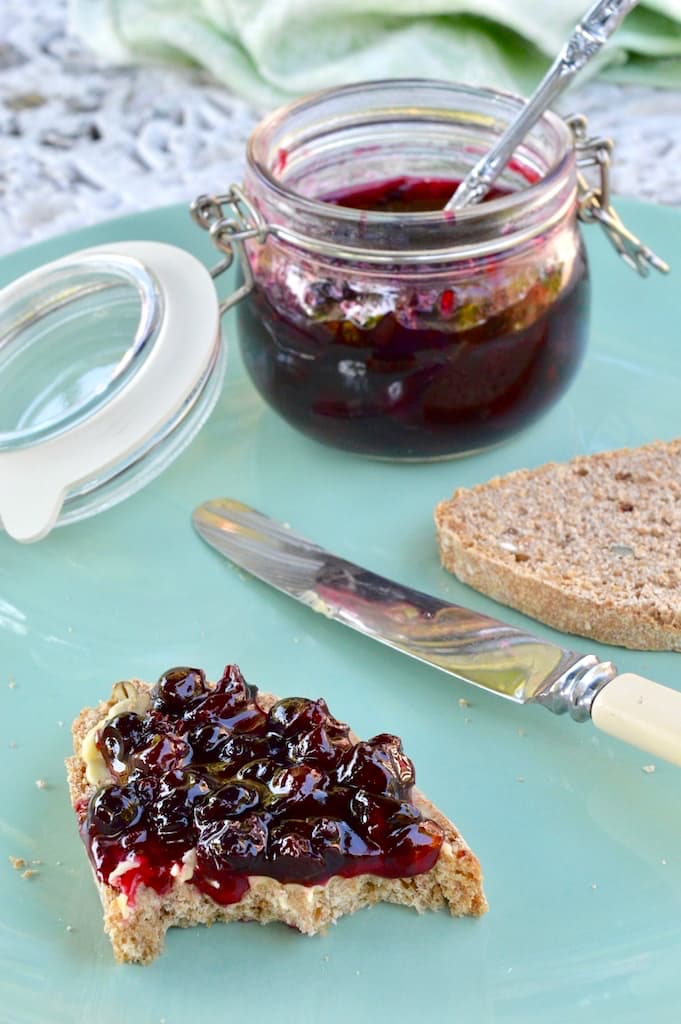 Blackcurrant jam was one of the first jams I learned to make when I was growing up. That’s mostly because my mother grew a lot of blackcurrants in her garden. She still does in fact. But also because it’s one of the easiest jams you can make.

The idea of flavouring blackcurrant jam with chillies is not my own. But when I came across it several years ago, I had to try it and I’ve not looked back since.

No, blackcurrant jam doesn’t need any additional pectin. Nor does it need to be made with jam sugar. Blackcurrants have plenty of pectin of their own. This makes blackcurrant jam one of the easiest jams to make. It sets quickly and easily.

In fact I never add either jam sugar or commercial pectin to any of the jams I make. If fruit is low in pectin, I’ll add some other fruit which is high in it to compensate. Lemons are one of the best as they tend to bring out the flavour of the original fruit, rather than mask it. So, for example, my easy strawberry jam is made with three ingredients only: strawberries, sugar and lemon.

Apples are also a good fruit to use as they are high in pectin and don’t have too much flavour of their own. They’re good to use alongside fruits that need some extra bulk as well as pectin. This fig, apple and pomegranate jam is a good example.

Like raspberry jam, it’s a little seedy. If you find this really unappealing, you could cook the blackcurrants first and pass them through a sieve. But that’s really quite a faff and you’d be better off making blackcurrant jelly instead. You can follow my recipe for hedgerow jelly if you want to go down this route.

The quantities I’ve given in the recipe is for a small batch. It makes three 250 ml jars. As it’s only a small amount, it doesn’t take long to reach setting point. Somewhere between five and ten minutes should do it. But if you double or triple the quantities, it will take longer.

It’s a good idea to add labels unless you’re going to be eating the jam right away. I usually don’t bother but regret it later when I find jars several months down the line and wonder what on earth is in them.

Blackcurrant jam is at its best in the first six months, but it should last for up to a year if you keep it in a cool dark place. Once you’ve opened the jar, however, it’s best to keep it in the fridge.

How To Make Easy Blackcurrant Jam

You can make this easy blackcurrant jam in two simple stages. The whole thing should be done within twenty minutes, twenty five at the most. Before you start, wash and sterilise your jars. If you’re not sure how to do this, I have a whole post on how to sterilise glass jars and lids.

Find a large saucepan and place the blackcurrants, water and chilli (if using) in it. Bring to the boil, then simmer for five minutes or until the currants are soft.

Turn off the heat and add the sugar. Stir until all of the crystals have dissolved.

Place the pan back on a medium high heat and bring the blackcurrants to a rolling boil. Boil for five minutes then take the pan off the heat and test to see if the jam has set. See the section on how to do this a little further down the post.

If it hasn’t place the pan back on the heat and continue to boil for a further two minutes.

If any scum forms on the top, remove it with a metal spoon. I find it rarely does with blackcurrant jam though.

As soon as setting point is reached, give it a good stir and pour the jam into your warm sterilised jars. It’s best to fill them almost to the top as this helps prevent spoilage. I use a stainless steel ladle and stainless steel jam funnel* as they can both handle hot liquids and I can sterilise them easily along with the jars.

Clap the lids on and twist them tight. Then label. As soon as the jars are cool, you can put them away to store.

The secret to using chilli in this blackcurrant jam is to add just enough to give a gentle warmth, but not enough so that anyone would know it’s there. It’s not just the warmth that makes this jam so special though. Depending on what sort of chilli you use, it imparts its own subtle flavour to the jam, which makes it even more delicious. I only ever make blackcurrant jam with chillies now.

How much chilli you use will very much depend on the type of chilli and how hot it is. For the recipe I’ve stated one red chilli, but you might want more or less. Chop it finely and add at the simmering stage. You can leave the seeds in or out. Again, it will depend on how hot your chilli is.

We grow rocoto chillies, which are large, fleshy and quite hot. They work well in this sort of concoction. We keep a load of them in the freezer, halved and already deseeded. I use one half only. The heat is just right for us. There is a definite warmth, but steam doesn’t come screaming out of your ears.

I got the idea to add chillies to this jam from the queen of preserves Vivien Lloyd via Katie over at Feeding Boys and a Firefighter. It was Sue at A Little Bit of Heaven on a Plate that suggested it and what a brilliant suggestion it was. Rather than add the chilli to a muslin bag and pull it out at a later date, I add the chillies directly.

How To Tell When Jam Is Set

To test for setting point, use the wrinkle test. Remove the pan from the heat after it’s boiled for five minutes. Place half a teaspoon of the blackcurrant liquid onto a cold plate. Leave for thirty seconds, then push your finger up against the jam. If it wrinkles it’s set. If it’s still runny, it’s not. Boil the jam for two more minutes and test again. Repeat until the jam is set.

Before you start to make the jam, place a couple of saucers in the fridge or freezer. Use these to test if your jam is set.

Alternatively you can use a thermometer. As soon as the temperature reaches 105℃/220°F, it should be set. I’ve never used a thermometer, however, as the wrinkle test is simple and it works well for me.

If you don’t have fresh blackcurrants, it’s fine to use frozen ones. You will need to add a few extra to the recipe though. Use four hundred and forty grams, rather than four hundred.

Defrost the currants first, then continue as per the recipe.

How To Use Blackcurrant Jam

Blackcurrant jam is delicious, but as it has quite a robust flavour, it tends to appeal to adults rather than children. It was my least favourite jam when I was a child, but now I really like it.

As with any other jam, it’s delicious just spread on bread with butter. Likewise it’s just what you need for a good cream tea, along with homemade scones and Cornish clotted cream. In fact it goes particularly well with these dark chocolate scones.

You can use it to sandwich cakes together. Why not try it in a Victoria sponge to ring the changes? However, its robust nature really lends itself well to chocolate bakes. You can see this in action with this Scandinavian chocolate cake and these chocolate Viennese whirls.

And of course, don’t forget about the humble jam tart. Homemade pastry filled with homemade jam is both satisfying and a real treat.

There are plenty of other bakes in which to try out your blackcurrant jam. I’m always coming up with new ways to use jam as I often find old jars of the stuff hiding in the back of the cupboard. So here are a few more ideas: blackcurrant honey cakes, jammy flapjacks and hot chocolate Victoria sandwich.

And don’t forget it as a breakfast delicacy either. A spoonful on top of a bowl of porridge is a lovely way to start the day. Or better still, why not try it on my chocolate porridge?

Thanks for visiting Tin and Thyme. If you make this easy blackcurrant jam, I’d love to hear about it in the comments below. And do please rate the recipe. Have you any top tips? Do share photos on social media too and use the hashtag #tinandthyme, so I can spot them.

If you’d like more recipes for preserves, follow the link and you’ll find I have quite a lot of them. All delicious and nutritious, of course. And for more blackcurrant recipes, I have a post on All The Blackcurrant Recipes You Will Ever Need.

To make 4-5 jars instead of 3, use the following quantities:

Prep time will very much depend on what state your blackcurrants are in. If they’re homegrown, this obviously doesn’t include picking time and you may need to strip them off of their stalks if that hasn’t already been done. For the purposes of this recipe, I’m assuming the blackcurrants are ready to go.

To test for setting point use the wrinkle test. Remove the pan from the heat after it’s boiled for five minutes. Place half a teaspoon of the jam onto a cold plate. Leave for thirty seconds, then push your finger up against the jam. If it wrinkles it’s set. If it’s still runny, it’s not. Boil the jam for two more minutes and test again. Repeat until the jam is set.

How Long Will It Last?

Blackcurrant jam is at its best in the first six months, but it should last for up to a year if you keep it in a cool dark place. Once you’ve opened the jar, however, it’s best to keep it in the fridge.Please note: calories and other nutritional information are per serving. They’re approximate and will depend on exact ingredients used.

Previous Post: « All The Courgette Recipes You Will Ever Need
Next Post: The Best Chickpea Salad (Middle Eastern Balela Salad) »