Blackcurrants are available for a limited season only. This makes these dark purple fruit, with their fresh, sweet and tart flavour, even more appealing. They have a number of health benefits too. If you’re lucky enough to get hold of any, but are wondering what to do with them, these blackcurrant recipes are here to help you out. 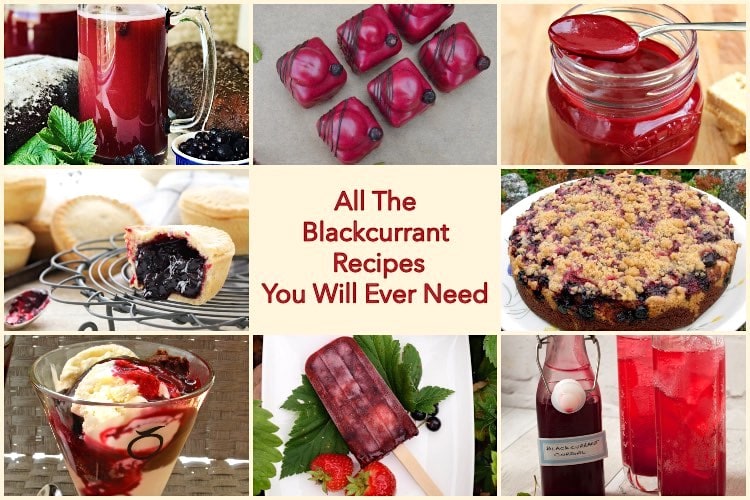 July is the season for blackcurrants (Ribes nigrum) here in the Northern hemisphere. For me, blackcurrants are redolent of this, my birthday month. I’ve spent many weeks in July picking blackcurrants, either in our allotment, at friends, but mostly in my mother’s garden. She has the most phenomenal blackcurrant bushes that are now well over fifty years old and still producing prolifically.

Britain with its cool and wet climate grows them very well. I say cool and wet, it’s been extremely dry in my part of Britain this year and the garden and allotment are suffering for it.

Yes, we have an allotment again. We picked up the keys to our new one just a few days ago. It’s in a dreadful state and will require a lot of work to get it into any kind of order. But, it has some fruit bushes on it, including blackcurrants.

If you don’t grow your own or have family and friends that do, look out for them at farmer’s markets. There are also lots of pick your own sites around the UK. Look for dark plump currants with shiny, unbroken skins.

Blackcurrants freeze really well, so if you manage to get hold of more than you need, you can just pop them into the freezer. Place in a sealed bag or container and freeze for up to six months. Unlike many berries, they also store well in the fridge and should be good to go for five or six days after picking.

CT bought a load home from work the other day. As it’s so hot, we’ve mostly been enjoying them as this strawberry rose mint fizz. Only we’ve replaced the strawberries with blackcurrants. I’ve also frozen a load, made smoothies and a blackcurrant fool.

Blackcurrants have long been known as a health food. They are indeed one of Britain’s top superfoods. They’re chock full of vitamin C after all. Indeed they have four times the amount that oranges have.

But in addition, that dark colour denotes an abundance of antioxidants, specifically anthocyanins. It has double the amount that blueberries have. Plus they contain a decent amount of gamma-linolenic acid.

They are said to boost the immune system, improve eye function and promote levels of healthy bacteria in the gut. Amongst many additional health claims, blackcurrants are meant to be beneficial for stiff muscles and joints and can ease flue symptoms. Personally, I think blackcurrants are fabulous. They taste good too.

All The Blackcurrant Recipes You Will Ever Need

All the blackcurrant recipes you will ever need, may be a bit of a tall claim, but bear with me. I shall be adding to this list as and when I come across suitable ideas. Many of the recipes here can easily be adapted to suit what you have to hand and your own needs.

Blackcurrant compote on top of porridge in the middle of winter is pure delight. You have zing and a beautiful vibrant colour to liven the porridge as well as a taste of summer. I usually try to freeze a few for this very purpose.

There are more ways to enjoy blackcurrants for breakfast however. They’re great in smoothies. Just replace the blueberries and apple with blackcurrants in this blueberry kefir smoothie. Or follow the recipe below.

Blackcurrant pancakes from All That I’m Eating

Wheatberry currant salad from Running to the Kitchen

Blackcurrants make a wonderful fresh, tart and flavoursome addition to bakes. Add them to, or even on top of, cakes, muffins, scones or cookies. They also make for delicious and colourful tarts and pies. The fruits are best used whole, but you can easily make a puree of them too by mashing them up and pushing through a sieve.

Blackcurrant brownies from me at Tin and Thyme

Chocolate blackcurrant buckle from me at Tin and Thyme

Chocolate & blackcurrant roulade from me at Tin and Thyme

White chocolate blackcurrant blondies from All That I’m Eating

White chocolate blackcurrant cookies from me at Tin and Thyme

When it comes to blackcurrant puddings, the first thing that springs to mind is summer pudding. It’s a classic British dessert that both my aunts and my mother used to make. I was never very keen as they made it too tart for my youthful tastes. But I reckon I’d appreciate it much more now. Janice’s late summer pudding recipe below sounds superb with its addition of Framboise.

Blackcurrant season is full on summer when frozen desserts come into their own. Blackcurrants make a deliciously refreshing ice-cream or sorbet to help us cope with the hot, hot weather.

Blackcurrant ripple ice cream from me at Tin and Thyme

Blackcurrant sorbet from Only Crumbs Remain

Chocolate sundae royale from me at Tin and Thyme

I do love to preserve gluts of food so they can be used when the season is but a memory. Jam is the classic way to preserve them. There’s more than one way to make it as you will see below. I also have a fabulous recipe for chilli blackcurrant jam which used to languish in the middle of my blackcurrant brownies post. It now has its very own place in the spotlight. The chilli gives the jam a bit of a lift, but doesn’t blow your head off.

But don’t be tied down to just jam. Have you tried making your own cordial or fruit liqueurs? How about blackcurrant curd or even vinegar?

Blackcurrant cordial from Recipes Made Easy

Easy homemade cassis from me at Tin and Thyme

Blackcurrant gin from Practical Self Reliance

How to make blackcurrant mead from Practical Self Reliance

Blackcurrant vinegar from me at Tin and Thyme

How to make blackcurrant jam from Farmersgirl Kitchen

I hope you’ve found something to inspire you with all these beautiful blackcurrant recipes. Let me know if you try any of them. I’m also keen to know what I’ve missed? What are your favourites? Do tell by commenting below.

If you’re a blogger and think you have something that will fill a gap, please contact me.

All The Blackcurrant Recipes You Will Ever Need. PIN IT.