A quick and simple recipe to get something sweet and delicious onto the teatime table in record time. These jammy flapjacks contain only three ingredients and can be gluten-free if you use the right oats. For extra pizazz you can drizzle some chocolate over the top if you like. 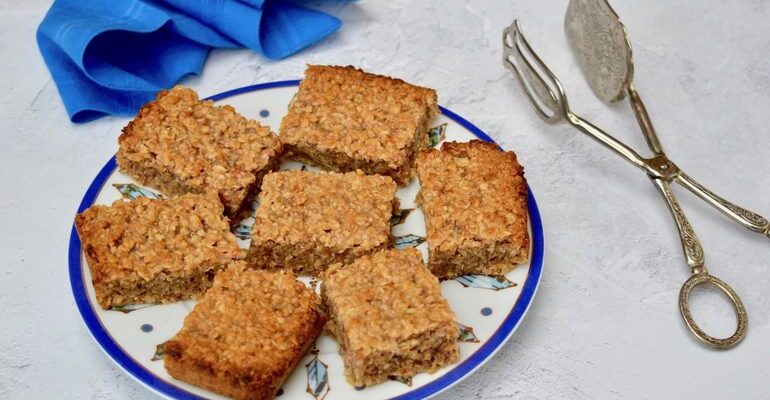 Leftovers seem to be the name of the game at the moment, with all the post Easter talk of ways of using up leftover chocolate. A couple of my recipes even got a mention in The Guardian.

When I heard that this month’s Tea Time Treats was all about preserves, my brain somewhat guiltily turned to my stash of ancient jam. I make jam and have all sorts of fanciful ideas of throwing tea parties with grand cakes and scones, jam and cream. I do manage it occasionally, but rarely often enough to use up all the jam I make.

Once upon a time, I made this most delicious fig, apple and pomegranate jam. Eighteen months on and I still have a couple of jars of it left. Or I did have; I’ve just used one of them up in these jam flapjacks. Instead of making flapjacks with sugar and golden syrup, I thought I’d try making some with jam. This seemed a good flavour to use as it’s quite tart and I didn’t want my flapjacks to be sickly sweet, especially as I was going to use a whole jar.

These jam flapjacks have to be the quickest bake I’ve ever made. The recipe is so simple. Luckily, they turned out to be rather good and I’m feeling pleased with myself for discovering another way of using jam.

I also had some chocolate sauce leftover from my Easter bundt cake, which in itself was leftover from the Easter egg ice-cream. This really is the last of it – honest! I warmed it up and drizzled it over the flapjack in an attempt to make them slightly more sophisticated.

Some of the flapjacks went to the workmen who were putting up a fence in next door’s garden. I’m very excited about this as we have our privacy back again. A couple of years ago, the neighbours  chopped down the hedge and it’s been a bit trying to say the least.

I was also rather excited to find I’d won a £20 voucher from Your Liskeard to spend in local shops by sending in a photo of the oats I’d bought to make these jam flapjacks. There is a weekly prize for a photo that shows something bought from a local shop. What a fabulous way of to promote Liskeard’s retailers.

Thanks for visiting Tin and Thyme. If you make these jam flapjacks, I’d love to hear about it in the comments below. Do share photos on social media too and use the hashtag #tinandthyme, so I can spot them.

If you’re after more flapjack ideas, I have quite a few recipes in my Flapjacks category.

I’m sending these jammy flapjacks off to the ever groaning Tea Time Treats table. Who’s going to join me there? It just so happened that Karen chose Jams, Curds and Preserves as this month’s theme.

As I cut these into fairly small squares and tried to make them look, er, dainty, I’m also entering my jammy flapjacks into Treat Petite with Cakeyboi and The Baking Explorer. The theme is Spring into Easter this month. Whilst the flapjacks aren’t specifically spring like, they are drizzled with chocolate. Now if that doesn’t make you think of Easter, nothing will 😉

The mega amount of leftovers used in this recipe qualifies me for the No Waste Food Challenge from Elizabeth’s Kitchen. This month it’s hosted by JibberJabberUK.

And such a frugal recipe as this just has to be added to Credit Crunch Munch which is hosted over at Fab Food 4 All and Fuss Free Flavours.

As the oats were bought from our local health food shop and won a prize for me into the bargain, I am entering these oaty flapjacks into Shop Local over at Elizabeth’s Kitchen.

Finally, as these saucy jammy flapjacks are definitely my idea of fun, I’m sending them off to Laura at I’d Much Rather Bake Than … for her monthly Biscuit Barrel challenge.