A not quite classic Victoria sponge cake. but a most delicious one. This hot chocolate Victoria sandwich is made with drinking chocolate, so it’s lightly chocolatey, but not dominant. It’s filled with vanilla apricot jam and whipped cream.

Whilst leafing through How to be a Domestic Goddess the other night, I spotted Nigella’s treatise on Victoria sponges. As it happened, she didn’t have a chocolate one, but I was inspired by her to create my own for the Cornwall Clandestine Cake Club (CCC). The theme was afternoon tea, so what could be more appropriate than a Victoria sandwich?

I was also inspired by Karen’s drinking chocolate cake over at Lavender and Lovage. So I decided to use a drinking chocolate mix rather than cocoa. My hot chocolate Victoria sandwich was thus born. As I was planning on using the vanilla apricot jam I made before Christmas, I wanted the chocolate to take a lighter note and not be the dominant flavour. I reckoned this would allow the apricot and vanilla flavours to shine through.

It all turned out exactly as I was hoping. Except for a minor disaster during the baking process.

One of my cakes broke up a little when I turned it out. How very annoying. This is a rare occurrence for me as I use silicone moulds to bake my cakes in. I’m always taken aback when it happens and not best pleased. Luckily, I managed to rescue it by gluing most of it back together with the jam and using it as the bottom layer.

My goodness that vanilla apricot jam was good. The cake wasn’t bad either. Others thought so too and demonstrated their appreciation by coming up for seconds. No mean feat with the vast array of cakes available.

Our CCC event took place at Lanhydrock. Lanhydrock is a vast and beautiful National Trust estate and it’s just up the road from us – in Cornwall terms anyway. We held our meeting in one of the offices away from the main house, a pleasant corner of the estate I’d not seen before. We were in the converted stables, recently revamped, and they made an excellent location for our gathering. 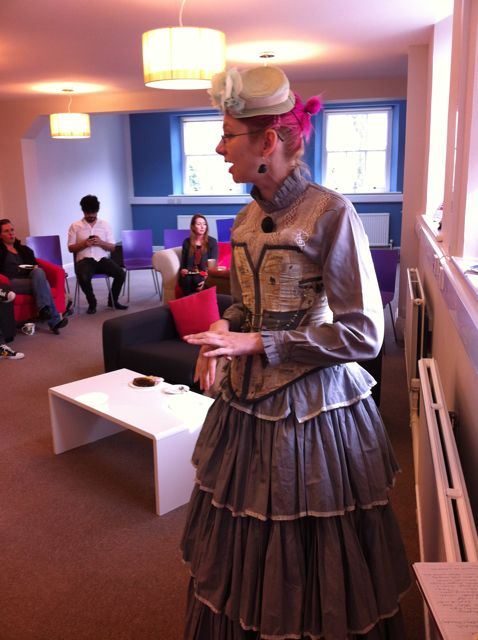 The cakes were many, splendid and varied. To top it all we had an informative and entertaining talk by Sue Bamford on the surprisingly dramatic history of afternoon tea. Who knew that a married woman in Victorian times could entertain a male guest in her dressing gown for tea, but was unable to do so fully dressed for dinner?

Many thanks to Ellie Michell for continuing to organise our wonderful cakey gatherings. As I said the cakes were many and varied and I rather lost the plot on what they were, who had baked them and whether I’d photographed them or not. So here follows a random selection:

Inspired by Nigella as it was, I’m sending my hot chocolate Victoria sandwich off for Forever Nigella. Created by Maison Cupcake, the theme this month is Easter. And I reckon this would make a perfect cake for Easter tea. What do you reckon?

As I used four very large duck eggs which were coming to the end of their useful life, I’m entering this to the No Waste Food Challenge. This was created by Kate of Turquoise Lemons but is hosted, this month, by Elizabeth’s Kitchen Diary. The theme is eggs.

Although most of my bakes are entirely made from scratch, I don’t often remember to submit them to Javelin Warrior’s Made with Love Mondays. Luckily, I’ve remembered this time.