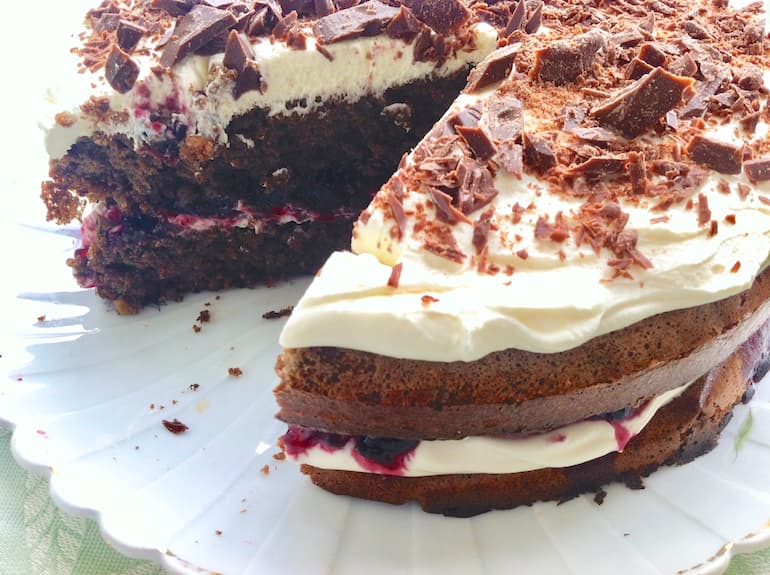 I must be better. My baking mojo has returned and I almost leapt out of bed this morning thinking I’m going to bake that Scandinavian chocolate cake that’s been on my mind. I know January isn’t traditionally the time for indulgence, but because we were both ill, CT and I had quite an abstemious Christmas, so I feel justified in making and eating a few ‘naughty’ things.

Trine Hahnemann’s book, Scandinavian Baking, passed briefly through my hands a while back. There were many gorgeous recipes which all seemed to contain some of my favourite indulgences including  marzipan, cream and chocolate. Needless to say, I’m very tempted to buy the book. However, I did take note of one recipe that caught my eye as it uses rye bread instead of flour.

As some of you may know, I make rye sourdough bread on a regular basis, so this Scandinavian chocolate cake seemed particularly apt.

The rye bread and blackcurrant cake was surprisingly light given the ingredients used. It was also nicely chewy. All by itself it would be a good cake, but the added jam, cream and chocolate changed it into a bit of a marvel. The cream cooled the slight heat coming from the chillies in the jam and the chocolate added a little sophistication.

Rich, indulgent but also quite simple, this was even better than I was hoping. Now I know I can use rye bread to make cakes, I’ll no longer have those annoying bits of stale bread left at the end of the loaf.

This Scandinavian chocolate cake, otherwise known as Brødtort, comes from a region in Denmark where the tradition of cake tables almost puts our Clandestine Cake Club to shame. Invitees are expected to try a bit of every cake at a buffet consisting of at least twenty cakes. I think my record is about nine at one of our CCC gatherings and that was quite tough going.

Other Recipes That Use Stale Bread

Thanks for visiting Tin and Thyme. If you make this Scandinavian chocolate cake, I’d love to hear about it in the comments below. And do please rate the recipe. Have you any top tips? Do share photos on social media too and use the hashtag #tinandthyme, so I can spot them.

If you’d like more recipes for layer cakes, follow the link and you’ll find I have quite a lot of them. All delicious, of course.

Adapted from Scandinavian Baking by Trine Hahnemann.Please note: calories and other nutritional information are per serving. They’re approximate and will depend on exact ingredients used.

I am sending this Scandinavian chocolate cake off to a brand new challenge created by Janice over at Farmersgirl Kitchen. #RecipeClippings gives us the incentive to trawl through our piles of magazine clippings, torn out recipes and hand written notes and then actually use them. A grand idea I reckon.

In the same vein, I am sending my rye bread and blackcurrant cake off to Bookmarked Recipes with Jac of Tinned Tomatoes.

The recipe called for hazelnuts, but when I went to find them in my cupboard I came across a packet of Brazil nuts which were past their sell by date. So I thought I’d better use those instead. This makes it eligible for the No Waste Food Challenge over at Elizabeth’s Kitchen Diary.