Yes autumn is here again and it’s brambling season. If you’re wondering what to do with all those black fruits you’ve gathered, this double blackberry chocolate galette might do the trick. It’s a rustic blackberry tart with a hidden layer of chocolate blackberry jam to give added depth and sweetness. 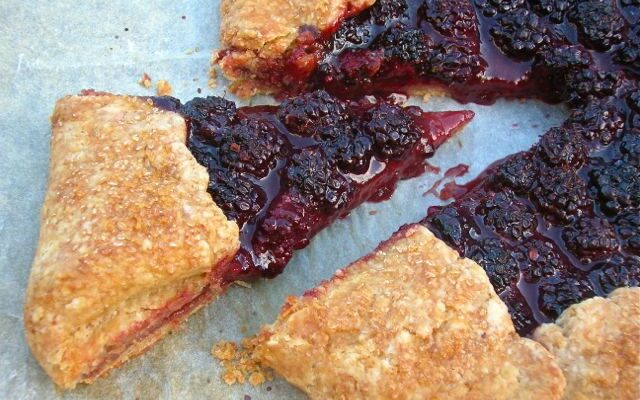 When Kate announced that blackberries were to be the special ingredient for this month’s We Should Cocoa, I knew exactly what I wanted to make. Ever since my first rustic gooseberry galette earlier in the year, I was dying to try one with blackberries. But it wasn’t going to be any old galette, it was a double blackberry chocolate galette.

Blackberries are one of autumn’s delights, but picking them was a harder job than I was expecting. We had a solid week of rain here in Cornwall and this had a rather detrimental effect on our lovely brambles. Most of the fruit was mouldy or spoiled in some way. However, with a bit of diligence along with the usual scratches and stained hands, I managed to pick a good punnet full.

The double blackberry chocolate galette was everything I was hoping for. I’ve said it before and I’ll say it again, this pastry recipe is the best ever; its easy to handle and it produces a beautifully flaky buttery crust. The chocolate blackberry jam added depth of flavour and sweetness and the blackberries gave their distinctive late summer essence.

If you don’t have any chocolate blackberry jam to hand and I can quite see why you wouldn’t, just use regular blackberry jam instead. Or you could try my ab fab hedgerow jelly.

Thanks for visiting Tin and Thyme. If you make this double blackberry chocolate galette, I’d love to hear about it in the comments below. Have you any top tips? Do share photos on social media too and use the hashtag #tinandthyme, so I can spot them.

If you’d like more blackberry recipes, follow the link and you’ll find I have quite a lot of them. All delicious, of course.

Can use blackberry jam or hedgerow jelly instead of chocolate blackberry jam.Please note: calories are per serving. They’re approximate and will depend on exact ingredients used.