If you’ve got gooseberries and you’re not quite sure what to do with them, try making this gooseberry galette. It’s a simple rustic French fruit tart with the filling only partially covered by the delicious yet easy to make flaky pastry. If you haven’t got any gooseberries, go out and get some.

Since we had to give up our allotment, we’ve not grown our own gooseberries. Luckily my mother still does.When she gave me some recently, I immediately thought of a comforting crumble. The weather had taken a turn for the worse and it was cold and wet. However, by the time I got around to actually using them, the weather had improved. Although a gooseberry fool or other such dessert might have been more appropriate, I had “baked gooseberry something” on my mind. A sudden flash of inspiration and gooseberry galette it was – both baked and summery.

Truth be told, pastry has not been on my list of favourite bakes. I like to eat it, but have rarely had much joy in making it. Until, that is, I tried one of Lindsey Bareham’s recipes from Pasties. My first attempt was a great success: rhubarb pasty pie. I’ve been using a half wholemeal spelt, half white flour variation on her pastry ever since. The key ingredient here is yoghurt: it produces a light buttery flaky pastry which is just fabulous. It’s really easy to handle and it’s revolutionised my pastry making. I’ve never made a galette before, let alone a gooseberry galette. How crazy, it’s so easy. This rustic French style of baking is very appealing, it’s simple, frugal and no pie dishes needed. The galette is exceptionally good, with a perfect balance of sweetness, tartness and satisfying flaky pastry. And no soggy bottom either. It’s delicious warm, served with some blueberry cream and raspberries. It’s nearly as good on its own cold, two days later. 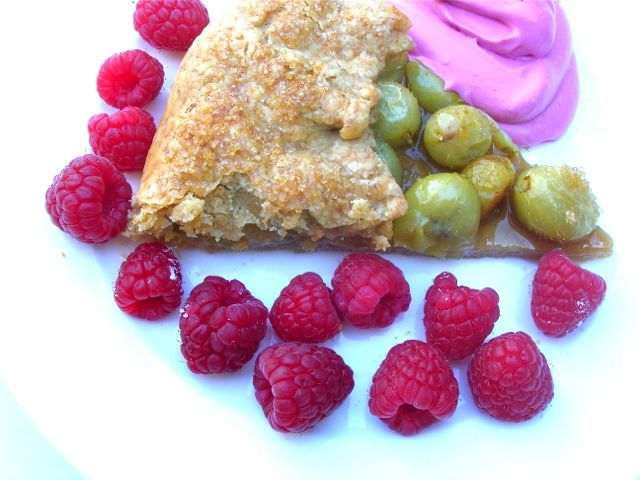 Thanks for visiting Tin and Thyme. If you make this easy peasy gooseberry galette, I’d love to hear about it in the comments below or via social media. Do share photos on your preferred social media site and use the hashtag #tinandthyme, so I can spot them.

Best served warm, but it's pretty good served cold the day after baking too. Please note: calories and other nutritional information are per serving. They're approximate and will depend on exact ingredients used.