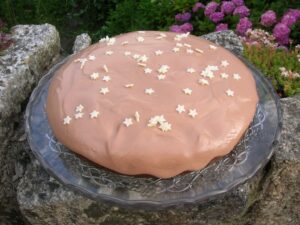 Now why is it I’m so useless at taking note of recipes? I pride myself on never following a recipe and using it for inspiration or guidance only, but sometimes it’s quite a useful technique! The moment I saw Dom’s golden cake post I was almost gagging to make it. Trust Dom to come up with such an inspirational recipe. I’ve made plenty of beetroot cakes in the past, but never thought of using golden beets and yet we’ve been growing them for years. It was the golden colour that most appealed, but also the word itself – something to do with summer and the warm glow of hopes and aspirations – a culinary El Dorado.

Anyway, I lifted a couple of large golden beets from our plot and the first chance I got I put them on to cook. First mistake! If I’d looked at the recipe beforehand rather than relying on a very vague memory, I would have realised they were meant to be grated raw – hey ho, never mind. The second mistake I was much more bothered by. Dom’s recipe called for light muscovado sugar. Trawling through my cupboards, I realised I’d run out of it, so before I thought about the implications, I’d bunged in a load of dark muscovado sugar; no hope for a beautiful golden cake now. Why I didn’t use caster sugar instead I’ve no idea. I made a few intentional alterations: I omitted the vanilla extract as I wanted the lemon and beetroot flavours to shine through – golden beets are very sweet and have a  lovely flavour, I also used a little less sugar.

Anyway, this is what I ended up doing:

The house smelt really sweet and fragrant as this was cooking, with lemon and syrupy notes very much to the fore. We couldn’t wait for the icing to set properly, so greedily cut into it at the first opportunity. The golden colour was not entirely obscured and it still looked quite appealing. The cake rose well, although CT thought it had the consistency and some of the flavour of treacle pudding. Really it was like a lemony ginger cake without the ginger: quite light, moist and rather moreish.

But, oh such a tragedy, we couldn’t eat it quite fast enough. The weather being very warm and very humid, the cake went mouldy after only three days and we had to throw nearly half of it in the compost bin. Our worms don’t know how lucky they are.
Previous Post: « Coconut and Chocolate Vegan Flapjacks
Next Post: Tropical Brownies – Random Recipes 7 »