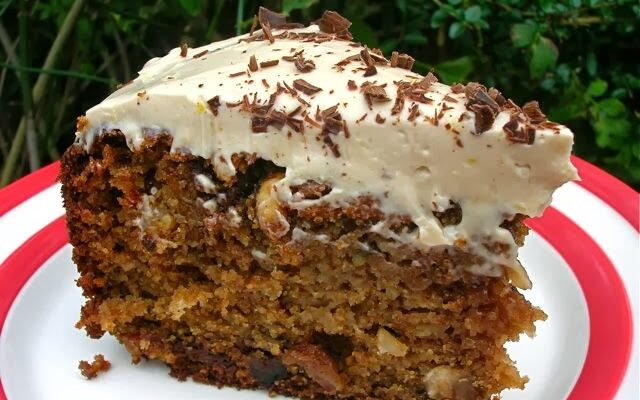 A friend recently passed on a recipe for me to chocolatify. He reckoned that not only was this cake unusual, but it was also possibly the best cake he’d ever made. I was intrigued by the inclusion of Jerusalem artichokes and immediately took up the challenge.

At this time of year we have no problem getting hold of this particular root vegetable as it grows, almost of its own volition, down on our plot. I adore the taste of artichokes, but also find them a real pain to clean. So I don’t use them as often as I probably should. The cake includes roasted hazelnuts and I could see how well these would work with artichokes which have nutty notes of their own.

Initially, I’d planned to follow the recipe as written. Well apart from adding chocolate and using my usual half wholemeal, half white flour mix of course. But things went a little awry.  I didn’t have any raisins for a start, so had to substitute sultanas.

But mostly, I didn’t read the recipe carefully enough and ended up using a different method entirely. I also didn’t think I needed to peel the artichokes, although I scrubbed them well and cut out the bad bits. I was right, they don’t need peeling.

If I didn’t know better, I wouldn’t have known there were Jerusalem artichokes in the cake. But wow, I’m sure they added to the overall nuttiness. This cake was truly delicious: chewy, crunchy, moist and abundant.

The Alunga buttons left chocolatey hotspots throughout the cake which contributed nicely to the overall richness of taste. The sharp lemony cream cheese icing offset the sugar, although, thankfully, it wasn’t too sweet at all. It was actually quite similar to a carrot cake, only, dare I say it, much nicer.

How can I put this politely? I didn’t notice any, er, unfortunate consequences to eating the Jerusalem artichokes in this way, so it got a double thumbs up from us.

Some time before Christmas, I was sent three lovely bags of Cacao Barry chocolate drops. This is a new range of high quality couverture chocolate they’ve introduced. It uses a new fermentation method which purportedly gives a more intense taste.

The Q-Fermentation TM method uses natural ferments found in the plants and soil of the plantation which is said to give a purer bean with a fuller flavour. I’m looking forward to trying the chocolate out in a few sophisticated recipes where the flavour can shine through.

However, I decided as there were so many lovely ingredients in this cake it would be good to use a special chocolate too. From previous experience, I’ve found that milk chocolate chips tend to work better in this type of cake as a very dark chocolate can sometimes take over rather than enhancing.

The 41% Alunga milk chocolate seemed ideal. With its strong caramel notes and high cocoa content, I found it hard to stop dipping into the bag as I went along. I’m looking forward to trying the Inaya 65% and Ocoa 70% dark chocolates in due course.

For more recipes and ideas on how to use vegetables in sweet bakes, head over to my Sweet Vegetable Bakes board on Pinterest.

Thanks for visiting Tin and Thyme. If you make this Jerusalem artichoke cake, I’d love to hear about it in the comments below. Do share photos on social media too and use the hashtag #tinandthyme, so I can spot them.

If you’d like to see some more large cake recipes, follow the link and you’ll find I have quite a lot of them. All delicious, of course.

This Jerusalem artichoke cake is my offering for this month’s We Should Cocoa. Linzi over at Lancashire Food is kindly hosting and has asked us to combine an ingredient we have never used with chocolate before. I was initially going to send over the paprika and cocoa roasted cauliflower that I made earlier in the month. But in the end I decided this was a more unusual and worthy entry. I can honestly say, that I have never until now, eaten Jerusalem artichokes and chocolate together.

I’m also using this vegetable cake as my entry to Family Foodies over at Bangers & Mash. Hidden Goodies is the theme this month. These artichokes are very well hidden and I suspect few would ever guess what the cake contained. This challenge is co-hosted by Lou at Eat Your Veg.

Not only is this Jerusalem artichoke cake made from scratch, but some of it is grown from scratch too. So I’m sending it off to Javelin Warrior for his Made with Love Mondays.