Vegan wholemeal scones are not only delicious, but they’re also healthy. These ones are rich with fibre, vitamins, minerals and also protein. They’re quick and easy to make and you’ll find some hot tips on how to make them rise well. 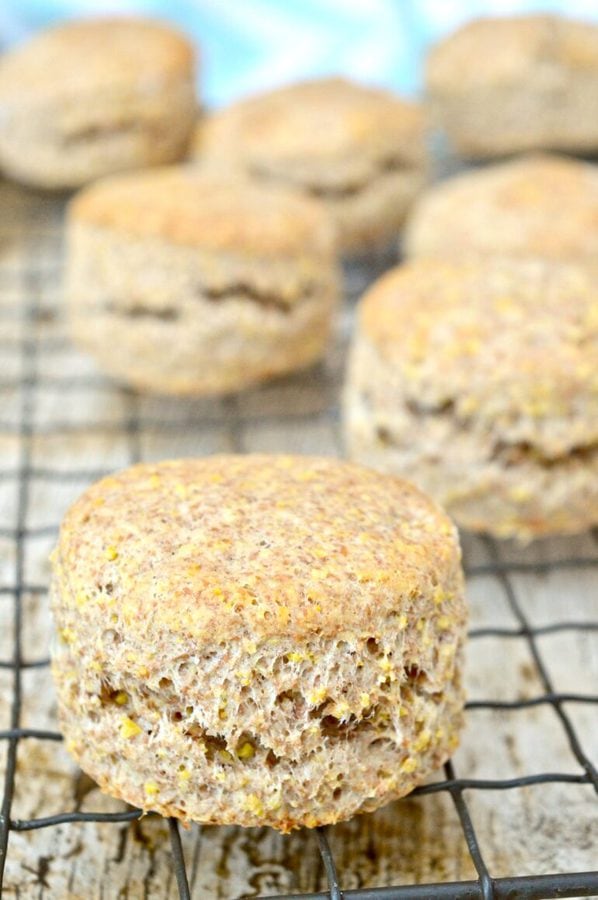 Scones are a British institution and any afternoon tea worth its salt will feature them. You’ll find plenty of scone recipes on Tin and Thyme, but I’ve recently realised there isn’t one for vegan scones. Until now.

Scones can be a real indulgence, especially if you load then with jam and cream – ahem! These vegan wholemeal scones, however, err on the healthier side of scone land. They’re made with wholemeal spelt flour and a little protein powder to make up for the protein you’d normally get in dairy milk.

Having said all that we generally do top them with jam and cream. But the jam is homemade and the cream is whipped coconut cream. I tend to add a little rose syrup to the coconut cream to add floral notes and a bit of sweetness. It works really well.

Wholemeal flour is inherently a lot healthier than white flour which is heavily processed and where all the bran has been removed. It’s a great source of much needed fibre, is rich in vitamins B1, B3, and B5 as well as riboflavin and folate. It also has more iron, calcium and protein than plain flour. But good as it is, spelt flour is even better. Head over to my post to find out why.

Not only is wholemeal flour far more nutritious than plain flour, however, but it tastes really good too. It has a nutty quality and a firm texture. Like many foods, it may take a bit of getting used to, but it’s well worth making its acquaintance.

In order to add in a little extra protein, I’ve substituted some of the flour with lupin flakes. If you look closely, you can see the yellow lupin bits. Lupin not only contains more protein than quinoa, but it also has more dietary fibre than oats, more antioxidants than berries, more potassium than bananas and more iron than kale. Yes, it’s another superfood. But hands off Granny’s lupins. They should stay firmly in the border.

But as lupin flakes probably aren’t that easy to get hold of, you can use pea flour or quinoa flour instead. They both have their fair share of health benefit claims.

It’s rare for me to use eggs when I bake scones. One of the main benefits to a scone is that you don’t need eggs. So for these dairy-free scones, it’s really just a simple process of substituting butter for a vegan fat and the milk with a plant based milk.

However, I’m not a fan of vegan margarines. I prefer the ingredients for my home cooked recipes to be as unprocessed as possible. So I use coconut oil in these vegan wholemeal scones. Coconut oil is one of the healthier oils and it also has an affinity with baking. I’ve heard olive oil works well in scones too, but I haven’t tried it – yet!

When coconut oil is at room temperature, it’s usually hard. This means it’s best to rub the oil into the flour with your fingers as you normally would with butter. However, when it’s hot, as it is here in the UK at the moment, coconut oil liquefies. So if this is the case when you make these vegan wholemeal scones, just mix the oil in at the same time as you add the milk to the dry ingredients.

There’s a slight bitterness that often comes with protein powders, so you might want to offset it with a little sugar. Occasionally I do, but mostly I don’t. If you’re going to load your scones with jam or something else sweet, there’s really no need.

The last thing I do, which is a bit unusual, is to sour the milk before using it. This really helps with the rise. Just add a teaspoon of lemon juice or vinegar to the milk five minutes before you add it to the flour.

The key to baking scones is a hot oven. Make sure yours is up to temperature before you put the scones in. They only need between twelve to fifteen minutes to bake, which is one of the reasons they make an ideal impromptu treat when you have unexpected visitors.

These vegan wholemeal scones should be nicely risen, moist rather than dry and not at all heavy. You know you’ve got a good one when there’s a natural crack in the middle. This means there’s no need for cutting, just pull the two halves apart with your hands.

You may notice two very different scone photos in this post. The ones with the coveted crack aren’t as burnished as the others as I forgot to brush them with milk before baking. With the burnished beauties, on the other hand, I misjudged the amount of liquid and they were a bit drier and not as well risen as they should have been. These baking mishaps happen to the best of us. Do as I say, not as I do.

Scones are at their best served warm, soon after baking. They don’t keep very well, so eat them the same day you bake them. This isn’t difficult. Having said that, they do freeze well. So wait for them to cool properly, then pack into a freezer bag and freeze. They’ll last for three months.

How Do You Get Vegan Wholemeal Scones to Rise?

There’s no doubt about it, wholemeal scones will never be as light and fluffy as scones made with white flour. The bran in wholemeal flour inhibits the rise to some extent. But a good whole grain scone should not be heavy. Here are some top tips on how to get your scones to rise.

The trouble with whipped coconut cream is the colour is less than appealing. It has a grey cast, which I have to say, isn’t a patch on good old Cornish clotted cream. There I’ve said it.

The flavour is obviously different too. I really like all things coconut, so I’m happy to go with this as a substitute for dairy when I make vegan wholemeal scones. But it still takes a bit of getting used to. That aside, whipped coconut cream makes a very good accompaniment to scones and vegans won’t feel left out.

As I said earlier, I add a dash of rose syrup to my whipped coconut cream. But you could just leave it plain. Alternatively you can add a little sifted icing sugar for sweetness and / or some vanilla extract.

On the day I made these particular dairy-free whole wheat scones, it was very hot. I got up early so I could bake them whilst it was still relatively cool. But when it came to whipping the coconut cream, things didn’t go too well. Coconut cream likes to be cool. Alas, by the time we were ready for afternoon tea, it was positively steamy and when I whipped that cream, it just didn’t want to peak properly. But although it wasn’t as stiff as I’d ideally like it, it still tasted good.

If you fancy a go at making vegan clotted cream, Rebecca at Gluterama has perfected the recipe, though I have to say I haven’t tried it myself.

International Scone Week was started way back when (in 2011) by Celia over at Fig Jam & Lime Cordial. I know I keep saying it, but where does the time go? Tandy from Lavender and Lime later took up the mantle. Last year I joined in with these spelt strawberry shortcakes. You can see all of the scones that were made last year on Tandy’s sidebar and this year’s batch will be replacing them on 17th August.

This year #ISW2020 runs from 10th to 16th August. If you’d like to join in, you’ve still got time. Scones really don’t take very long to make.

It’s also Afternoon Tea Week this week (10th to 16th August), so I’m pretty well set up for that too. But if you haven’t made scones recently, this is another good excuse for doing so.

Thanks for visiting Tin and Thyme. If you try this recipe for dairy-free wholemeal scones, I’d love to hear about it in the comments below. And do please rate it. Have you any top tips? Do share photos on social media too and use the hashtag #tinandthyme, so I can spot them.

If you’d like more scone recipes, follow the link and you’ll find I have quite a lot of them. All delicious, of course.

You can leave out the protein powder and replace with wholemeal flour, but it’s good for some additional nutrition as you won’t be getting the protein and other nutrients from dairy milk. Both pea flour, quinoa flour are good as well as lupin flakes.There’s a slight bitterness that comes in with the protein powders, so you might want to offset it with a little sugar. It’s entirely optional and will depend on what you’re planning to serve it with.You can substitute 2 ½ tsp of baking powder for the cream of tartar and bicarbonate of soda.These scones don’t rise as well as ordinary scones due to the bran in the wholemeal flour, but they’re not at all heavy and definitely delicious.Best eaten on the day they are made. Or can be frozen once cooled.Please note: calories are per serving. They’re approximate and will depend on exact ingredients used.

I’m sharing this recipe for vegan wholemeal scones with Lost in Food for #CookBlogShare.