Light and crunchy brown sugar aquafaba meringues are a complete delight. Eat on their own, top them with whipped coconut cream and berries, add to an Eton Mess style dessert or crumble over ice cream. They’re a vegan dream. 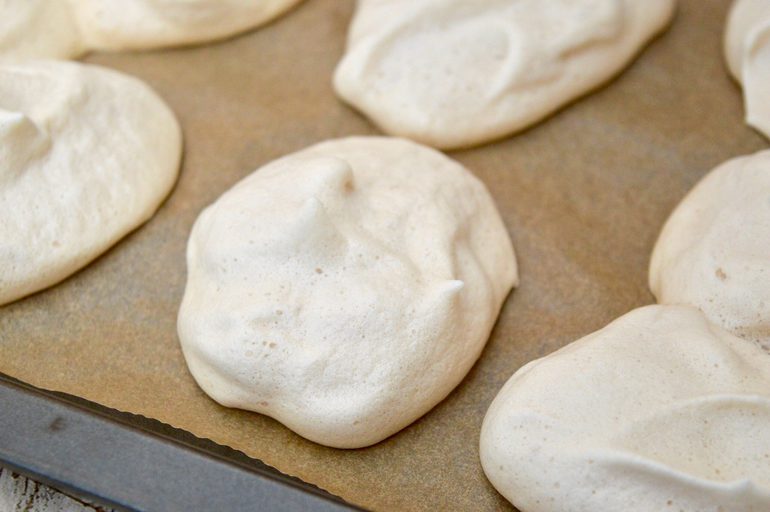 If you’ve not tried making aquafaba meringues before I urge you to give them a try. They’re a revelation. If you have made them before, why not try my brown sugar version?

Aquafaba is the water that chickpeas, beans and other pulses are cooked in. The clue’s in the name: aqua means water in latin and faba mean bean. It’s really useful stuff so it’s a shame to throw it away. Just drain it from a tin of pulses or reserve the water from your own cooked ones.

You can use it as a general egg substitute in vegan baking and it’s meant to make a good vegan mayonnaise too. I haven’t tried it though. Now I’ve perfected my own super quick and easy recipe for vegan mayonnaise, I’m reluctant to move on.

In recipes that use one egg, substitute three tablespoons (45 ml) aquafaba. For an egg white, use two tablespoons (30 ml).

If you want to use aquafaba for baking, it’s best to use unsalted water. Not only is the salted water salty, but it generally has a more powerful flavour that you don’t really want in your bakes. For these brown sugar aquafaba meringues, chickpea water is best.

Why Vegans Should Avoid White Sugar

As a whole food blogger, I’ve only ever used white sugar on rare occasions. But I was really quite shocked to discover recently that white sugar is often refined using animal bones. I suspect I’m not the only person who’s completely unaware of this.

The bones are charred and ground up into something called bone char. Bone char is then used to filter sugar to make it whiter.

This seems to be more of an issue in the US than it does here in the UK. Icing sugar is the main culprit here. If you want to avoid bone char sugars, however, it’s best to avoid any pure white sugars. You’ll be safe with certified organic sugars, muscovado sugar and anything from Billingtons.

I’ve heard that white sugar is the most reliable sugar to use when it comes to making meringues. But for the reasons given above, I’ve never tried it. I’ve used golden caster sugar, but these brown sugar aquafaba meringues are my favourite. They have a lovely caramel flavour and a good tan colour – well it is summer.

I use the aquafaba from one 400g tin of chickpeas, which usually comes out at around 180ml. But you may need to adjust quantities depending on how much you have available.

If you have a stand mixer, you’ll find making these brown sugar aquafaba meringues a complete breeze. The machine will do all the work for you. I wouldn’t recommend whisking by hand for this recipe though, as you’d need to be incredibly fit. This is because it takes ten minutes at high speed in a stand mixer to achieve a good stiff meringue.

For a rustic look dollop heaped tablespoonfuls of the raw meringue onto the baking tray. If you’re after something a bit fancier, you’ll need to get the piping bag out.

Some people say you can’t taste the difference between vegan meringues and ordinary ones, but that’s not the case in my experience. They do have a certain beany flavour, but you quickly get used to it. They’re still light, crisp and delicious.

It’s taken me a while to master aquafaba meringues. They are more fragile and temperamental to make than egg white meringues. I’ve had no problems whipping up the aquafaba into stiff peaks. I’ve even held the bowl over my head to make sure the mixture is stiff enough. But when the meringues started to cook, they collapsed and I was left with a sticky unusable goo.

So here are my top tips on how to make successful brown sugar aquafaba meringues.

Thanks for visiting Tin and Thyme. If you make these vegan brown sugar aquafaba meringues, I’d love to hear about it in the comments below. Do share photos on social media too and use the hashtag #tinandthyme, so I can spot them.

They should last for 2-3 days if stored in a cool place in an air tight tin.Please note: calories and other nutritional information are per serving. They're approximate and will depend on exact ingredients used.

I’m sharing this recipe for vegan brown sugar aquafaba meringues with Recipes Made Easy for #CookBlogShare.