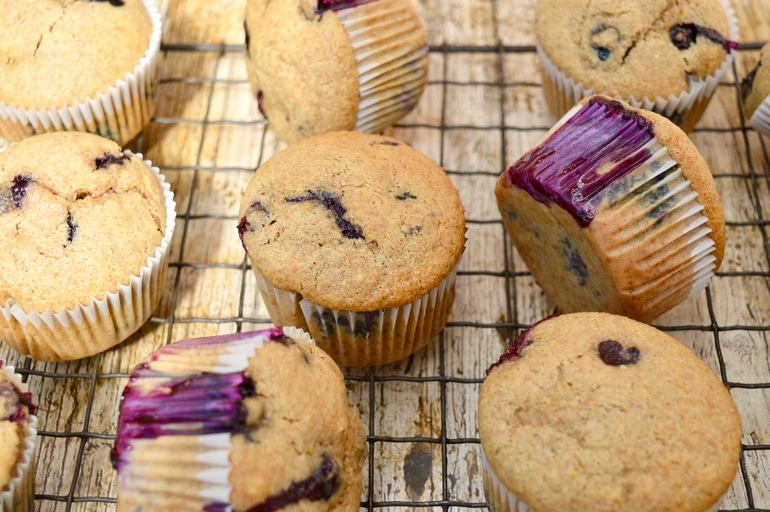 A super easy one bowl recipe for vegan blueberry muffins flavoured with lemon. They’re quick to make too and can be ready in under thirty minutes. Made with wholemeal spelt flour, they’re not only light and delicious, but healthier too.

Blueberry muffins are an American classic. They’ve crossed the pond and are now a firm favourite here in the UK. There’s a good reason for that. As the muffins cook, the blueberries explode, releasing their wonderful purple juice and going all jammy. But they’re not only delicious, they’re also incredibly easy to make. This vegan whole wheat version is even easier.

When I spotted some cut price blueberries the other day, I thought I’d better get some. So I did and hotfooted it back to the kitchen to make a batch of these vegan blueberry muffins.

You don’t need a whole load of ingredients to make these easy vegan blueberry muffins. The recipe is incredibly simple. It’s mostly, flour, sugar, milk, oil and blueberries. I’ve used lemon to flavour the muffins rather than the more traditional vanilla. But you could easily swap this over if you prefer.

Place the flour and other dry ingredients into a large bowl. You can either sieve them in, or give them a good whisk once they’re in the bowl. Either method will combine the ingredients as well as remove any lumps.

Make a well in the centre and pour in the oil and soured milk. Read on to find out how to turn plant milk into sour milk.

Using a large metal or wooden spoon, gently mix in the dry ingredients from the inside out until everything is just incorporated. Don’t forget to stir in those blueberries. It’s important that you don’t over mix muffins as this could make them tough rather than soft and light.

Divide the mixture between twelve muffin cases and bake for about twenty minutes. Don’t worry if the cases lose their shape when you spoon in the blueberry muffin batter. You can see from the above photos that mine did precisely that. But when you take them out of the oven, they’re all just as they should be. 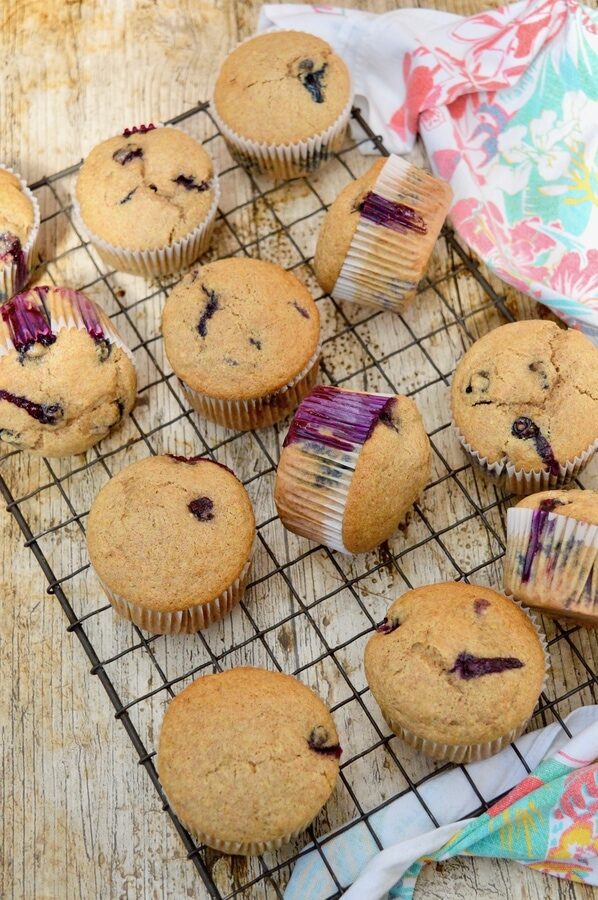 Like many bakes, these vegan blueberry muffins are particularly delicious to eat when they’re not long out of the oven and still warm.

It doesn’t matter how simple the bake, there’s usually at least one question that pops into your head. I’ve done my best to answer some of them here. But please do ask me in the comments below if you have others.

As a whole food blogger who’s particular concerned about eating nutritionally dense foods, I mostly use wholemeal flour in my bakes. For this vegan blueberry muffin recipe I’ve used wholemeal spelt. But don’t let that put you off. You can use ordinary whole wheat flour instead.

You might want to sieve out the largest pieces of bran though. This is because bran inhibits the rise in bakes, so they won’t be as light and spongy. You can find out why I like baking with wholemeal spelt in this post, what is spelt flour and how to use it.

Yes, you absolutely can. The Free From Fairy’s gluten free flour works perfectly for this type of bake. It’s a fabulous wholegrain blend with no rice or gums. You can see the results in this recipe for vegan peanut butter banana muffins.

What’s the Best Milk to Use?

You can use whatever plant milk you like best or happen to have in the house. I’ve found that soy milk is a particularly good one for baking as it best mimics the properties of cow’s milk. If you’re not vegan or catering for vegans, you can always plump for the dairy option.

In order to make classic blueberry muffins, you need sour milk or buttermilk. So before you do anything else, you’ll need to sour the milk. This is a simple step, but a helpful one. Just add some lemon juice to whatever milk you’re using. Give it a good stir and leave it for five minutes to curdle.

These vegan blueberry muffins keep well for two to three days. Just store them in an air tight container. But you’ll be hard pressed to keep them that long. 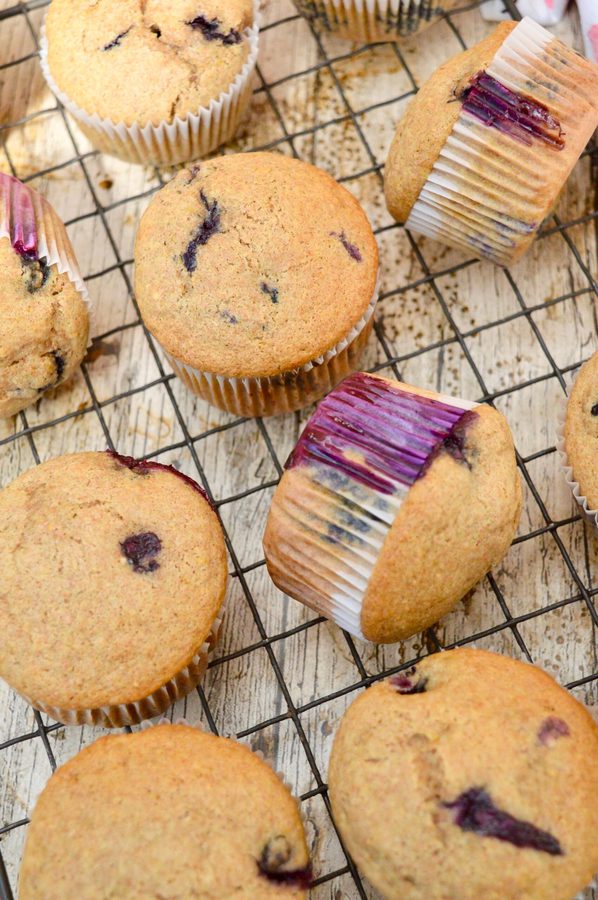 If there are too many to eat in just a few days, or you need to make them in advance, you can always freeze them. Just place in a freezer bag and pop into the freezer. Make sure they don’t get buried at the back and forgotten about. They’re best eaten within two months.

For more vegan cake recipes, head over to my vegan bakes board on Pinterest.

Thanks for visiting Tin and Thyme. If you make these vegan blueberry muffins with or without the spelt flour, I’d love to hear about it in the comments below. Do share photos on social media too and use the hashtag #tinandthyme, so I can spot them. 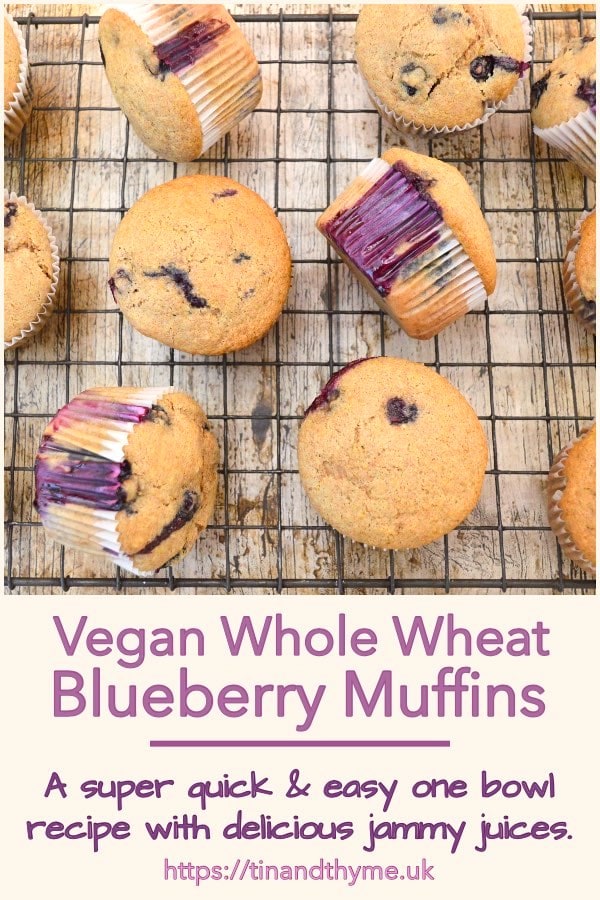 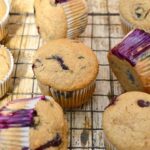 You can swap vanilla extract for the lemon zest if you prefer. Use 1 tsp and add with the other wet ingredients. Please note: calories and other nutritional information are per serving. They're approximate and will depend on exact ingredients used.

I’m sharing this recipe for vegan blueberry muffins with Lost in Food for #CookBlogShare.