I know it’s summer, but sometimes nothing will do but brownies. These blackcurrant brownies fit right in as blackcurrants are at their best in July. They’re sweet, rich and fudgy and permeated most delightfully by tart flavoursome blackcurrants. They’re also super easy to make. 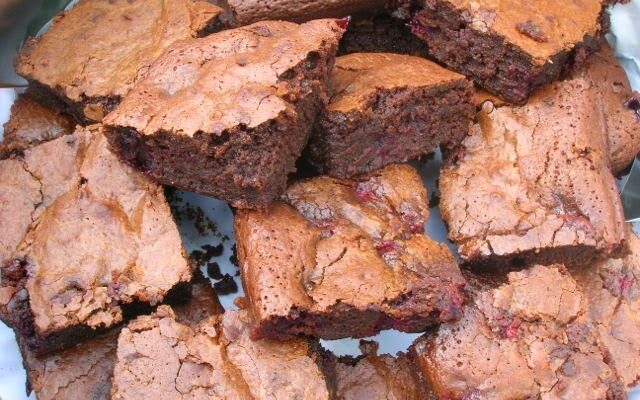 On Saturday, a friend kindly let me loose in her overflowing fruit cage and I picked four pounds of blackcurrants. I wasn’t entirely sure what I was going to do with them, but yesterday I used two pounds to make eight pots of glorious blackcurrant and chilli jam. That left two pounds, most of which has gone into making cassis, but I felt a bit of baking was called for too.

Hunting around on Eat Your Books delivered blackcurrant beach brownies from Dom over at Belleau Kitchen. I was no stranger to these brownies as they had featured in the blackcurrant round-up of We Should Cocoa a couple of years ago. The concept was appealing and I’d always meant to make some, but they had somehow slipped my mind.

Yesterday seemed like a good time to try them out, especially as they will fit in very nicely with a future project I’m planning. Some blackcurrant sauce was called for too – for said future project.

If I need to make brownies in a hurry, my go to recipe these days is for chocolate fudge brownies from Charlotte Pike’s wonderful book Easy Baking in The Hungry Student series. I first made these for an event last summer where they proved to be extremely popular. Then, last week, I made some for my birthday party.

This week, I’ve omitted the coffee, used some different sugars and added blackcurrants. I also always use wholemeal flour or wholemeal spelt which I feel gives me a few brownie points (haha). The method I use is my favourite one pot wonder.

The brownies are a little more delicate than the normal ones, with a finer texture. They are utterly delicious, with the tart berries giving bursts of flavour and somewhat offsetting the sugar high. They will do very nicely for what I am planning.

If you happen to make my easy homemade cassis, you can use the leftover blackcurrants for these blackcurrant brownies. You’ll get an extra kick and even more flavour.

If you’re looking for other blackcurrant recipe ideas, you will find plenty here on Tin and Thyme. You will find even more if you head to my Blackcurrant Pinterest board. But I also have a post for All The Blackcurrant Recipes You Will Ever Need, which might become your go to. It features some of my recipes and a whole heap from other food bloggers.

Thanks for visiting Tin and Thyme. If you make these blackcurrant brownies, I’d love to hear about it in the comments below. And do please rate the recipe. Have you any top tips? Do share photos on social media too and use the hashtag #tinandthyme, so I can spot them.

If you’d like more brownie recipes, follow the link and you’ll find I have quite a lot of them. All delicious, of course.

Previous Post: « Red Gooseberry Cakes – A Tart Taste of Summer
Next Post: Mastering the Art of Sushi with Yo! Sushi »