Got too many blackcurrants? Don’t know what to do with them? Try this easy homemade cassis. There’s no faffing about with this recipe and you only need three ingredients. Let time do the work for you and turn those blackcurrants into a smooth and delicious blackcurrant liqueur. 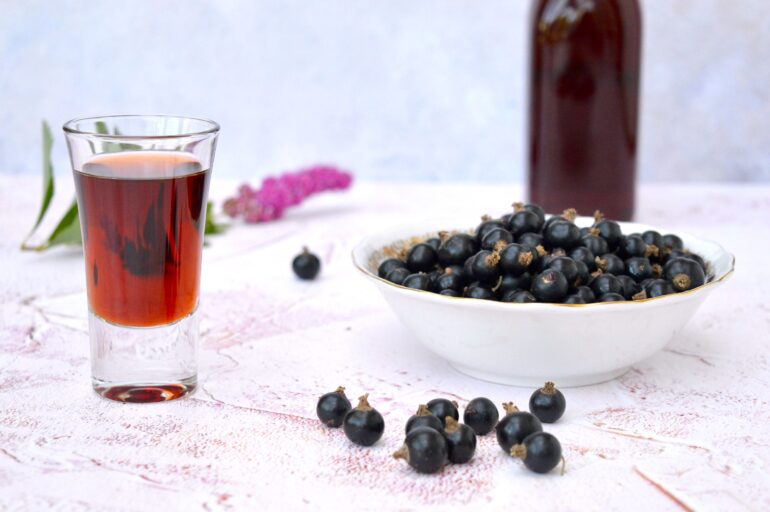 Over the years, I’ve made countless homemade liqueurs. Rhubarb schnapps and this easy homemade cassis are my favourites, though sloe gin is also hard to beat.

Cassis is the French name for blackcurrant. Back in the mists of time, the French imported blackcurrant bushes from England and started adding some of the juice to their cheap wine to make it more palatable. In 1841 a liqueur maker and distiller, Auguste-Denis Lagoute of Dijon, started manufacturing crème de cassis on a commercial scale. Blackcurrants are crushed and soaked in alcohol and sugar is added at a later stage.

It’s a dark red sweet liqueur with a smooth texture and fruity aromas. In 2015, Crème de Cassis de Bourgogne achieved protected geographical status (PGI). This guarantees that any bottle with this label is produced in Burgundy and uses the blackcurrant variety, Noir de Bourgogne. It is, however, very easy to make your own. And in my humble opinion, my homemade version is better. Phouf!

My easy homemade cassis is not the authentic recipe for creme de cassis, but it has all of the flavour and isn’t nearly as sweet. It’s also incredibly simple to make.

I’ve seen recipes where you have to crush every berry by hand or boil up a syrup or soak the berries first and any number of other variations. This all seem needlessly complicated and unnecessary. There’s no faffing about with my method, however. All you need to do is chuck everything into a jar and leave it. It works a treat.

There are recipes that use gin, rum, brandy or wine. But these all have quite distinctive flavours of their own. I use vodka which has a more neutral taste. This allows the blackcurrant flavour to shine through and create a cleaner, fresher fruit liqueur.

Blackcurrants contain significant amounts of Vitamin C, antioxidants and anthocyanins. They are one of Britain’s top superfoods, after all. So although I can’t exactly claim that my easy homemade cassis is good for you, a moderate amount does have some health benefits.

Fresh seasonal blackcurrants are wonderful but if you can’t get hold of these, frozen ones will still produce a decent blackcurrant liqueur.

You don’t need nearly as much sugar for homemade cassis as you do for sloe gin, for example. This is because sloes are incredibly bitter. Blackcurrants may be a bit on the tart side, but you can eat them raw and many people find them pleasant. You would not want to eat a sloe raw, it will pucker your mouth up almost instantly. So sloes need lots of sugar to counteract that bitterness.

I don’t like my drinks to be overly sweet, so you might want to taste your easy homemade cassis after the first week of steeping. If you feel it’s not sweet enough, just add a bit more sugar.

How to Make Easy Homemade Cassis

As I’ve already mentioned, all you really need to do is to weigh out your three ingredients and bung them into a large clean jar. Leave for a few months. Job done. There are, however a few things to take note of.

How Do You Drink Cassis?

Crème de cassis is a a critical component of many well known cocktails. Kir is the most famous of course, but there’s also el diablo, Arnaud martini and cassis spritz to name but a few. Once you’ve made your own easy homemade cassis, why not create your very own cocktail?

Traditionally creme de cassis was used in France to perk up an inferior white wine. Kir is now consumed as a classic aperitif, but it’s also popular as a summer drink. Just add a slug of cassis to your wine and it will instantly taste better and have a fruity kick to it. For a Kir Royale, add 10 ml to a glass of champagne or other sparkling white wine. If you add cassis to red wine, the resulting cocktail is known as a Cardinal.

Kir was popularised by the French Resistance war hero Felix Kir (1876-1968). He was the mayor of Dijon in Burgundy and regularly served the drink to visiting dignitaries.

I prefer to drink my cassis neat as an apéritif or pre-dinner liqueur. Oddly, my friends all seem happy to go along with this. It’s strong stuff, so you only need a small shot glass, but ooh la la, it’s good.

Alternatively, it’s also delicious served over ice as an after-dinner drink or digestif.

Thanks for visiting Tin and Thyme. If you try this easy homemade cassis, I’d love to hear about it in the comments below. Have you any top tips? Do share photos on social media and use the hashtag #tinandthyme, so I can spot them.

If you've got more blackcurrants than you know what to do with, this is a fabulous recipe to try. There’s no faffing about and you only need three ingredients. Time is all that’s needed to turn those blackcurrants into a smooth and delicious blackcurrant liqueur.
Prep Time15 mins
Cook Time0 mins
Macerating Time90 d
Total Time90 d 15 mins
Course: Drinks
Cuisine: French
Keyword: blackcurrants, cassis, liqueur, vodka
Servings: 14 50ml glasses
Calories: 109kcal
Author: Choclette @ Tin and Thyme

Makes 2 x 350ml bottles. If you want to make larger quantities, just double, triple or quadruple the quantities given in this recipe and use a bigger jar.Don’t worry about taking off any stems that might still be attached to the blackcurrants. They’re not poisonous and won’t alter the flavour.Once bottled, the liqueur will last almost indefinitely, though it tastes better in it’s first year.Don’t throw the blackcurrants away. You can use them in many blackcurrant recipes or just eat them as they are with ice cream. They’re particularly good in these blackcurrant brownies, though they’d also work well in this chocolate blackcurrant buckle recipe.Pour into pretty bottles. They make ideal gifts for friends and family.Please note: calories and other nutritional information are per serving. They’re approximate and will depend on exact ingredients used.

I’m sharing this recipe for easy homemade cassis with Gluterama for #CookBlogShare.