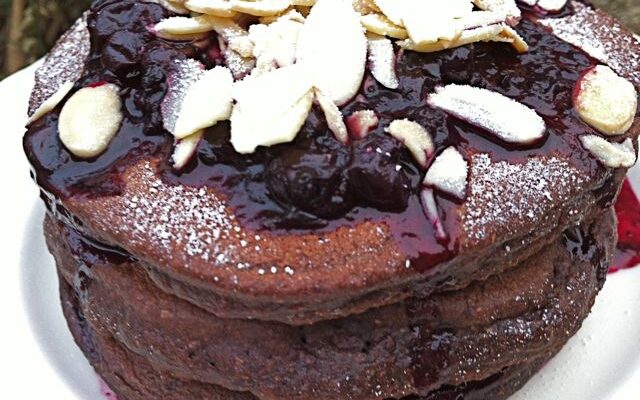 I love Random Recipes and think Dom of Belleau Kitchen is a genius for coming up with the idea. I’ve been in from the beginning, so it always grieves me when I run out of time and don’t manage to make the challenge. Last month was such a one and I was beginning to panic that this month would turn out the same. But no, I was determined not to miss it again.

Dom gave us quite a bit of freedom with this challenge and allowed us to pick our own book. This is a highly unusual event. I went for my Valentine’s gift from CT (itself a highly unusual occurrence); a chocolate book I have long been lusting after, Chococo chocolate cookbook by Claire Burnet. I closed my eyes and opened the book on a random page, somewhat trepidatiously. You just never quite know what you might be letting yourself in for.

Sigh of relief, which then turned to one of excitment: chocolate pancakes platter. I have long wanted to make chocolate pancakes, but somehow I’ve never actually managed it. Fortuitously, I also had a tub of blackcurrants which were in desperate need of using up.

My mother’s freezer, not so fortuitously and very upsettingly, packed up unexpectedly. She ended up having to throw most of the food away. By the time we received some of her currants, they had been out of the freezer some time. So instead of making the cherry compote denoted in the recipe, I made blackcurrant, rose and mint compote instead. Why wouldn’t you?

I decided at the last minute to experiment with using hazelnut oil rather than the stated melted butter. It was a completely pointless exercise as the hazelnut flavour could not be detected above the blackcurrants. So I’ve stated butter for the recipe. If you’re going to make these pancakes with a less powerful topping, however, hazelnut oil is lovely.

Although I’ve suggested golden caster sugar in the recipe, I usually make these chocolate pancakes with either vanilla or cardamom sugar. Both work well.

These chocolate pancakes with blackcurrant compote should come with a warning. They are definitely a dessert and should not be eaten for breakfast. The pancakes are delicious and the blackcurrants complement them perfectly.

Instead of making several modestly sized pancakes, I made six large ones. The resulting pancake stacks were thus enormous and I struggled to finish mine. The mixture does, however, make twelve smaller pancakes, enough for four people. This is much better portion size. But we are not known for our restraint in such matters and felt we deserved it. After all we’d spent the day hacking back down at the plot.

This blackcurrant compote is lovely in its own right. Serve it over ice cream for another delicious dessert. Alternatively spoon some over your winter breakfast porridge. It will perk it up no end.

Blackcurrants and rose make for a lovely combination. I use it quite a lot as I have in this blackcurrant compote. My homemade rose syrup is ideal for this purpose. But if you don’t have any, just use a little extra sugar and a teaspoon of rose water instead.

I’ve included mint liqueur as one of the compote ingredients, but it’s entirely optional. If you like the idea of mint, but don’t want the alcohol, add a sprig of mint when you cook the blackcurrants. Or just follow the instructions in my blackcurrant fool with fresh mint.

You can use either fresh blackcurrants or frozen ones for this recipe. Just thaw frozen ones before you make it.

Chocolate Pancakes with Other Toppings

I now make these chocolate pancakes on a regular basis. I’ll serve them with blackcurrant compote when blackcurrants are in season. But they work well with all sorts of other toppings.

Thanks for visiting Tin and Thyme. If you make these chocolate pancakes with blackcurrant compote, I’d love to hear about it in the comments below. And do please rate the recipe. Have you any top tips? Do share photos on social media too and use the hashtag #tinandthyme, so I can spot them.

If you’d like more blackcurrant recipes, follow the link and you’ll find I have quite a lot of them. All delicious, of course.

You may want a little more or a little less sugar in your blackcurrants. It will depend on how sweet they are and how sweet you like them.Please note: calories and other nutritional information are per serving. They’re approximate and will depend on serving size and exact ingredients used.

Kate of Turquoise Lemons has given us preserves for her monthly No Food Waste Challenge. So I used blackcurrants preserved from the summer as well as my homemade mint vodka and rose syrup. They all needed using up.

Teatime Treats hosted alternately by What Kate Baked and Lavender and Lovage is puddings this month. Well I can tell you these chocolate pancakes with blackcurrant compote make a very nice pudding indeed.

As the pancakes are American style ones, I’m entering them into Bloggers Around the World hosted by Chris of Cooking Around the World. The country of choice this month is the USA.

Previous Post: « Ginger and Lime Cake with Lime Curd and Whipped Ganache for Cornwall CCC and We Should Cocoa #30
Next Post: Chocolate Key Lime Pie »