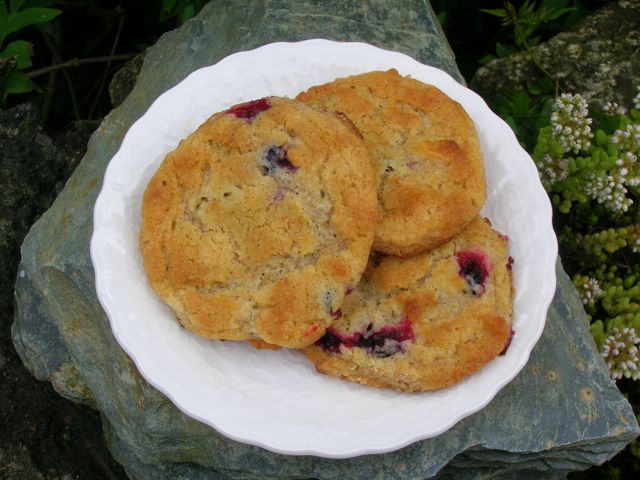 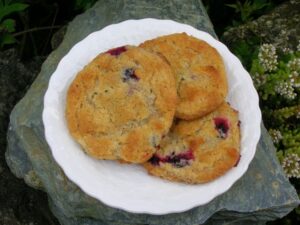 When I set blackcurrants as this month’s We Should Cocoa challenge, I had vague thoughts of making my mother’s Blackcurrant Buckle recipe. Neither of us have actually made this in more years than I care to remember, but it has lived on in my memory as a good one. A bit of adaptation in my usual way to include chocolate would have been a cinch. However, although I remembered to raid my mother’s blackcurrant bushes on my last visit there, I sadly forgot to raid her pile of recipe scraps for the neglected Buckle. All was by no means lost however, I did have something else in mind – two in fact.

One of the many surprise presents I received from CT on my birthday was a copy of Biscuits by Miranda Gore Brown, she of Great British Bake Off fame (1st series). This now sits in pride of place on my bedside table and forms my bedtime reading, giving me plenty of sweet things to dream about. When I first looked at the book, it just happened to open randomly on a recipe for blackcurrant and white chocolate biscuits – well really, how could I ignore that sign? The other idea I had was for ice-cream and frankly, that could wait for another day. 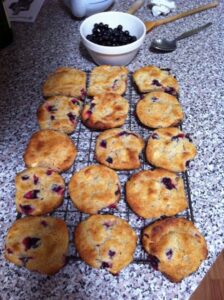 I only made half the quantity given and just as well. Miranda’s recipe was for 16 biscuits. All I can say is, I’d be delighted to be invited around to her house for tea; my half amount produced 15 large biscuits – I can only assume hers are absolutely ginormous. Other than rounding up the odd measures that halving the recipe entailed, I reduced the sugar slightly and used my usual half wholemeal flour mix.

These were crisp on the outside, soft and chewy on the inside and were what I would term cookies rather than biscuits. They spread more than I anticipated, so most of them merged into each other, which was a bit annoying. Oh, but they tasted good! Sweet biscuits with little caramely bites of white chocolate which contrasted with bursts of tart juicy berries giving a great taste sensation.

So, although these were made primarily for We Should Cocoa, they happen to fulfil the criteria for several other blog challenges. So I am also entering them into:

Alpha Bakes – a monthly challenge run by The More Than Occasional Baker and Caroline Makes. The randomly generated number this month comes from Caroline and is W for White chocolate.

Made with Love Mondays – a weekly challenge set by Javelin Warrior’s Cookin w/Luv to make something completely from scratch.

Bookmarked Recipes – a monthly challenge run by Jac of Tinned Tomatoes, but originally created by Ruth’s Kitchen Experiments to make something you’ve bookmarked from a book, magazine or online.