If you like cinnamon, then snickerdoodles are the biscuits for you. Isn’t the name fabulous? For those not in the know, they’re a popular American classic: buttery balls of dough that are rolled in cinnamon sugar just before baking. These spelt snickerdoodles are made with wholemeal spelt flour and produce a delightful soft and chewy cookie. 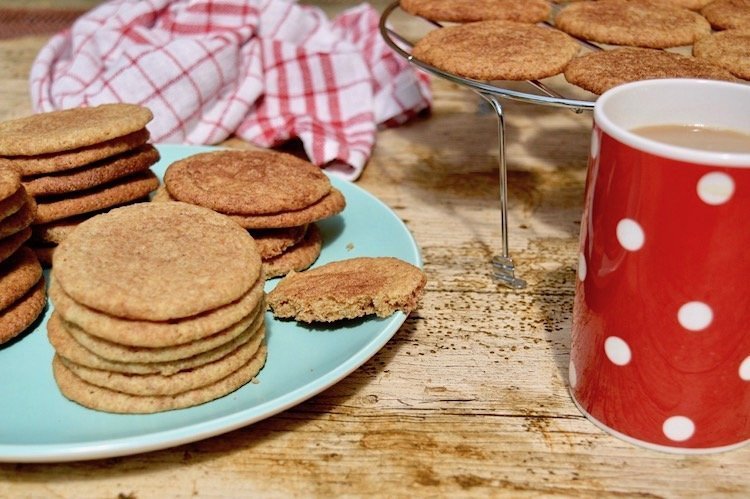 I’ve been a cinnamon fiend ever since I can remember. Sugar and spice and all things nice, that’s what cinnamon makes me think of. If I had to pick just one spice, cinnamon would probably be the one. I just hope it never comes to that, because a life without chilli, ginger, cumin, cardamom and turmeric seems rather a bleak one.

Cinnamon comes from the inner bark of the Cinnamomum verum tree and has been prized for its medicinal qualities for thousands of years. It’s high in both fibre and manganese, which means it’s meant to be particularly good for colon health. It’s also said to lower blood sugar levels, making it a favoured spice amongst diabetics.

People love this spice because of its sweet and warming qualities which work well in both sweet and savoury recipes. I find it lends itself particularly well to biscuits. You can see several biscuit recipes I’ve made below. It seems I have a particular fondness for cinnamon shortbread. Oh well, don’t fight it.

Try to use a good quality cinnamon and make sure it hasn’t been hanging around too long. It makes all the difference. Ceylon cinnamon, also known as true cinnamon, is the one to go for if you can find it.

These spelt snickerdoodles are made with wholemeal spelt flour and they’re incredibly easy to make. You just need to cream butter and sugar, add an egg & stir in the dry ingredients. Then comes the best part, which is rolling the dough into balls then rolling those balls in cinnamon sugar. Ooh that scent. Mind you, the smell emanating from the oven whilst the spelt snickerdoodles are baking is hard to beat.

Place well apart on the baking tray as the cinnamon cookies will spread. Although, it’s best to press them down flat with the bottom of a glass or cup before baking.

They’re at their best warm, when they’re not long out of the oven. When cool, they’re pretty cool, however.

These spelt snickerdoodles have a slight sugary cinnamon crackle to the tops, but should be soft and chewy inside.

Cream of tartar is an integral ingredient in snickerdoodles. It gives a slight tang to the biscuits and helps to make them soft. However, if you don’t have any cream of tartar, you can substitute this and the bicarbonate of soda with two teaspoons of baking powder. I won’t tell if you don’t.

If you prefer your biscuits to have a bit of a snap, just cook these spelt snickerdoodles an extra 2-3 minutes. They will then be crisp around the edges, but still chewy in the middle. On the whole, I favour a good dunking biscuit that has a bit of a crunch to it. Having said that, these cinnamon cookies are perfect just as they are meant to be, which means soft and chewy.

Which type of biscuit or cookie do you prefer?

Thanks for visiting Tin and Thyme. If you make these soft and chewy cinnamon spelt snickerdoodles, I’d love to hear about it in the comments below. And do please rate the recipe. Have you any top tips? Do share photos on social media too and use the hashtag #tinandthyme, so I can spot them.

You can substitute 2 tsp of baking powder for the cream of tarter and bicarbonate of soda mix if you need to.If you like a crisper cookie, bake for two to three minutes longer.

I’m sharing these wholemeal spelt cinnamon cookies with Jo’s Kitchen Larder for #BakingCrumbs, Casa Costello for #BakeOfTheWeek and Recipes Made Easy for #CookBlogShare.