Love shortbread, but looking for something a bit different? This chocolate and cinnamon shortbread will do the trick. It has that familiar tender texture, but with a cocoa hit and sweet spicy notes from the cinnamon. One square is never enough. 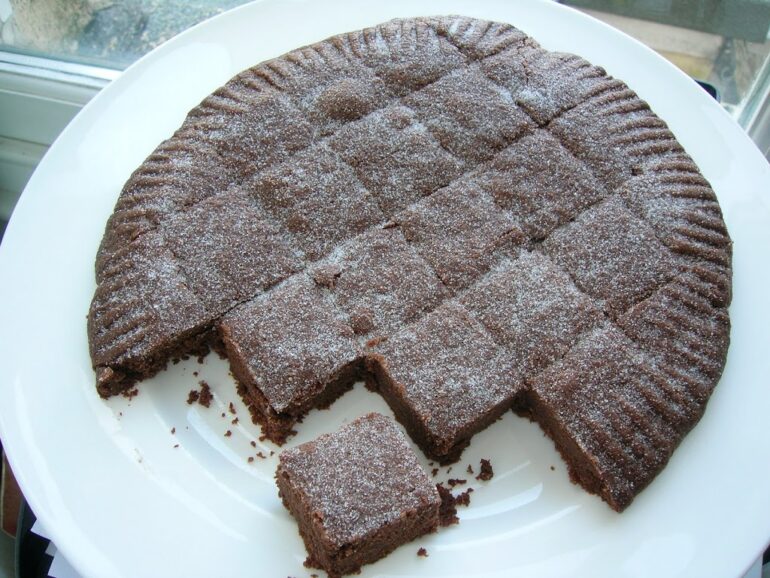 I adore shortbread in all its forms. It’s easy to make, not too sweet and has a lovely flavour and texture. Just because I’ve stated above that shortbread has a tender crumb, that doesn’t mean it can’t also be crisp. Roll it out thinly, cut into individual shapes and bake for a little longer than you might otherwise do and you have crisp. Still deliciously short, but crisp. You can find links to some of my many shortbread recipes further down the post.

Shortbread is a traditional Scottish bake. It was said to be a favourite of Mary Queen of Scots, though it was a little different in those days and contained caraway seeds. In its purist form, it’s made with only three ingredients: one part sugar, two parts butter and three parts flour.

As already mentioned shortbread has a lovely tender and slightly crumbly texture and is big on buttery flavour. Some prefer to add a little rice flour or semolina to the mix to give a bit more bite to the biscuits.

Despite the Scots claiming shortbread as their own, every baker worth their salt bakes shortbread. It’s a stalwart of the Women’s Institute (WI) throughout the UK. I’ve never managed to make shortbread as delicious as the oh-so-excellent biscuits you find in WI markets which literally just melt in the mouth. Nonetheless, many have told me over the years that my shortbread is delicious. So I’ll stick to my flavoured version and leave the traditional stuff to the experts.

Head over to Farmersgirl Kitchen in order to find out how to make traditional Scottish Shortbread.

Despite enjoying melt in the mouth shortbread, CT likes his biscuits to be a bit more robust. So I substitute some of the flour for fine semolina. I also added cinnamon, but not too much, cocoa powder and a pinch of salt. Well you can’t have chocolate and cinnamon shortbread without adding something extra. And well salt just enhances the flavours and marries well with chocolate in any case.

The beauty of this recipe is that you need very little equipment. It’s quick to make and you end up with little washing up. You bake the shortbread in a large round, which you shape free-form. The crucial thing to remember is to lightly mark out the shapes in which you wish to cut your shortbread as soon as it comes out of the oven. If you cut it whilst it’s still warm, it’s likely to fall into pieces, so be patient and wait for it to cool.

I’ve cut my chocolate and cinnamon shortbread into squares, but it could just as well be fingers or triangles. The choice is yours.

We took this particular batch of shortbread to friends the same day I baked it. Everyone loved it. It had a proper shortbread texture with the added bonus of a cocoa hit. The sweet and spicy notes of cinnamon rounded the flavour off most beautifully.

Thanks for visiting Tin and Thyme. If you make this broccoli cauliflower cheese or the lime buttered corn, I’d love to hear about it in the comments below. And do please rate it. Have you any top tips? Do share photos on social media too and use the hashtag #tinandthyme, so I can spot them.

If you’d like even more biscuit recipes, follow the link and you’ll find I have quite a lot of them. All delicious, of course.

Chocolate and Cinnamon Shortbread – The Recipe

I’m sharing this recipe for easy homemade pizza from scratch with Recipes Made Easy for #CookBlogShare.