This double pear green smoothie bowl is a firm favourite. In fact everyone who’s tried it has been impressed and wanted the recipe. It’s rich, filling and delicious. It’s also packed full of nutrients and keeps you going for hours. That’s at least two of your five-a-day done and dusted by breakfast.

Since I spotted Ceri’s recipe for pear, almond & kale smoothie over at Natural Kitchen Adventures, I’ve been making my own tweaked vegan version on a regular basis. It’s a complete delight and sustained me through most of Veganuary. This double pear green smoothie bowl was an iteration I came up with on the very last day and it’s even more fabulous made this way.

The basic smoothie is almond milk, pear, kale, yoghurt and almond butter. I substituted vegan almond yoghurt for Greek yoghurt, added chia seeds and an avocado pear. Why have only one type of pear when you can have two? I also made ginger an integral part of it. It provides a bit of additional flavour, plus some welcome zing and heat. The green element comes from kale as well as the avocado.

This double pear green smoothie bowl recipe makes a really thick smoothie. It’s rich and filling and best eaten with a spoon, rather than drunk from a vessel. If you pour it into a bowl, it becomes something so much more than a smoothie in a glass. You’re almost compelled to sit down and sup it in a contemplative manner. This is so much better for the digestion than gulping on the run.

I finished this particular double pear green smoothie bowl off with a sprinkling of my vegan honey & almond granola. This is not really necessary, but does add a little extra interest. It’s entirely optional and so far, I’ve only done it to impress guests.

You will need a good power blender. Pears can be quite grainy and both ginger and kale are rather fibrous. I use my Froothie Optimum Vac2 Air Vacuum Blender,* which does a fabulous job of blitzing the raw ingredients into a velvety green smoothie bowl. It does it in about 40 seconds.

No problem. You can leave out the avocado and still have a delicious and nutritious green smoothie bowl. The mixture won’t be quite as thick or unctuous, but it will still be pleasing. If you don’t use the avocado and you’re not after a leisurely breakfast, you can drink the pear, almond and kale smoothie from a glass.

If you’re not vegan, you can easily substitute natural dairy yoghurt for the almond version. I’ve been known to do this on a few occasions. When push comes to shove, however, I prefer to use vegan almond yoghurt. I like the idea of having three almond elements in this super tasty almond smoothie.

For me the pear and almond butter are essential elements of this green smoothie bowl and should not be substituted. However, the ginger can be left out if you don’t have any to hand. It won’t have the slightly fiery notes that ginger gives, but it will still be delicious.

I often substitute the kale for spinach in this double pear & almond green smoothie bowl. It just depends what I have in the house at the time of making it. The chia seeds, or sometimes linseeds, I add for a digestive aid as well as a bit of extra protein. They won’t, however, make any difference to the flavour and will only slightly alter the consistency.

Thanks for visiting Tin and Thyme. If you make this green smoothie bowl with pear, avocado, almonds and kale, I’d love to hear about it in the comments below or via social media. Do share photos on your preferred social media site and use the hashtag #tinandthyme, so I can spot them. For more delicious and nutritious recipes, follow me on Twitter, Facebook, Instagram or Pinterest. 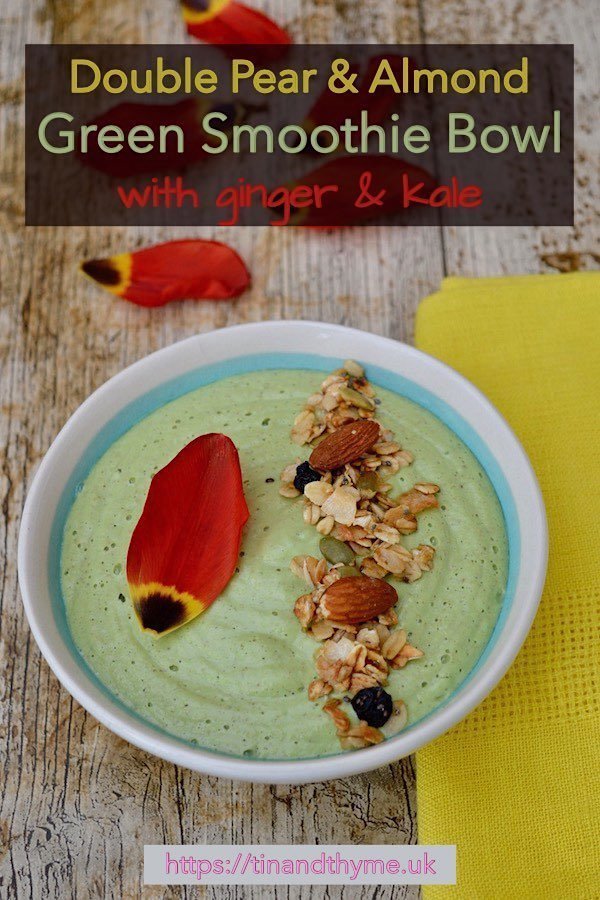 Swap the kale for spinach or other greens of your choice if you prefer. Please note: calories and other nutritional information are per serving. They're approximate and will depend on serving size and exact ingredients used.