Rock cakes are a traditional British bake and they are one of the easiest to make. These sultana and prune rock cakes are a variation of the classic bake, but you can use whatever dried fruit you like. You’ll also find tips on how to make fresh apple rock cakes. 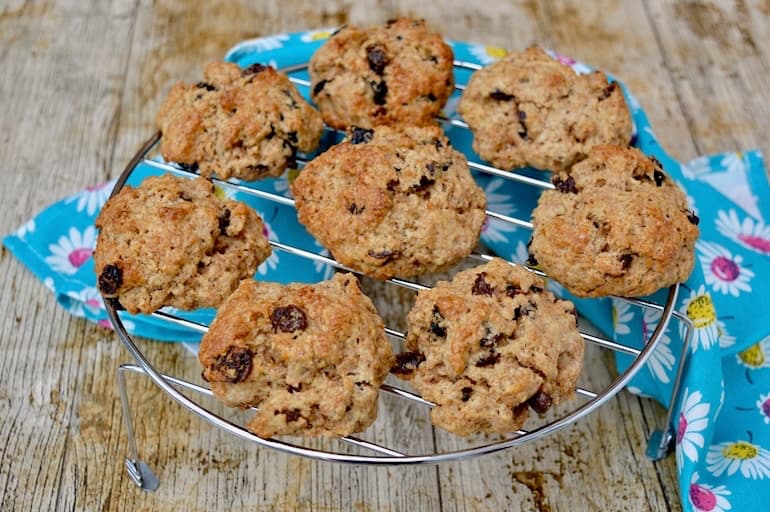 Craggy lumps of stiff cake dough are mounded onto a baking tray and bunged in the oven. The result are these scrumptious little morsels that look a bit like rocks. If you’ve never had them before, don’t worry, they are not rock-like in texture. Although they’re firm on the outside, they are in fact soft and crumbly on the inside. And utterly delicious too.

These sultana and prune rock cakes are a variation of the classic bake, but you can use whatever dried fruit you like. You’ll also find tips on how to make fresh apple rock cakes.

My mother loves her puddings. When I was growing up, crumbles, steamed puddings and custards were nothing out of the ordinary. She was in fact a veritable Queen of Puddings.

She didn’t really go in for cakes though. I always had a birthday cake. And there was Christmas cake of course, but with one notable exception, there was little else. The exception was rock cakes. She always added a mixture of currants, mixed peel and dates to hers and I used to love them.

Following in my mother’s footsteps, I’ve been making rock cakes ever since I first started baking. My basic recipe is exactly the same as the one my mother used to use, but I tend to add different fruit to ring the changes. Sometimes I even add bits of chocolate. Apple rock cakes are one of my favourites, but this time I went for sultana and prune rock cakes.

As I’ve already mentioned, these cakes are both simple and quick to make. It’s just a case of rubbing butter into the dry ingredients, stirring in the sugar and fruit, then adding the wet ingredients.

Rather than use plain milk, try using sour milk instead. If you don’t have any sour milk, you can make an easy cheat’s version. Head over to my recipe for Cornish hevva cake to find out how. Or you can use kefir. I often have more kefir than I know what to do with and it works brilliantly in baking. So that’s what I used to make these prune rock cakes.

Another plus point to these near traditional British bakes is that they keep really well. You can store them in a sealed container for up to a week and they still taste good.

Surprisingly, for such humble cakes, my rock cakes get rave reviews from all who try them.

Prunes are incredibly good for you and no, I don’s just mean they help to keep you regular. They contain a significant amount of boron and potassium, which helps to stabilise and possibly even build bone density.

This makes prunes super helpful to post-menopausal women and people like me, who have osteoarthritis in the family. Apparently astronauts are encouraged to take 5 a day when they’re in space to keep their bones strong. Prunes also have anti-inflammatory properties, so they’re doubly good for those with arthritis.

On top of their high fibre content and bone strengthening abilities, prunes also contain calcium and iron, making them particularly good for vegans. Having said all that, beware. Please don’t go overboard as too many consumed in one sitting can be positively harmful. The recommendation is to take 5-6 a day.

When apples are in season, do try and bake some apple rock cakes. They are really good. Follow the recipe for prune rock cakes, but use fresh apple instead of prunes and replace the mixed spice with one teaspoon of ground cinnamon. Peel, core and finely chop one cooking apple and stir this into the dry ingredients before adding the wet ones.

Apple rock cakes have become such a favourite with one particular friend that she requests them whenever the opportunity arises. I first took a plate of them to her when she ran the local independent bookshop in Liskeard.

It’s a marvellous place which somehow manages to keep going whilst many shops are closing around it. The staff always give excellent service and are friendly and knowledgeable. It may be small, but CT hasn’t found a book yet that they haven’t been able to order for him and he orders some rather obscure items.

Thanks for visiting Tin and Thyme. If you make these sultana and prune rock cakes, I’d love to hear about it in the comments below. And do please rate it. Have you any top tips? Do share photos on your preferred social media site and use the hashtag #tinandthyme, so I can spot them.

If you’d like to see some more recipes for uniced buns and small cakes, follow the link and you’ll find I have quite a lot of them. All delicious, of course.

Handle the dough as little as you can get away with. You’ll have a softer, flakier result the less you mix it.Try not to have too much of the dried fruit poking out of the dough before baking as it’s likely to burn in the oven.Keep well in a sealed container for up to a week.To make apple rock cakes, use fresh apple instead of prunes and replace the mixed spice with one teaspoon of ground cinnamon. Peel, core and finely chop one cooking apple and stir this into the dry ingredients before adding the wet ones.Please note: calories and other nutritional information are per serving. They’re approximate and will depend on serving size and exact ingredients used.

I’m sharing my sultana and prune rock cakes with Jo’s Kitchen Larder for #BakingCrumbs, with JibberJabberUK for #LoveCake, with Mummy Mishaps for #BakeOfTheWeek and Easy Peasy Foodie for #CookBlogShare.