Classic Belgian waffles are a real treat, but they’re hard to make at home without a dedicated waffle maker. The Volcano Waffle Maker, available exclusively from Andrew James, is an innovative British design, engineered to cook perfect Belgian style waffles with no fuss and no mess. Here’s a recipe for delectable spelt waffles with rose raspberry sauce.

I’ve made spelt waffles plenty of times before, but in a silicone mould where the waffles are baked in the oven. I’ve never used or owned a “proper” waffle maker before, so I don’t actually know that the Volcano Waffle Maker is any better than others on the market. BUT, I was impressed.

In a short space of time I’d made six large spelt waffles that were crisp on the outside and light and fluffy on the inside. They turned out of the waffle maker almost perfectly, with very little mess involved. They looked like the real deal. CT was even more impressed to find he had fresh spelt waffles awaiting him when he got home. 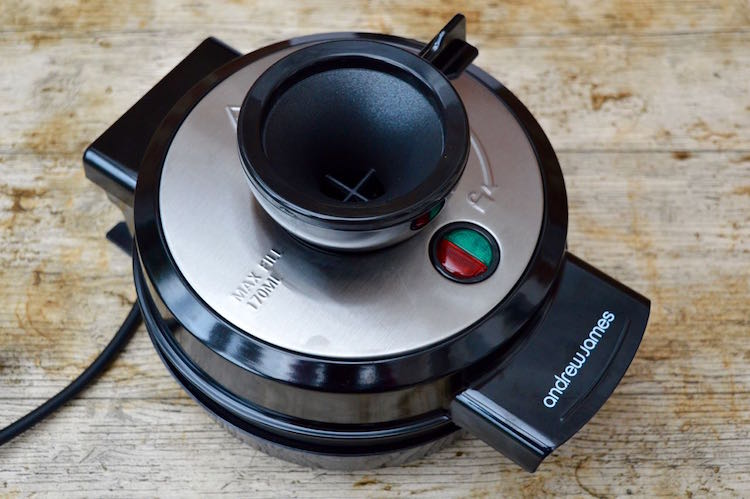 This British designed appliance won the 2017 IHA Global Innovation Award for its unique design and it’s only available to buy at Andrew James. Currently selling at £29.99 with a normal RRP of £40.99.

You can see why the Volcano Waffle Maker was thus named. Like a volcano, it has sloping sides which enables the batter to access every nook and cranny. Pour the batter through the crater (or funnel if you prefer).

It cooks from the bottom up and you can watch the batter rise and bubble through the funnel. I kept expecting it to flow over the top like lava, but luckily the crater/funnel is tall enough to prevent this. The seal is very secure and stops the batter from leaking out of the sides. It’s a bit of theatre in the kitchen and seems like an ideal waffle maker for families as it’s both practical and fun. 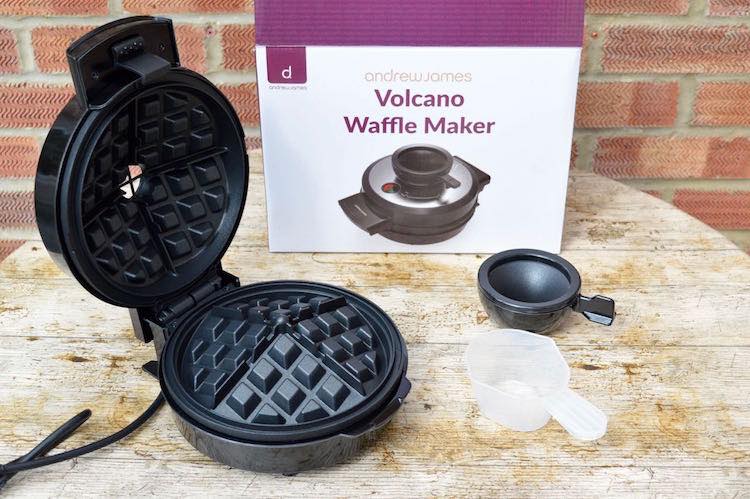 What Andrew James says about the Volcano Waffle Maker

What I have to say about the Volcano Waffle Maker 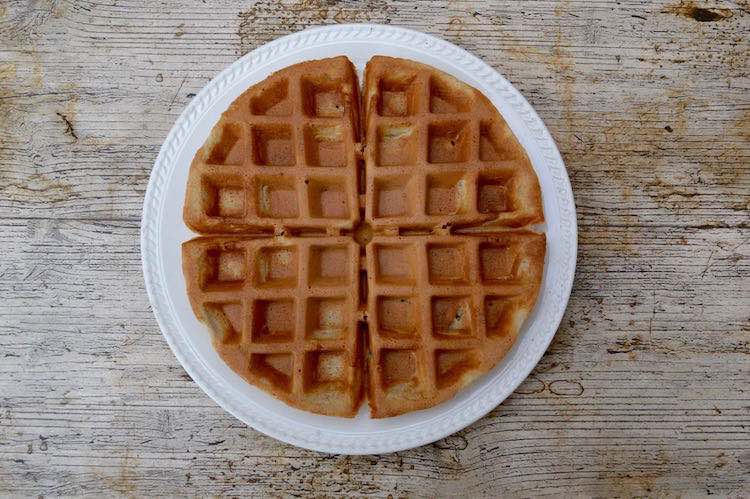 I based my waffle batter on the recipe for basic waffle mix found in the accompanying booklet. However, I wasn’t going to use white flour, oh no! Even though I’d never used a waffle maker before, I was convinced my trusty wholemeal spelt flour would do the trick and it did. The waffles rose well and had the classic prerequisites of being crisp on the outside and light and fluffy on the inside.

I went my own way with the flavours, creating a batter with notes of lemon and cardamom rather than vanilla; I knew these would set off the rose raspberry sauce nicely. In addition, I changed the quantities slightly, used duck eggs instead of hens, butter instead of vegetable oil and a little golden caster sugar.

It just so happened that I used my Optimum Vac2 Air Vacuum Blender to whizz up both the sauce and the batter. I know you won’t be in the least surprised, for it does make the whole process even easier.

The rose raspberry sauce is divine. It’s both sweet and sharp with just a hint of rose coming through to complement the raspberry flavour.

Rose and raspberries are a brilliant combination that I’ve used many times. These raspberry rose friands are particularly good. You might also like this raspberry, rose white chocolate cake or these raspberry & rose curd cupcakes. I reached into the fridge for my oh so easy to make rose syrup; if you aren’t able to make any, rose water or Holy Lama’s rose oil drops should work fine. 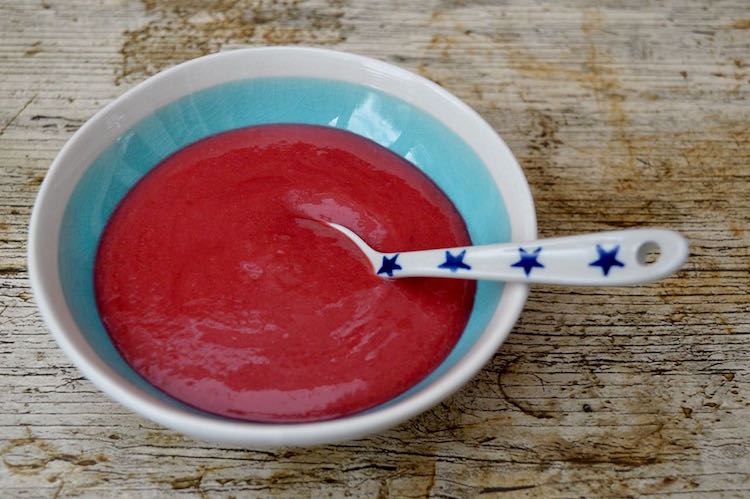 We ate these spelt waffles with rose raspberry sauce for supper, but they’d be even better as a special weekend breakfast or brunch. We found that you can’t go wrong with extra raspberries and a spoonful of whipped cream.

Wondering What To Do With Your Excess Waffles?

The recipe creates six large waffles, which is great for an occasion, but too many for just the two of us. However, once cooked they can be frozen in readiness for the next time we fancy waffles. We might have just done that already. Time to get that waffle maker out again. Simply allow the frozen spelt waffles to thaw, then place them in the toaster for a minute or two and they’re as good as new.’

Thanks for visiting Tin and Thyme. If you make my spelt waffles with rose raspberry sauce, I’d love to hear about it in the comments below. Do share photos on social media too and use the hashtag #tinandthyme, so I can spot them.

If you’d like other ideas for waffles or indeed pancakes, take a look at my pancakes & waffles category. I have a few.

If you prefer something a bit more neutral, simply leave the lemon and/or cardamom out. You could also replace with other flavours such as orange zest, cinnamon or cocoa. Replace rose syrup and/or drops with rose water or rose extract. Please note: calories and other nutritional information are per serving. They're approximate and will depend on exact ingredients used.

Andrew James is offering one Tin and Thyme reader a Volcano Waffle Maker. To be in with a chance of winning, please fill in the Gleam widget below. You will need to leave a comment on this post, answering the question, which then gives you additional chances to enter if you so wish. Gleam will pick a winner at random from the entries received. If you are commenting anonymously, please give me some way of identifying you as I will be verifying the validity of entries. Any automated entries will be disqualified. This giveaway is only open to those with a UK postal address. Winners will need to respond within 5 days of being contacted. Failure to do this may result in another winner being picked.
Prizes are offered and provided by Andrew James and Tin and Thyme accepts no responsibility for the acts or defaults of said third party. Tin and Thyme reserves the right to cancel or amend the giveaway and these terms and conditions without notice.
Closing date is Thursday 24 May 2018
Do take a look at the Tin and Thyme giveaways page to see if there’s anything else you’d like to enter.

I was sent a Volcano Waffle Maker to try. I was not expected to write a positive review and all opinions are, as always, my own. This post contains affiliate links to Froothie Optimum products. Buying through a link will not cost you any more, but I will get a small commission. Thanks to my readers for supporting the brands and organisations that help to keep Tin and Thyme blithe and blogging.
0
Shares
Share  on Facebook  Share  on Twitter
Tags: raspberries, rose syrup