You don’t need a waffle iron to make these delicious waffles with maple chocolate sauce. They’re oven baked waffles but still have that lovely fluffy interior and nice crispy exterior you expect from a good waffle. 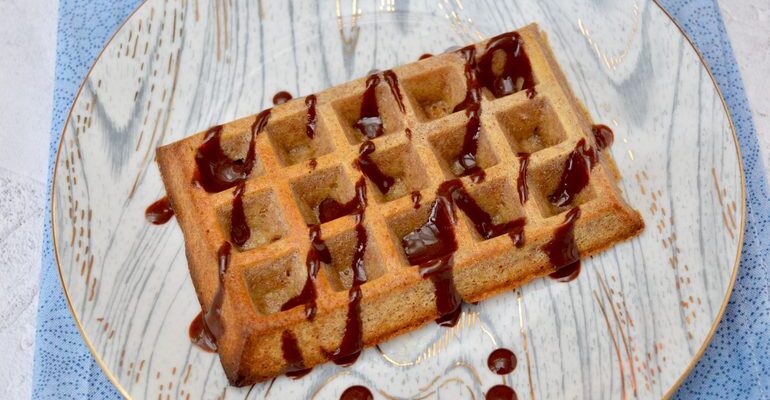 To me waffles have always seemed the height of elegance and sophistication. I’ve never eaten them here in the UK, but I have fond memories of the light and crispy delights offered to us at elegant establishments in Europe. On our visit to Ghent we had them served mit slagroom. Slagroom for the uninitiated is the Flemish for whipped cream. Jolly delicious they were too.

I think of waffles as a 3D pancake, with their neat little reservoirs which hold lots of butter, cream, syrup or whatever else you fancy to shorten your life. When I was sent some silicone waffle moulds* from Lékué to try out, it didn’t take me long to drop those eggs and flour into a bowl and start mixing.

My enthusiasm for Lékué remains unchecked with this, the third product I have tried. You can read my previous posts on the bundt mould and the bread maker by clicking on the links. Having used silicone bakeware for years, I have experience of the good, the bad and the ugly.

I’ve used cheap silicone moulds in the past and the performance really isn’t that good. Thin material results in uneven bakes where the bottoms get burnt and the batter doesn’t cook properly. Lékué silicone is a completely different ball game. It’s really sturdy and you can tell the products are of good quality by the look and feel of them. To boot, they come with a ten year guarantee.

The pack contains two moulds for oven baked waffles. Each one has four waffle patterns, so you can make up to eight waffles at any one time. The waffle indentations are well defined and they turn out perfect looking waffles. I find the moulds really easy to use. Initially I was concerned about how easy it would be to release the waffles, but they slip out of the moulds with no trouble at all. Not only that, but you don’t get all the smoke associated with hot metal, grease and batter. Or is that just me?

Another area where these waffle moulds score is their storability. They don’t take up much space at all. So if your kitchen is too small for a waffle iron, don’t worry, you can still enjoy crisp hot waffles.

Well you can’t have waffles without a drizzle or two of maple syrup. Can you?

The first time I made these waffles with maple chocolate sauce, I’d fortuitously been sent some Clarks maple syrup to try out. Waffles seemed the perfect vehicle to do so. Just in time for Pancake Day, I had four small 180 ml plastic bottles with squirty tops.  They were nice and easy to use, though I found the syrup to be rather more liquid than I was expecting.

Two were pure maple syrup and two were blended with carob fruit syrup, which seemed a little odd and unnecessary to me. I would rather have my syrup pure and dilute or mix it in whatever way I wish, rather than have it done for me.

In this instance, I didn’t want to adulterate the pure syrup and simply drizzled it over some of the waffles and served with a little whipped cream and pomegranate seeds. However, I had designs for the vanilla version, which I thought would help to make a luxurious chocolate sauce.

As well as using the maple syrup on the waffles and in the chocolate sauce we subsequently used them in a number of other ways. I do like maple syrup. But in order to get a real sense of their individual characters, CT and I also tried them neat. This is what we thought.

Original (blended with carob fruit syrup) – strong smoky, caramel, rich. Wouldn’t want to eat too much at any one time. Very sweet.

Vanilla (blended with carob fruit syrup) – reminded me of cough medicine that I used to have as a child – something I always viewed as a treat. Aromatic, with a strong vanilla flavour. Very sweet. I’ve used this one in the chocolate sauce to good effect. Although pure maple syrup is undoubtedly better.

Pure Canadian (No.1 Medium Grade) – less runny than the previous two and not as overpoweringly sweet. Smoky and tanniny with a drying-in-the-mouth feel. It was this one that we used on our waffles and it worked well.

Pure Canadian (No.2 Amber Grade) – this proved to be my favourite. It was sweeter than No 1 with a more rounded “maple flavour” but still with the tannins coming through.

The moulds come with instructions and a recipe for sweet waffles and one for savoury. The savoury waffles are quite delicious with an addition of Parmesan, oregano and paprika. I usually make them with cheddar cheese rather than the Parmesan and enjoy them with various topping. They make a great lunch. I topped the ones you can see here with Moroccan spiced carrot purée, olive and Greek yoghurt.

However, for my first attempt at oven baked waffles I decided to make some that were neither sweet nor savoury. I reckoned the maple syrup chocolate sauce would be quite sweet enough. And indeed I’ve never added sugar since. Apart from the sugar I use wholemeal spelt flour for the batter. Although that very first time I did use half wholemeal and half plain. Other than these changes, I stick to the recipe provided. This is mostly because it yields the perfect amount to fill the eight waffle moulds.

The first time I used the waffle moulds, I followed instructions and sprayed them lightly with oil. This isn’t something I normally do with silicone, but the waffles didn’t stick. And even though I’ve never done this since, the waffles still don’t stick.

The method for making these oven baked waffles is super quick and easy with very little fuss. You need to melt the butter first, but other than that you just need to mix everything up in a bowl then pour it into the waffle moulds.

Bake them in a hot oven for about ten minutes, then turn them out so that the waffle holes are showing. Place them back in the oven and bake for a further five minutes or so. Job done.

The oven baked waffles give a very good result with their fluffy insides and crispy outsides. And there’s plenty of holes to catch that maple chocolate sauce.

We just loved these. Two each was plenty, but very greedily and because we had them for brunch, we polished off all eight of them. Crisp on the outside and fluffy on the inside, I shall be making these waffles again very soon. Next time, if there are only two of us, I shall try freezing half of them for a quick and easy breakfast, brunch or dessert another time. The chocolate sauce was indeed rich and quite delicious too with a faint hint of maple that gave it an air of added luxury.

Of course you don’t have to eat them with maple chocolate sauce. There’s any number of toppings you can use. We also enjoy them with whipped cream and pure maple syrup.

Pancake Day will soon be here. I’m seriously thinking of renaming it Waffle Day. Maple syrup is, of course, a must. As is chocolate.

I’ve made this maple chocolate sauce many times now. But for my first waffle bake, I wanted something a bit special. So I indulged in some premium couverture dark chocolate, 70% Ocoa pur noir. I reckeded it would give a particularly rich and fulsome flavour. The aroma wafting up from the packet was of chocolate, caramel and tobacco. Thankfully the taste lived up to the promise that these smells evoked and multi layered notes hit the palate in succession.

This chocolate sauce is rich and deep and quite delicious too with a faint hint of maple that gives it an air of added luxury.

Lékué also sent two fabulous stretchy silicone covers. They fit over various sized containers from a half used tin of tomatoes to, in this instance, a bowl of maple syrup chocolate sauce. They’re also good for covering half eaten pieces of fruit such as an orange or melon. The reusable covers act as temporary lids creating a vacuum seal to keep leftovers fresh – a much better option than clingfilm in my opinion.

As there was plenty of chocolate sauce left over, I spooned it into a bowl and used one to cover it. It was both easy to put on and easy to take off. I ended up using the remaining chocolate sauce to make the truffle icing for my chocolate Valentine cakes. For the recipe below, however, I’ve given just the right amount for these eight waffles.

Thanks for visiting Tin and Thyme. If you make these oven baked waffles, with or without the maple chocolate sauce, I’d love to hear about it in the comments below. Do share photos on social media too and use the hashtag #tinandthyme, so I can spot them.

You may want to use a mix of half wholemeal flour and half plain if you're not used to baking with wholemeal flour.Please note: calories and other nutritional information are per serving. They're approximate and will depend on exact ingredients used.

I’m sharing these oven baked waffles with Lost In Food for #CookBlogShare.

Thanks to Lékué for sending me the waffle moulds and stretch tops to try out and to Clarks and Cacao Barry for the maple syrup and chocolate. I was not required to write positive reviews and as always all opinions are my own. Thank you for your support of the organisations and brands that help to keep Tin and Thyme blithe and blogging.