This recipe for chocolate cake waffles is a little unusual, but well worth a try. The waffles are at their best served warm with lemon curd and strawberries. Whipped cream makes them even more delicious and decadent. Best eaten for a special occasion dessert. 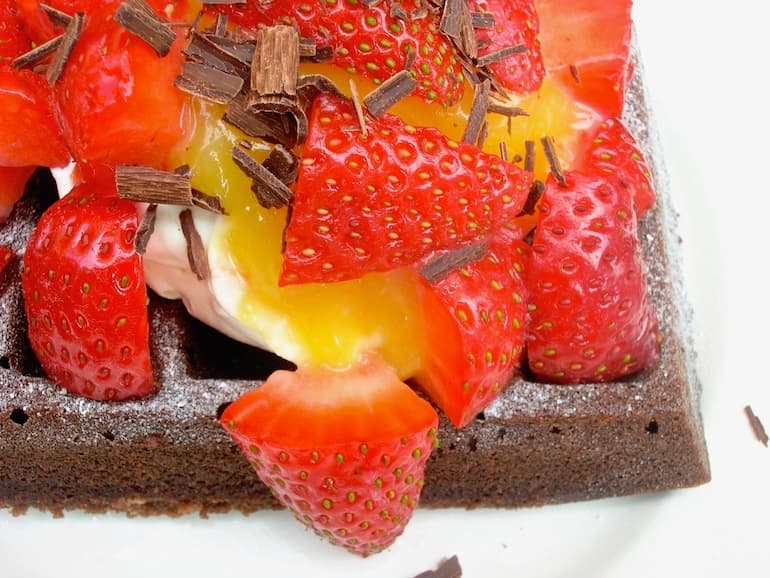 When I was browsing through Chocolat by Eric Lanlard in order to write the review I posted recently, I was caught by his recipe for chocolate waffles. I knew I would have to make them in the not too distant future. When I came back from a preserving course at River Cottage, laden with lemon curd (amongst other things), I knew the time had come. Chocolate waffles with a big dollop of lemon curd had my name written all over it.

So, a couple of days ago, I searched out my silicone waffle moulds, got out my trusty bowl and wooden spoon and gaily set out to follow the recipe, deciding to reduce it by half. I hadn’t got very far when I realised something was seriously wrong. What was Eric thinking of? Indeed what were his editors thinking of? I’ve made several recipes from this book and they have all turned out well, so I was expecting plain sailing once again.

It was the amount of sugar that first set the alarm bells ringing. Three hundred grams? Surely that couldn’t be right. If I’d read the recipe properly before I’d begun, I’d have realised this was a cake mixture not a pancake one. I’d then have made up my own waffle recipe instead.

However I’d already melted the butter and mixed some of the other ingredients, so I carried on, severely reducing the amount of sugar and increasing the milk from one tbsp, yes that’s right only one, to twelve. I had a look online to see if anyone else had reported any issues with this recipe. I couldn’t find any, so maybe I’m the first person to make it. Anyway, here is a link to the original ingredients so you can see for yourselves.

These waffles may not have been the light crisp affair I’d imagined, but they were still seriously good. Even with the reduced amount of sugar and the extra milk, these were still very much cake rather than waffle. They were quite substantial affairs and one was more than enough, so the four cake waffles I made lasted us over two days. We ate two warm from the oven, but the other two were just as good cold.

Strawberries are now in season so they had to be included. I managed to pick a few wild ones from the garden, which were totally scrumptious. If you can’t get wild strawberries, don’t fret, cultivated ones can be very nearly as good.

On day two we went well over the top with cream and bought strawberries in addition to the lemon curd. Strawberries and lemon curd I have now discovered are a match made in heaven. CT was equally enamoured. In fact the whole combination was superb and I now know what cake I’m going to make for next week’s party. The chocolate waffles will have to wait for another day.

Homemade lemon curd is the bees knees. It’s so much nicer than any commercial brand I’ve ever tried. For something a little different and if you’re in the middle of an apple glut, you could try making this apple lemon curd recipes instead.

Other Recipes with Lemon Curd

I’m sending these chocolate cake waffles off to Bookmarked Recipes with Jac of Tinned Tomatoes.

They also go to Made with Love Mondays over at Javelin Warrior’s Cookin w/Luv.

Likewise they go to Emily over at A Mummy Too for #recipeoftheweek.

And as strawberries play an important part in the consumption of these cake waffles, I’m sending them off to Lets Cook with Strawberries over at Simply Food.

Bake of the Week must not beforgotten either over at Caso Costello.

Cook Blog Share over at Supergolden Bakes also gets one of these chocolate cake waffles – I’m beginning to think I didn’t make enough!

Finally, one also goes to Tasty Tuesdays with Honest Mum.

Thanks for visiting Tin and Thyme. If you make these chocolate cake waffles, I’d love to hear about it in the comments below. And do please rate the recipe. Have you any top tips? Do share photos on social media too and use the hashtag #tinandthyme, so I can spot them.

If you’d like more waffle recipes, follow the link and you’ll find I have quite a lot of them. All delicious, of course.