A simple but delicious no-knead spelt bread loaf. The addition of cocoa and molasses give additional depth, flavour and colour. You can use the super easy manual bread maker as detailed below, or just bake it in an ordinary tin. 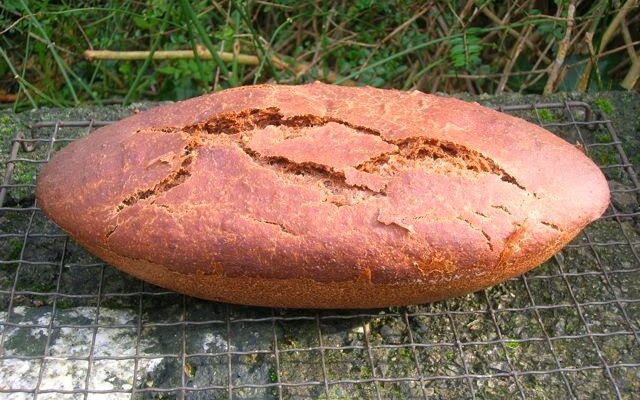 Bread is such a fascinating bake. There is so much variety in taste and texture to be had. Thankfully there has been a revival of interest in real bread in recent years, spearheaded in Britain by the Real Bread Campaign.

New techniques and methods are being invented or rediscovered all the time it seems. I’ve been making my own bread since I was a teenager – on and off. But it wasn’t until I attended a bread making course with Andrew Whitley a few years ago that I discovered, when it comes to water, more is definitely best. Wet doughs may be harder to knead, but generally give a much better result.

I’ve been hearing about no knead breads for a while now. My own rye sourdough requires no kneading, but could this really work for wheat breads I wondered? I really kneaded (get it) to try it out for myself. Thanks to the unexpected delivery of a Lékué bread maker, I finally managed it.

Lékué is a manufacturer of BPA-free silicone cook and bakeware from Spain. I was lucky enough to receive a bundle of their products to try out recently – you will, no doubt, see them popping up in subsequent posts. Their products are innovative, well thought out and of high quality. Certainly the three I’ve tried so far have worked well.

The Lékué bread maker* is a strange looking piece of kit and I was a little sceptical when I first took a look. Now I’ve used it, I’m completely won over. It’s basically a silicone bowl which doubles as a prover and baking tin, thus requiring little in the way of clearing and washing up. You can even knead the bread in the bowl and avoid having to oil or flour a work surface.

The bread maker comes with a few recipes, one of which is for a no-knead bread. It was time to try this new-fangled bake for myself.

It goes without saying that I adapted the recipe quite substantially. I used a mix of half wholemeal spelt and half strong white flour and added a teaspoon of my rye sourdough starter. Just for luck. Don’t worry, you don’t actually need that bit.

However, I also also added some cocoa and molasses, which I thought would give a nice rich dark loaf. And it did.

You don’t need a Lékué bread maker to make and bake this no-knead spelt cocoa bread. Just use a bowl and a 450g (1 lb) loaf tin instead. But it does cut down on washing and cleaning. Everything can be done in the one silicone bowl. Once you’ve mixed the ingredients together, just close the bread maker using its nifty catch, then cover with a cloth to prove.

Proving time will vary according to how active your yeast is and the warmth of your room. It’s better, both for flavour and digestion if the bread takes longer to rise. I left my no-knead spelt cocoa bread in a fairly cool room and it took four hours.

A Bread Recipe to Keep

This no-knead spelt bread is such a simple loaf to make. It has a great texture and is so very tasty. I can see this becoming a regular on our table when we need something a little different to rye sourdough.

The cocoa gives a depth of flavour without the bread tasting particularly chocolatey, which is just what I’d hoped for. The molasses adds additional complexity and a little sweetness.

I found I didn’t need to bake the bread for as long as the recipe stated, nor did I need to take it out of the bread maker and bake it upside down for the last 10 minutes. The recipe also warned that the dough should prove for at least six hours, but you’d need quite a cool room for that length of time.

We started eating the bread the day it was made, although the recipe stated to keep it for 24 hours before using. It did a grand job of mopping up our supper of shakshuka. As I’d hoped, it complemented this dish brilliantly. As I’ve made a chocolate version of shakshuka in the past, I sort of thought it might.

Over the next couple of days, we ate it as toast. It sliced well making few crumbs and was particularly delicious with poached eggs and then later with cream cheese and marmite.

The bread maker is extraordinary, I’m really quite excited by it. No mess, no fuss, it’s a one bowl wonder. Washing up is minimal. If I had some digital scales, I wouldn’t even have needed to get those dirty.

Admittedly, I made a no-knead loaf, so I’m unable to report on how easy it is to knead in the bowl. But, quite frankly, why knead when there is no need? It’s hard to believe that bread could get much better than this no-knead spelt bread.

Other Recipes Made with Lékué Products

Thanks for visiting Tin and Thyme. If you make this recipe for my no-knead spelt cocoa bread, I’d love to hear about it in the comments below. And do please rate it. Have you any top tips? Do share photos on social media too and use the hashtag #tinandthyme, so I can spot them.

If you’d like to see more bread recipes, follow the link and you’ll find I have quite a lot of them. All delicious, of course.

Makes a 450g (1 lb) loaf.The time it takes to prove the dough will depend on the warmth of the room, but a slower rise is generally better for both flavour and digestion. Four to six hours is good.If you don’t like the sound of the cocoa powder, just leave it out.Please note: calories and other nutritional information are per serving. They’re approximate and will depend on exact ingredients used.

Thanks to Lékué for the bread maker. There was no requirement to write a positive review and as always all opinions are my own. This post contains affiliate links which are marked with an asterisk*. If you buy through a link, it will not cost you any more, but I will get a small commission. Thank you for your support of the brands and organisations that help to keep Tin and Thyme blithe and blogging.

Previous Post: « Chocolate by Miss Witt: An Unexpected Find In The Forest
Next Post: Chocolate Orange Marble Cake: A Tale of Two Bundts »