If you’ve every thought about visiting Belgium, don’t miss out on a trip to Ghent. By all accounts it’s heaps better than going to Bruges as there’s lots to see and do and it’s not nearly as touristy. 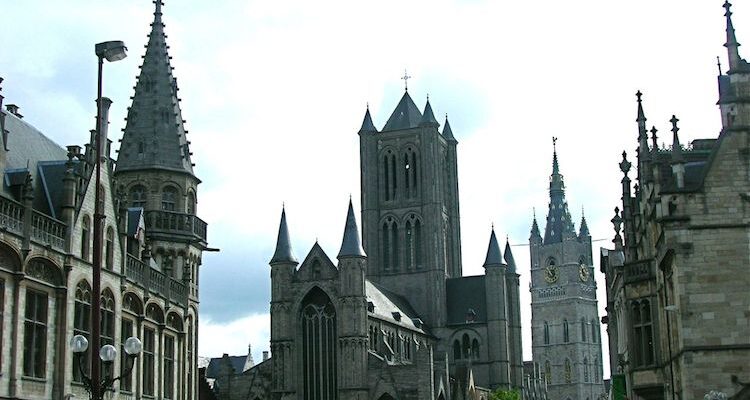 There is so much to say about the wonderful city of Ghent, I hardly know where to begin. It’s a city about the size of Plymouth (where I work) and it couldn’t be more different. It’s flat for a start.  Flat, of course, makes it nice and easy for cycling and it was truly wonderful to see so many cyclists scooting about. How I miss my bike.

The number of bicycles combined with the many cobbled streets act as a form of traffic calming and presumably a car deterrent too. So much of the old city was car free. What bliss.

To my shame, the only things I could recall about Belgium (other than chocolate, biscuits and beer) was – ahem – Hercule Poirot and a rather hazy recollection of a poem about bringing good news from Ghent.  On investigation, it turns out that Robert Browning’s poem, How They Brought the Good News from Ghent to Aix doesn’t actually refer to any historical event – a complete red herring in fact.

I have to say, now I’ve spent a week in Ghent, I’m not much the wiser. However, I did glean a few facts.

Ghent was a wealthy city as fertile plains surround it. By the amount of rebuilding and refurbishment going on, I assume it still is. In the 1340s, Jacob van Artevelde was forced into siding with the English during the 100 years war. The upside of this was that Ghent remained largely untouched by the devastation which affected much of Northern Europe at that time.

His statue now ordains the Friday Market Square in Ghent and he is now much revered, despite ending up being killed by an angry mob. As an aside, it transpires that the renowned John of Gaunt, virtual ruler of England in the 1370s was in fact born in Ghent.

The end result of all this wealth is the most amazing and interesting architecture I think I’ve seen in an average sized European city.  The sheer number of enormous buildings in themselves is breathtaking, castles, monasteries, cathedral, churches, guild houses, operas, theatres and more.

The photographs I’ve included here are only a very small selection.  But it’s also interesting as architectural styles are very different and no two buildings seem the same.

The number of canals really struck me. I hadn’t expected that at all. Some were as bold as brass but we came across many others tucked away in unexpected places. Inevitably this means there are a whole heap of beautiful bridges to stand on or admire.

Conveniently for us, our hotel was situated right in the main Central Square. As soon as we’d dropped off our luggage, we went out to explore the it, which involved much oohing and aahing over the St Bavo’s Cathedral, the Belfry Tower and the Royal Dutch Theatre. When I reviewed the photos we took on our return, I realised that neither of us snapped a picture of the cathedral – honestly!

We managed a peek at The Adoration of the Mystic Lamb painted by the brothers Van Eyck but somehow failed to see the Rubens.

It was in the Central Square that I spotted my first chocolate shop – the first of many.  Really, it was astonishing just how many and varied they were.  So many beautiful displays and most looking exceedingly tempting.  The only one I couldn’t bring myself to go into was one featuring a window full of fluffy bears sitting amongst the chocolates.

As well as the pralines and truffles one expects from traditional Belgian chocolates, there were lots of more unusual offerings.  Tea flavoured chocolates seemed to crop up in quite a few places.

Unfortunately, the poor exchange rate meant everything in Ghent was really expensive so I didn’t indulge as much as I might have otherwise done.  And, of course, I did have to bring a few presents back.

The most strikingly different shop though was Yuzu, a Japanese inspired chocolatier which also sold Japanese teas and teapots.  Here I found some very unusual flavours and decorations; each chocolate was a piece of modern art.  These I just had to try.

I decided to make a selection of ten.  A difficult decision, but with the aid of the chocolatier, Nicolas Vanaise, a man passionate about his trade, I made my choice as follows:

These chocolates didn’t come in a beautifully wrapped box, but in a Japanese style plain envelope, which suited them admirably.  Having made my purchase Nicolas then offered me one on the house to eat then and there. I went for the all dark, which although it had no additional flavouring, was very good indeed.

Nicolas makes all of his ganaches with soya so they’re actually dairy free. This, he claims, gives them a much lighter texture than cream; I can report that the consistency is very good.

Hoorah, vegan friendly chocolates, which meant my vegan work colleague didn’t have to miss out on the goodies as he normally does. I thought these were really fun and very interesting, but being a dairy girl at heart, it’s unlikely they’d ever be my first chocolates of choice.

One of the most delicious sweet treats I enjoyed were these famous Ghent cuberdons. They’re made with fresh raspberry puree which has a shelf life of only four weeks. Traditional cuberdons are cone shaped. They’re firm on the outside and soft on the inside. But we bought some particularly interesting mask-masked shaped ones, which were a house speciality.

In all the chocolate excitement, we couldn’t forget hot chocolate. We sampled a couple in fact: one in a cafe and the other in a chocolate shop. Both were really good. The above image was from the chocolate shop and it was a showstopper to look at. But if truth be told, I think we both enjoyed sitting outside in a little square sipping the cafe’s plain chocolate best.

Another very pleasant surprise for me was the number of vegetarian cafes and restaurants to be found.  I sampled three of them and saw a couple of others I’d like to have tried.  It’s not often I go to places and get spoilt for choice.  All of the meals I had were good, but two of them were exceptional, featuring one of my favourite foods, tempeh.

Lunches served at the conference were also mostly vegetarian and again very good.  Little did I know I was going to a vegetarian foodie mecca.  However, Ghent is even more progressive than this: it promotes Vegetarian Thursdays. This is where over 100 restaurants offer either an exclusive vegetarian menu or at least a good choice.  Hospitals, schools and local government offices also participate in a bid to encourage healthy eating and food sustainability.

A post about Belgium would not, of course, be complete without mentioning the beer. And I’m sure VegBoxBoy would be most disappointed if I didn’t. As I’m not a great beer drinker, I didn’t go wild. But I did manage to sample a few different beverages and very nice they were too. My absolute favourite was an organic spelt beer.
You can see from the photograph above that it could take some time to work ones way through the many varieties that are on offer in Belgium. There are over 800 I believe and that doesn’t include the specials.

The conference over, I had to look for accommodation in a cheaper establishment.  It was a bit hit and miss as I plumped for the first place I could find on the internet that looked reasonable and was not already booked.  I chose Beatrice and Marcus B&B which was about a 20 minute fast walk from the Town Square.

Luckily, it was delightful and so much nicer than the bland corporate anonymity of the chain hotel we’d been staying in.  Our Flemish hosts were very friendly and helpful. We had a large room, a lovely comfortable bed and an ample yet delicious breakfast which included home made jam.

Marcus drove us to the train station on the morning of our departure. This was because we were concerned the buses might not be running due to the extensive road works being undertaken. This was not only a kind act, but well beyond the call of duty, we thought.

So Much To Do

There is so much else to say, this post risks being rather too lengthy and verbose. But I will just mention that Ghent has a really good botanic garden belonging to the university. CT was impressed anyway and spent the best part of a day there and then took me to see it later on in the week.  You may like to see his post on the visit.

I was lucky enough to see a performance of Shake That, courtesy of the conference.  This was a sort of humorous juggling act performed by five Ghent lads using bottles, cocktail shakers and fruit.  In addition Ghent was hosting a jazz festival during our stay and whilst neither of us are big jazz fans, we thought we should put in an appearance.

The nearby park was hosting the jazz festival. So we attended on our last evening. The band was good and the atmosphere was nice and friendly. It was a pleasant way to take leave of this wonderful city.

By the time we arrived home, all chocolate, bar a few gifts, was gone. There was nothing sweet in the house bar the chocolate I reserve for baking. So it didn’t take me too long to knock up a batch of these chocolate fudge brownies. They may not have been up to the standard of all those delightful Ghent chocolates, but they hit the spot very nicely.

Thanks for visiting Tin and Thyme. If you ever visit Ghent, I’d love to hear about it in the comments below. Have you any top tips? Do share photos on social media too and use the hashtag #tinandthyme, so I can spot them.