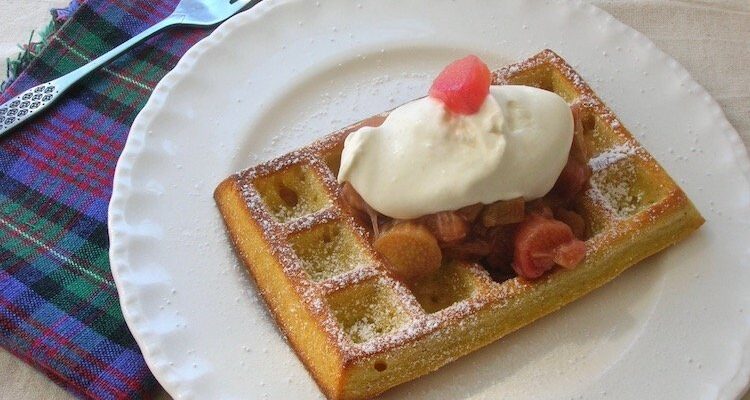 Waffles are such a delight. I was late to this particular way of cooking batter and didn’t get to try my first one until I visited Ghent a few years ago. There’s more to Belgium than just chocolate, I found. Waffles abounded and they were just fabulous. I finally realised what I’d been missing out on all this time.

Ever since getting my hands on these silicone waffle moulds, I have become somewhat addicted to these doughy crispy delights. They are just as good for a dessert as they are for breakfast or brunch.

The light and airy sweet waffles I tried in Belgium were either served in the morning with coffee, or at tea time. They don’t have to be sweet of course, savoury waffles are equally delicious. Either way, I never add sugar to my waffle batter as I don’t see the need – it’s all in the toppings.

If you don’t have silicone waffle moulds, this batter will work just as well in a more traditional waffle iron.

For some reason, rhubarb doesn’t like it down on our plot and I have to rely on my mother for a supply. She bought round the first rhubarb picked from her garden last week. It was just in time to bake this rhubarb and ginger cake for a friend’s birthday.

As there were a couple of sticks left over, however, I thought I’d treat us to some rhubarb and rose compote and serve it with waffles, oh and cream, of course.

I make a couple of bottles of rose syrup every year and what doesn’t get used in cooking makes for a most sumptuous cordial drink with water, both fizzy or flat. However, this time I used Spice Drops rose extract, which also worked wonderfully well.

The waffles were the usual crisp and doughy delight, but the rhubarb and rose compote was just gorgeous. Light and fruity with a delightful rose perfume which added wondrous floral notes but didn’t overwhelm. As for the cream, well! Those softly scented clouds will just have to be repeated.

Now I’ve discovered this most delicious rhubarb and rose compote, I make it a lot when it’s in season. It makes a good topping for waffles and pancakes of course, but it’s also delicious with custard or ice-cream. Warm or cold, it’s equally good.

I also regularly enjoy it atop my morning porridge or with homemade granola and yoghurt.

Really what I’m trying to say is, cook up a decent quantity and you’re bound to find plenty of ways to use it.

I’m linking up these waffles with rhubarb & rose compote to the following:

Great British Rhubarb Recipe Round-Up over at Lavender and Lovage and Farmersgirl Kitchen. It’s all for the love of rhubarb.

No Waste Food Challenge with Elizabeth’s Kitchen Diary. There was no way I wasn’t going to use these first sticks of rhubarb, but they were sort of leftover from the cake and they might otherwise have been wasted.

Thanks for visiting Tin and Thyme. IIf you make these delicious waffles with rhubarb & rose compote, I’d love to hear about it in the comments below. And do please rate the recipe. Have you any top tips? Do share photos on social media too and use the hashtag #tinandthyme, so I can spot them.

If you’d like more rhubarb recipes, follow the link and you’ll find I have quite a lot of them. All delicious, of course.

Waffles with Rhubarb and Rose Compote and Rose Cream

You can use this batter in a waffle iron. Just follow the model’s instructions.Please note: calories and other nutritional information are per serving. They’re approximate and will depend on exact ingredients used.