If you’re a shortbread fan, you’ll find a whole plethora of ideas for white chocolate shortbread biscuits in this post. They are all delicious and the variations are endless. If you like the idea of lemon, orange, coffee or matcha flavours, we’ve got you covered. 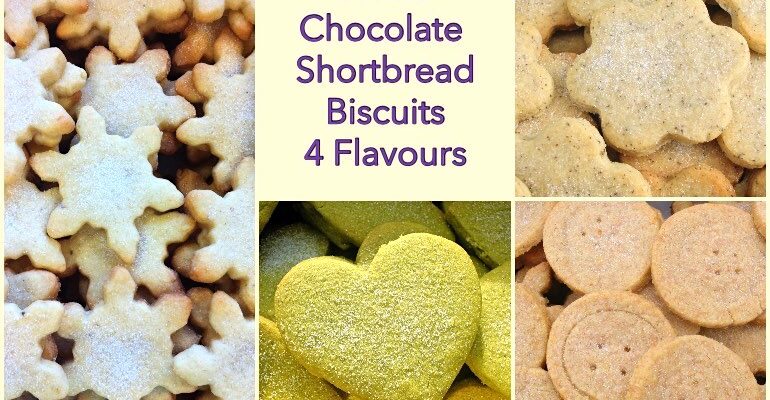 Shortbread is one of the easiest cookie bakes to make. It’s also one of the most delicious. My recipe for white chocolate shortbread requires only a little extra effort. It produces a slightly less crumbly biscuit, but one that is perfect for cutting into shapes.

As well as a mix of wholemeal and plain flour, I’ve used brown rice flour. If you find this difficult to get hold of you can use semolina instead.

I haven’t quite decided what biscuits I shall be making for Christmas this year, but as I’ve ordered some organic oranges, I’m currently in favour of making some orange and cinnamon flavoured ones. By the new year, I suspect I shall be thoroughly fed up with shortbread.

Like their chilli shortbread predecessors, any of the following recipes would look good pierced and hung with ribbon from the Christmas tree. They’d also make lovely Christmas, birthday or thank you gifts.

But don’t think these gorgeous shortbread cookies are only for Christmas. They will be appreciated at any time of year.

Recently I baked for a friend’s birthday party. As well as a variety of cakes and tarts, I thought it would be fun to make “after dinner” tea and coffee biscuits.

With 100 guests expected, I made two batches of the biscuits which resulted in 110 in total. To one I added Japanese matcha tea powder. This gives an intriguing tea flavour and a beautiful green colour. And to the other batch I added some ground coffee which gives an interesting speckled look and a mild but definite coffee flavour.

Instead of freshly ground coffee, you could use spent coffee grounds instead. Love food, hate waste.

These white chocolate shortbread biscuits proved to be rather popular, especially, it seemed, for scooping up a very large trifle that someone made for the occasion.

Even more recently, I made over sixty lemon and cardamom biscuits for my last day at work. I can’t quite believe I’ve left after all these years. But the shortbread went down very well.

In the end I did make a batch of orange & cinnamon white chocolate shortbread biscuits. Sweet, spicy and citrussy, they were just perfect for Christmas. I piled them into bags, tied with a ribbon, labeled and gifted them to various friends. I did manage to snaffle one for myself and it really was most scrumptious.

You’ve probably guessed by now that shortbread is my absolute favourite biscuit. Just in case you don’t already have enough ideas with these white chocolate shortbread biscuit variations, here are a few more.

Thanks for visiting Tin and Thyme. If you make any of these delicious shortbread delights, I’d love to hear about it in the comments below or via social media. Do share photos on social media too and use the hashtag #tinandthyme, so I can spot them.

Instead of freshly ground coffee, you could use spent coffee grounds instead. Love food, hate waste.Please note: calories and other nutritional information are per serving. They're approximate and will depend on exact ingredients used.

Well as far as cookies go, these white chocolate shortbread biscuits are fairly Quick and Easy to make. Which makes them eminently suitable for this month’s The Biscuit Barrel with Laura of I’d Much Rather Bake Than … The stamping can be fiddly if you use a small snowflake cutter as I did for the lemon cardamom cookies. But if you use a larger and simpler stamp it doesn’t take very long at all.

As I buy my wholemeal flour locally at Cotehele Mill, I’m entering these very British biscuits into Shop Local at Elizabeth’s Kitchen Diary. Cotehele has a traditional water powered mill and grinds local flour with stone.

And as all of my shortbread is made from scratch, I’m sending some of these to Javelin Warrior for his Made with Love Mondays.

I’m also sending my orange & cinnamon shortbread to the Spice Trail over at Bangers & Mash. The chosen spice this month is cinnamon.