Ginger biscuits are incredibly popular, but have you tried crystallised ginger shortbread biscuits? They’re easy to make and taste fabulous. Little chunks of ginger give a welcome chewy texture and a warming spicy flavour. 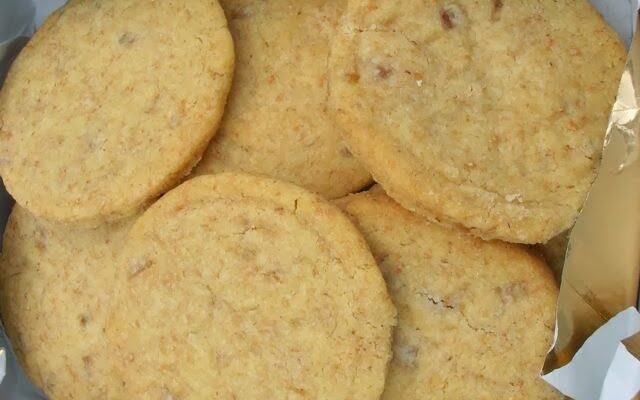 I really thought the orange and cinnamon shortbread was going to be my final shortbread bake. For this Christmas season anyway. But somehow, I found that the chilli and all the other flavoured shortbreads just weren’t quite enough. Where was ginger in the equation?

Some friends recently hosted an Open House to show off the beautiful eco home they’ve just finished building. You can find out more and see some fabulous pictures on the Pentiddy Housebuild 2013 blog. The interior is just how I imagine a hobbit hole to be.

Although it wasn’t actually raining, I felt a warming spice was needed. So I baked some ginger and white chocolate shortbread biscuits and took them along. I also sent a box off to a friend as a New Year’s present. These were the first biscuits I’ve ever sent by post, so I was relieved to find they arrived in one piece.

Just before Christmas (as in Christmas Eve), Wilko sent me a delightful “Home Made” vintage  cookie press, which also had “Baked with Love” and “Eat Me” options. It arrived a little late in the day for Christmas biscuits, but I was keen to try it out, having exhausted the Christmas stars, hearts and snowflakes.

The stamp worked really well. The rubber moulds are interchangeable and can be washed separately as needed. They fit well on the handle and are not too difficult to remove. My only complaint was that, although there was a hole in the handle for a piece of string to hang it from, there was no string supplied. So I had to hunt around for something appropriate. It’s now hanging up in my kitchen where I can grab it as soon as the cookie baking urge descends.

With the amount of ginger shortbread dough I’ve given in the recipe, I stamped out 28 circles. This was with the dough rolled out to about 6mm in thickness. I had to dip the mould in flour between each stamp to avoid sticking, but I was working with a particularly sticky dough.

I should really have taken a picture before they went into the oven as the crisp lettering in the dough looked really good. Sadly, the writing didn’t hold through the baking process and the words could not be deciphered. Note to self: this stamp does not work with shortbread. However, the biscuits tasted fabulous and the lumps of ginger gave a welcome chewy texture and were as warming and spicy as I’d hoped.

Thanks for visiting Tin and Thyme. If you make these crystallised ginger shortbread biscuits, I’d love to hear about it in the comments below or via social media. Do share photos on social media too and use the hashtag #tinandthyme, so I can spot them.

If you’d like more ginger recipes, follow the link and you’ll find I have quite a lot of them. All delicious, of course.

Calories: 46kcal | Carbohydrates: 5g | Protein: 1g | Fat: 3g | Saturated Fat: 2g | Cholesterol: 6mg | Sodium: 1mg | Potassium: 10mg | Fiber: 1g | Sugar: 2g | Vitamin A: 71IU | Calcium: 3mg | Iron: 1mg
Tried this recipe?Please take a photo and mention @choclette8 or tag #tinandthyme on Instagram, Twitter or Facebook.
Thanks to Wilko for sending me a cookie press to try out. There was no requirement to write a positive review. As always, all opinions are my own.
Previous Post: « Baileys Chocolate Banana Pie aka Choconana Pie
Next Post: Tiramisu Cake »