There are three books out this year which have caused a lot of excitement amongst many a food blogger. Unusually, they are all by the same author. It almost feels like a shared success when one of our own gets a cookbook published. Charlotte Pike of Charlotte’s Kitchen Diary went one better than writing her first book and getting it published, however – she managed three all in one go. How she achieved this whilst running a successful business, blogging for the Guardian and Hello magazine and giving cookery demonstrations beats me. It’s an astonishing feat which I put down to a lot of hard work and very good planning.

The Hungry Student – who doesn’t resonate with that concept? As the name implies these books are aimed at students living away from home for the first time and offer simple but tasty recipes that don’t cost the earth. Just a few years out of University herself, Charlotte remembers well what it was like to survive on a very tight food budget. My student years were spent consuming lentils. I have a great fondness for this humble pulse, but my repertoire could have been expanded and any one of these books would have been ideal for the task.

Never mind the hungry student, these books are ideal for the hungry worker too. I know when I get home from work or have been digging down at the plot, I want something hearty, filling and quick. Charlotte delivers plenty of ideas along those lines. 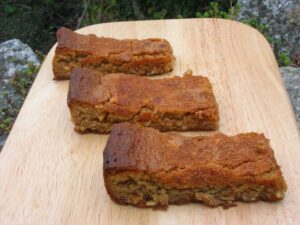 The recipes have all been tried and tested prior to publication, both by Charlotte and a willing team of testers – I know because it was my privilege to be one of them. One year on and I still remember how good those peanut butter blondies were. I really must make them again.

I couldn’t wait to get my hands on the books and finally see what they looked like. As a thank you for the testing, I was sent all three copies. As they arrived around my birthday, I took them to be a very welcome impromptu birthday present. I was really impressed with their overall appearance and ease of use. The covers are fun and colourful. The layout is clear and uncluttered and there are plenty of mouth-watering pictures although sadly not all recipes are accompanied by one. There are some recipes that appear in more than one book, which is a bit annoying if you have the complete set, but to be fair there isn’t too much of an overlap. Published by Quercus, the books can be bought as single editions or as a set and are extremely good value I reckon at only £7.99 per book.

Having tested some of the recipes last year, I know how good they are: they work. Post publication, I have tried a few more and can vouch for the fact they are not only reliable, but delicious too. Thankfully and as you’d expect, there are lots of chocolate recipes in all three of the books. I’ve had no problems finding plenty of enticing bakes to make. 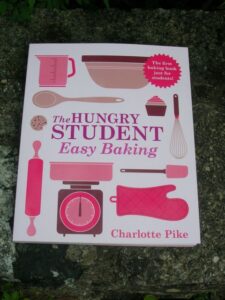 Being a keen baker, this was of course, the very first of the three that I energetically leafed through. Whilst this is an excellent book for the beginner, there are a multitude of recipes that will appeal to the more experienced baker – they certainly appealed to me. It starts with some information and a few handy hints focussing on key ingredients and baking techniques. Chapters include: Small Bakes, Big Bakes, Traybakes, Baked Desserts and the not to be forgotten Breakfast Baking where the picture of a tray of cinnamon buns had me leaping around with delight. Bread has not been forgotten and the chapter on Easy Breads includes some basics such as crusty white loaf, wholemeal soda bread and pizza bases but also some more unusual flatbreads and a spectacular sounding cheesy courgette caterpillar bread loaf, which, with the current courgette glut we are experiencing, is on my list of things to bake soon. 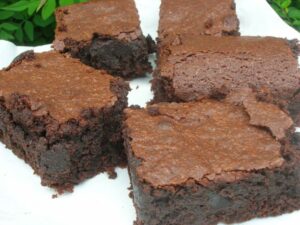 No sooner did I see Charlotte’s recipe for chocolate fudge brownies, than I had to give them a go. I made them for the Liskeard pop-up cafe back in July where they received rave reviews and every single one of them disappeared. Luckily, I did manage to snaffle a piece so I can attest they were truly fudgy with a satisfying crunchy top. In fact, I would go as far as to say these were amongst the best brownies I’ve made and I’ve made quite a few. 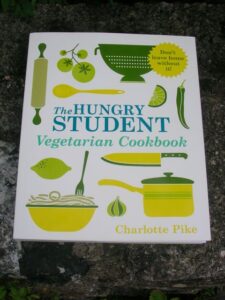 As well as a host of useful tips on cooking, ingredients and equipment, this book includes a section on How Not to Poison Your Friends – if you value your friends, you will follow this advice. As well as the sort of chapters you’d expect in a student book, such as pasta, curries and easy dinners, there is a handy one on Feeding Friends which gives a few more elaborate recipes and ups the quantities somewhat. The Morning After chapter gives a host of interesting breakfast dishes which are simple but tasty and make a nice change from a bowl of cereal.

Being vegetarian, I was especially pleased to have this book and I remember well the lovely creations I tried out when recipe testing. Lentil shepherd’s pie is a dish I make regularly, but Charlotte’s take on it was quite different to mine with added mushrooms and red wine and it was very good indeed. Veggie toad in the hole is another regular in this household, but I’d not had it with onion gravy before and that notches it up a few levels. Until testing these recipes, I had never baked a risotto in the oven, but the baked squash risotto was delicious and so easy. With plenty of Swiss chard down at the plot, one of the first recipes I made was spiced spinach with black eye beans and very tasty it was too. Baking, of course, gets a mention and I was so intrigued by the chocolate red wine cake, I had to make it immediately. Assuming the concept of leftover wine is not a foreign one to students, this is a brilliant use for it. I jazzed it up a bit with icing and decorations and took it into work where it went down a storm. 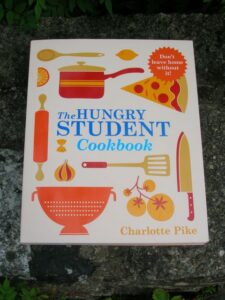 This is an all round cookbook which includes a bit of everything. As with the others, it starts with sections on stocking up your store cupboard, loving your oven and various other cooking tips and techniques. A section on watching your budget is a particularly useful one for students and includes the suggestion to “see if your parents will take you shopping” which made me laugh. The book was divided into the same chapters as the vegetarian cookbook, although most of the recipes were of course different. Being a bit of a bread head, the chapter In Bread and on Toast grabbed my attention. I’d already tested both the cheese and beer rarebit and the cheese and leek rarebit. The latter was so good, I’ve made it several times subsequently. 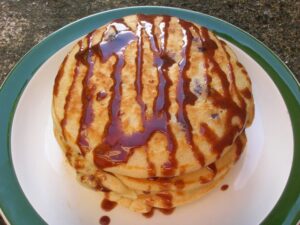 As a vegetarian, I still found plenty in the book to keep me going. Coconut rice was one of the first things I tested. Adding coconut milk to basmati rice and serving with toasted sesame seeds is such a simple adaptation, but very effective and quite delicious. I remember the patatas bravas with great fondness, but keep forgetting to make them again. On my list of things to try out soon are the black bean quesadillas and the halloumi and roasted vegetables with lemon dressing – another way of using up courgettes. When I make pancakes, I tend to make English ones, but I was inspired by the tempting photographs for American pancakes in this book and was very pleased I gave them a go. Adding blueberries to the batter is a technique I have subsequently adopted.

In summary these books are for students of life, not just university. That said, as students prepare to head off and face life in a shared kitchen, now is the perfect time to buy these books. Perhaps parents could assist by taking their little darlings book shopping.