Three of a Kind

Well, three of a kind is a bit of a misnomer really – I just liked the snappy title. There are three books and they are all cookbooks; they are even all of the same size, but there the similarities end. The fact that all of them contain recipes for chocolate is, of course, a given.

The subtitle of this book, seductive recipes for bakes, desserts, truffles and other treats says it all really. If you know anything about Eric Lanlard you will know that moderation, when it comes to ingredients, is not his strong point – something I heartily approve of. Last month’s We Should Cocoa was all about making chocolate cakes for £1, these recipes go to the other extreme. The book screams indulgence and my goodness what a lot of mouth watering recipes there are.

Eric starts off with a brief history of chocolate. Given the extraordinary and long history of chocolate, this one page summary really is rather brief, but will no doubt be interesting to those who have little knowledge of it. In the context of this work, it’s absolutely fine; it’s a book of recipes not a treatise on chocolate. Next up is a short section on working with chocolate which includes melting and tempering. Again, there isn’t a great deal of detail given, but the basics are there. The main part of the book is divided into four chapters: From the Bakery, Desserts & Puddings, Truffles & Treats, Drinks, Spreads & Sauces. Here are some recipes that took my fancy: white chocolate and passion fruit cheesecake would make a perfect dessert for a dinner party; salted butter caramel cake is on my absolutely must bake list; pink fizz champagne truffles are surely an essential for any wedding and I’m planning on drinking my way through the swathe of cocktails, shakes and hot chocolates.

As you can imagine, the photographs look absolutely sumptuous and I was pleased to see there were a lot of them. Not every single recipe has an accompanying picture, but the vast majority of them do. I defy anyone not to crave something dark and decadent after viewing any one of them. 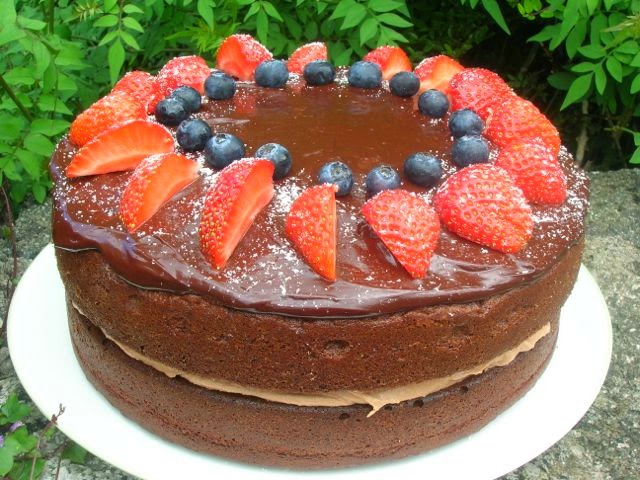 I’ve made a number of recipes from this book and they’ve all proved to be a rip-roaring success. Last year I made the dark chocolate moelleux for a Liskeard event and it was one of the first cakes to disappear. A large rich, dark and very tasty chocolate sponge is filled with chocolate buttercream and topped with a dark chocolate ganache and as much summer fruit as you want to put on it. For the same event I adapted Eric’s recipe for white chocolate strawberry tarts. These also proved to be extremely popular and disappeared rather fast. I had already played around with making some white chocolate raspberry tarts based on the same recipe, so I knew they were good. An enriched sweet pastry is filled with strawberry compote, topped with a white chocolate Chantilly cream and then decorated with strawberries. The Chantilly cream works wonderfully with fruit and I’ve used it on a number of occasions since.

White chocolate and lemon madeleines are another recipe I’ve tried. Like the others, they still haven’t been written up – oh the life of a busy chocolate blogger! Again the recipe worked extremely well. Not only were they very tasty, but they had the classic foot too, which isn’t something that always happens with madeleine recipes in my experience.

Everyone needs a book of indulgent chocolate treats I reckon and this is one well worth having. This 176 pages of sumptuousness is published by Octopus Books as a hardback and retails at £18.99

Compared to the previous book, the recipes and photographs are more restrained and less extravagant. The subtitle, heavenly recipes for desserts, cakes and other divine treats is still highly applicable though.

I’d not come across the author Jeniifer Donovan before receiving this book, so I was interested to find out about her. She was born in in Australia, but now teaches cooking in London. She has written several cookbooks including The Big Book of Chocolate – gosh!

The introduction briefly describes what chocolate is, how to store it and how to cook with it. Tempering is mentioned but not described, which seems a little strange for a book all about chocolate. This is followed by a few basic recipes such as shortcrust pastry, chocolate custard and caramel sauce.

The main recipes are divided into seven chapters: Quick-Fix-Desserts, Chocolate Heaven Desserts, Cakes & Bakes, Pastries & Puddings, Ices, Chocolate Treats & Drinks and Sauces, Icings & Frostings. After the index there is a handy page to make your own notes on, something I’d find useful as I don’t like to spoil books by scribbling all over the recipes – I am a Librarian by training after all!

I haven’t had the book as long as Chocolat so although many of the recipes are bookmarked, I’ve only made a couple of them so far. We had these chocolate scotch pancakes for Pancake Day. They worked well and were thoroughly delicious especially smothered, as they were, with maple syrup and nectarines.

Chocolate & chestnut mess sounds like an excellent alternative (or addition) to the Christmas Day pud and one that I might be trying this year. A handy tip for making some rather striking mini white chocolate cheesecakes is to line a muffin tray with a strip of paper so the finished cheesecakes can be lifted out easily without damage. A chocolate ricotta cake I spotted has absolutely to be tried. I’m still unsure as to the combination of dark chocolate and lemon, so I might need to make the tangy lemon and chocolate tarts to help me decide. Chocolate sorbet has long been on my to make list, so I was pleased to see a recipe for it in the Ices section. Peanut butter & milk chocolate truffles sound quite unsophisticated compared to the cranberry & port truffles, but just the thing I would find quite scrumptious. In my book, you can never have too many sauce and icing recipes, so chocolate rum frosting here I come. 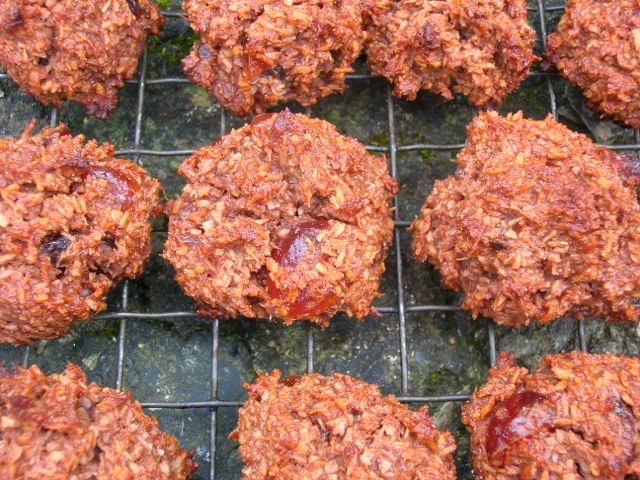 If you like coconut, as we do, these chocolate cherry macaroons are rather moreish, though the glacé cherries did make them quite sweet. This was the first time I’ve every made coconut macaroons using coconut cream. This gave an extra dimension to the general coconuttiness and made these macaroons more sophisticated than your average.

I was surprised to see that the recipes in this book have no introduction, something I take as a given in any serious cookery book. A little note from the author giving some background information or stating why they like a particular recipe makes a big difference when choosing a recipe to make. It also personalises the book making it an interesting read in its own right, rather than just a collection of recipes.

This is a good book for cooks who have some experience but want to increase their recipe repertoire.

Whilst not exactly a chocolate book, this is all about the sweet stuff and does include a fair few chocolate recipes. Sumptuous was the word that sprang to mind when I first saw the book. Like Eric Lanlard’s Chocolat, the recipes are rich and indulgent and the photographs leave you in no doubt of this fact. I guess it must be that French love of butter, cream and other naughty fare – oh la-la!  I can’t be far wrong because the subtitle here reads: a collection of cakes, tarts, pastries and other indulgent recipes. Fanny is a pastry chef who grew up in France, has travelled the world and now lives and works in London. This is her first book.

As can be seen from the front cover, there is a sense of fun here. I found it to be really quite delightful. The book is “served” by the author with the following recipe:

Not quite sure I’d like my delight to be crushed, but you get the gist. Fanny speaks throughout the book conversationally, with verve, passion and a large pinch of poetry. The book offers an insight into the psyche of a French artiste. She starts by reminiscing on how she learnt to bake in her grand-mère’s French kitchen. A few pages of ingredients and equipment follow. The ingredients are all standard apart from when she talks about ice-creams when suddenly dehydrated glucose and stabilisers come into the equation. The list of equipment used is really quite scary. How many kitchens have a blowtorch, metal rings and acetate? Or is it just mine that’s lacking?
This is a book for browsing and reading before going to sleep at night rather than a systematic approach to the subject. The recipe chapters don’t seem to be organised in any logical order, but obviously mean something to the author. Nor are the headings necessarily explicit; anything could come just about anywhere. 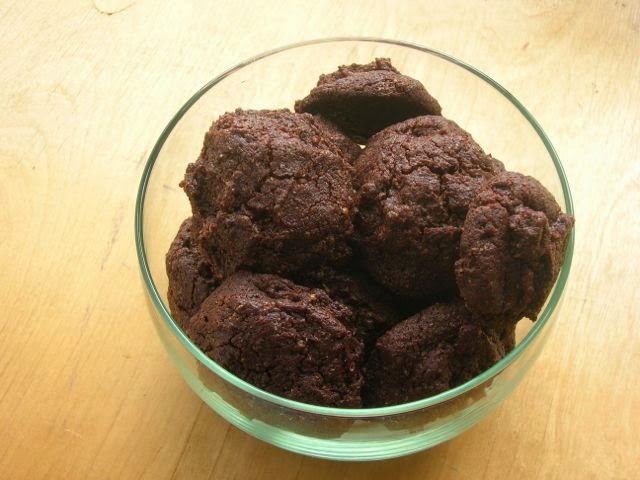 Fanny demonstarably has a very sweet tooth. Whilst ricotta & honey doughnuts sound delicious in the extreme, I can’t see these making their way to my puritan breakfast table any time soon. However the almost-instant chocolate fondant cake is a must. Pistachio nougat sounds delicious, but it is one of those things you really need a stand mixer for and I don’t have one, so this will have to wait. Vanilla ice-cream with olive oil is a completely new one on me and now must of course be tried. The deconstructed pumpkin pie really isn’t my thing, but I guess all chefs have to have a go at this trendy style. Spicy chocolate pots-de-crème are definitely on my to make list, especially after the recent success of my Amaretto pots au chocolat. I do adore spices and these ones are flavoured with cardamom, star anise, cinnamon and chilli. 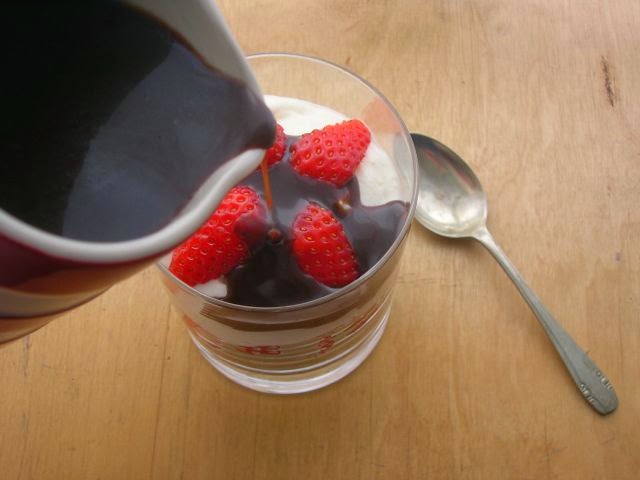 I had a go at making an adapted version of the banana split(isn) sundae in the Treat for One section. Despite the chapter’s title, the recipe stated that it served two! According to Fanny “my super-decadent treat is to layer some better-than brownies cookies in a tall glass with caramelised banana, vanilla ice-cream and an insane chocolate fudge sauce. The perfect break-up cure”. Well I hoped breaking up wasn’t on the cards so went ahead and made it anyway. I opted for fresh strawberries and whipped cream instead of the bananas and ice-cream, but I made her cookies for the base and insane chocolate sauce to drizzle over it all. The quantities seem a little off, I halved the amounts given for the sauce and there was still plenty left over, not that I’m complaining. Unsurprisingly, it was very good indeed, a real treat, although vraiment I wouldn’t say the cookies were anywhere near as delightful as a brownie.