In cold weather, there is nothing more warming and comforting than a big bowl of steaming soup. Or do I mean stew? I’m not entirely sure whether this Mexican bean soup is actually a soup or stew, but with a generous amount of vegetables, beans and spicy Mexican flavours, it certainly makes for a satisfying meal. It’s especially good when served with some hearty wholemeal soda bread spiked with a little smoked chilli honey. 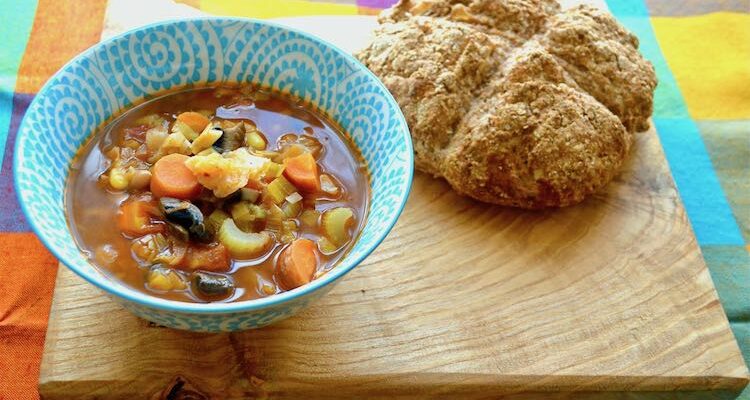 After months of grey and damp weather down here in Cornwall, we finally got a bit of winter. A couple of clear and crisp days with blue skies and sight of the sun has really recharged our batteries. This Mexican bean soup, however, is equally good on miserable wet days as it is on clear cold ones.

Having enjoyed the blackberry and apple spelt soda bread I made back along, I decided to add an apple to this wholemeal spelt soda bread. Not an authentic Mexican flavour, but hey! A little Mexican smoked chilli honey did the trick though and gave just a hint of sweet warmth and smokiness.

With a load of kefir knocking around, I used that rather than buttermilk. In my experience the two are interchangeable for baking purposes. I went with 100% wholemeal spelt flour this time and it worked beautifully. No need for white flour at all it seems.

For the soup I just fried an onion, then added some Mexican spice, black-eyed peas and a load of vegetables I had to hand. I finished it off with some of the smoked chilli honey I’d used in the bread.

It was so good, I made the Mexican bean soup again yesterday and this time I replaced the cabbage with some sea beet greens. omitted the mushrooms and added chunks of squash and a red pepper. It was even better than the first time around. Luckily we have plenty of leftovers, so guess what we’re having for supper tonight?

Easy to prepare, both Mexican bean soup and spelt soda bread combine to make a wholesome meal quicker than you can say Speedy Gonzales. Eat it for lunch or supper, it’ll be sure to cheer you up and fill you up, whatever the weather. For a vegan version, swap the honey for some smoked chilli paste or sauce.

Thanks for visiting Tin and Thyme. If you make this chunky Mexican bean soup, I’d love to hear about it in the comments below. Do share photos on social media too and use the hashtag #tinandthyme, so I can spot them.

You can use whatever vegetables you like or have to hand. Adding chunks of squash and slices of red pepper, instead of the mushrooms, works very well and gives lots of cheerful colour.For a vegan version, swap the honey for some smoked chilli paste or sauce.Please note: calories and other nutritional information are per serving. They're approximate and will depend on exact ingredients used.

Packed with vegetables as this is, I’m also sending it off to Michelle at Utterly Scrummy for Extra Veg.