The original chocolate fudge brownies. A simple one pot, quick and easy recipe with no fancy extras. It produces super fudgy and delicious brownies every time with lots of walnuts for textural crunch. 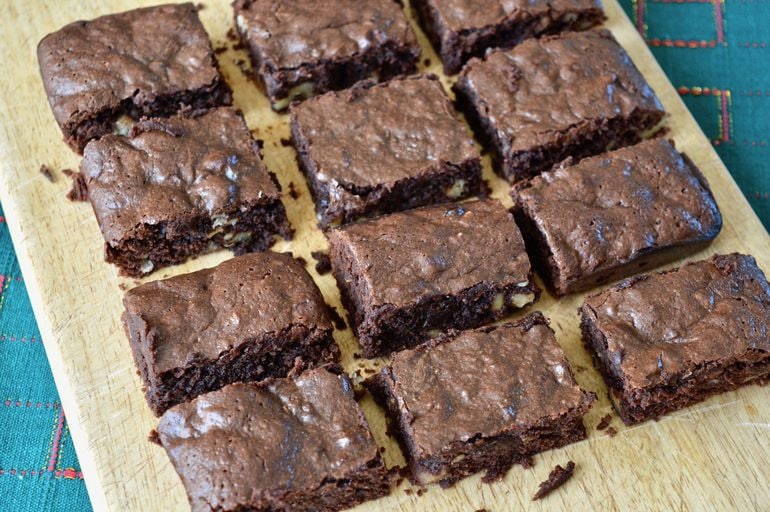 Brownies, they’re as American as apple pie. Perhaps even more so. Chocolate comes from the Americas after all.

It’s hard to imagine now, but there was a time when I’d never heard of them. When I finally got to try one, I couldn’t quite believe how deliciously sweet, fudgy and chocolatey they were. Why did it take Britain so very long to catch on to this most indulgent of American bakes?

My American friend Gina introduced them to me, way back in the 90s. Hers were the first, and because of that, the best I’ve ever eaten.

Gina gave me her recipe and for many years these chocolate fudge brownies were the only brownies I ever made. I made them a lot and usually took a tray with me if we were invited over to friends for a meal. They’re a good way of getting lots of dinner invitations.

Since then I’ve branched out somewhat. You’ll find nearly fifty recipes for brownies on this blog. But despite the fact they all hit the spot, none of them are quite like the original chocolate fudge brownies.

When I want to make something that’s quick and chocolatey, I usually fall back on chocolate brownies. They’re satisfying, comforting and everyone loves them.

I’ve adapted the recipe Gina gave me slightly by using wholemeal or wholemeal spelt flour. And I’ve also developed my one pan brownie method, which not only reduces the effort involved but decreases the amount of washing up too.

Start by putting the butter, sugar and chocolate in a large pan and melt over a low heat. Beat in the eggs, then stir in the flour. It’s pretty much as simple as that.

I always use ounces for this recipe and if your scales include this measurement, I urge you to use it. But worry not, I’ve given the best conversion to grams that I can if this is the only way you can weigh your ingredients. There is an American conversion to cups too for any US visitors.

As these chocolate fudge brownies include quite a lot of sugar, I use a bar of 85% dark chocolate. This helps to offset some of the sweetness but also makes the brownies even more rich and delicious.

As a cinnamon fan, I often substitute a teaspoon of ground cinnamon for the vanilla extract. It just depends on my mood. And if you can get hold of pecan nuts, then by all means swap those for the walnuts. They really are more American than apple pie.

The main thing to take into account is don’t over bake. There’s nothing quite so disappointing as a dry brownie.

For the complete set of brownie and blondie recipes on Tin and Thyme, head to my brownie category.

Thanks for visiting Tin and Thyme. If you make these chocolate fudge brownies, I’d love to hear about it in the comments below. And do please rate it. Have you any top tips? Do share photos on social media too and use the hashtag #tinandthyme, so I can spot them.

If you’d like more baking recipes, follow the link and you’ll find I have quite a lot of them. All delicious and nutritious, of course.

To make these brownies even more authentic, you could swap the walnuts for pecan nuts.And to ring the flavour changes, try swapping the vanilla extract for 1 tsp ground cinnamon.Please note: calories and other nutritional information are per serving. They’re approximate and will depend on exact ingredients used.

I’m sharing these chocolate fudge brownies with Apply to Face Blog for #BakingCrumbs and Lost in Food for #CookBlogShare.

Previous Post: « Chocolate Almond Cake – Only Five Ingredients & GF
Next Post: Chocolate Refried Beans: Only in Mexico, Or Maybe Not »