Love sushi, but don’t want the faff of making your own? Try this recipe for a vegan sushi bowl instead. It’s such a delicious bowl of flavoursome Japanese-inspired healthy goodness, you’ll be coming back to it again and again. 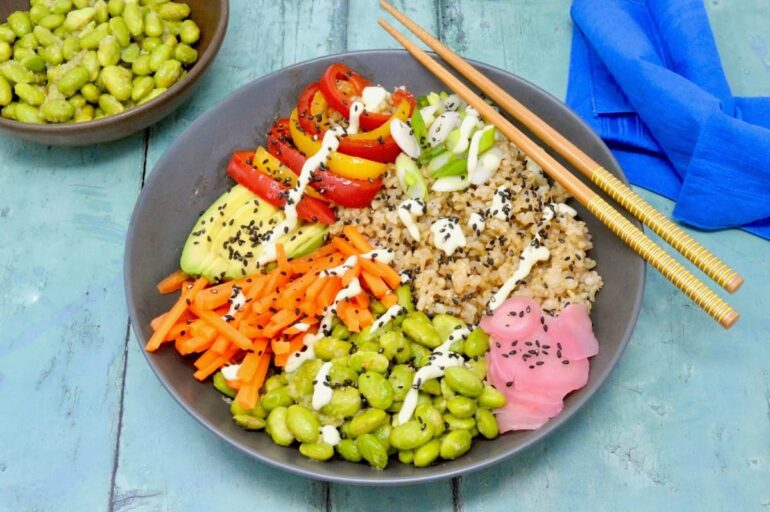 I adore sushi, but I find it too time consuming to prepare, even on a semi regular basis. In fact, I’ve only ever made it twice and that was more a case of helping CT than doing it myself. Cue my version of sushi in a bowl.

If you’ve never had a sushi bowl it’s actually quite similar to a poké bowl. But you may never have had one of those either. Basically, it’s a riff on a traditional sushi roll.

Instead of rolling ingredients into a sheet of seaweed, the ingredients sit free and independent in a bowl. It’s then up to you, the diner, to pick and choose what goes with what.

This vegan sushi bowl is a healthy meal option, but beware, it is calorie dense.

Don’t let the long list of ingredients put you off. There are several processes involved in this vegan sushi bowl, but each one is quick to prepare.

The quantities I’ve given in the recipe is enough for two bowls, but if you want more, just double or triple the ingredients as required.

Every time we tuck into a sushi bowl, CT lets me know everything is just as it should be. He says “this is the taste of Japan”.

There are a few essential ingredients required in order to make this sushi-inspired bowl of deliciousness. Like all good sushi it needs protein, starch, vegetables, seaweed, varied colours and lots of flavour.

Indeed, it’s good to aim for the whole five flavours: sweet, sour, salt, bitter and umami. In this vegan sushi bowl the main source of sweet and sour comes in the form of pickles. Bitter notes are present in many vegetables, but it’s wasabi here that really gives that bitter pungent kick.

Tamari, sea salt and seaweed give that much loved salty content. As for the umami, that comes in the form of tamari and seaweed.

Varied textures are another essential requirement when it comes to sushi. You want chewy, crunchy, smooth and creamy. It’s thus a good idea to have a mix of both raw and cooked vegetables.

For the raw elements of this vegan sushi bowl, I have carrots, spring onions and avocado. Whilst I’ve gone for edamame beans and sweet peppers for the cooked ones.

You’ll need a few essential Japanese ingredients too. Most of these will last quite a while in your store cupboard, so don’t be afraid of buying them. You’ll find a list of them at the bottom of this section.

Sushi rice is a short-grain Japanese sticky rice. It’s not particularly easy to get hold of here in the UK, but you can use other types of short-grain rice instead. I use short-grain brown rice, which is a lot healthier than white and is also really tasty.

It’s a good idea to soak the rice before cooking. This is especially true of brown rice. Soaking makes it easier to clean as the rice sinks to the bottom, rather than floating on the top. But more importantly it reduces the cooking time quite significantly. If you don’t get a chance to soak the rice or only soak it for a short while, it will need longer to cook.

Start this vegan sushi bowl by getting the rice on. Rinse it well and drain. Pour off the soaking water, which is usually quite dirty, then cover with some more water. Give it a good swirl, then pour off the excess water. Repeat once more, if necessary.

Place in a small saucepan with a tight fitting lid. Cover with fresh water to about twice its depth and bring to the boil. Lower the heat to a bare simmer and cook for fifteen minutes. Turn the heat off, but leave to steam with the lid on for a further ten minutes. Don’t be tempted to take a look at this point or the steam will escape.

Once you’ve cooked the rice, you need to mix in a dressing. This not only gives the rice flavour, but it helps to bind it together and make it “sticky”.

For this vegan sushi bowl, I’ve made a dressing of tamari, brown rice vinegar, mirin and nori seaweed flakes.

Traditional sushi rice dressing usually contains a bit of sugar. I don’t add sugar to mine as mirin is already quite sweet and I don’t think it’s necessary.

Traditional sushi is wrapped in sheets of toasted nori seaweed. It’s an integral part of the sushi experience and provides important nutritional benefits. It’s packed full of vitemins A, B, C, D, E and K for a start.

For this vegan sushi bowl, I’ve gone for green nori flakes in lieu of nori sheets. Instead of wrapping the rice in seaweed, I’ve added the seaweed to the rice.

Nori flakes are fairly easy to buy. Just look in the world section of your local supermarket or hunt them out in your nearest health food or whole food shop. They’re really useful for sprinkling over all sorts of dishes as seasoning and a bit of extra goodness.

Edamame beans are young whole soy beans. They may not look like any soy beans you’ve seen before though. This is because they’e harvested young and it’s this that accounts for their bright green colour. They’re highly nutritious and are best known for having a high protein content. However, they’re also particularly good for dietary fibre, antioxidants and vitamin K.

They’re not particularly traditional for use in sushi, but they are very Japanese. And I reckon they make a nice change from tofu.

You can use either fresh or frozen beans, but they do need to be podded. For ease, make sure you buy the ready podded ones. I use frozen as I’ve never actually come across fresh ones. Frozen edamame are quite easy to get hold of in most UK supermarkets these days.

Swap them for cubes of tofu if you prefer. You can treat the tofu in much the same way as the edamame, except it doesn’t need boiling first.

Carrots provide one of the raw ingredients in this vegan sushi bowl. They also give a lovely burst of colour and nutrition. Carrots are not only good for vitamin A, but also contain a number of beneficial antioxidants.

Don’t peel your carrots. Unless they’re particularly grotty on the outside, all they need is a quick scrub. Much of the nutrition is in the peel and it’s a shame to waste it. If you can get organic carrots, so much the better.

Cut them into matchsticks, then either keep them as is or pickle them lightly. I prefer them slightly pickled, so I used some of the pickling liquid in the packet of sushi ginger that I bought. If you want to make a larger batch of them, follow my recipe for carrot pickles. They keep for ages.

I’ve gone for fried sweet peppers in this recipe. But you could replace them with just about anything.

They provide a lovely pop of colour. You can just cut them into sticks and have them as a raw crunchy element, but if you fry them, it brings out the sweetness and makes them really delicious.

Creamy avocado is my favourite ingredient in a veggie or vegan sushi roll. So for me it’s a must in this vegan sushi bowl. I love the delicate flavour, but it’s also good for providing additional texture, colour and nutrition.

If you’ve ever eaten sushi in a Japanese restaurant, you’ll know that mayonnaise is an integral part of the experience. Any sushi bowl worth its salt should have some too.

A little flavoursome mayonnaise drizzled or blobbed over the top makes a real difference to this vegan sushi bowl. I didn’t use Japanese mayonnaise, which I actually find too sweet, but my own homemade vegan mayonnaise. If you haven’t tried this before, please give it a go. It’s so easy and a real game changer.

I mix wasabi into the mayonnaise, rather than have them both as separate elements. It works really well. The wasabi kick is there, but it’s just not quite as powerful and it adds some extra flavour to the mayonnaise too.

Mix a teaspoon of water into the mayonnaise to make it runny enough for drizzling.

Although these items are generally expensive, they’re well worth having. All but the wasabi will keep for a long time and if you like Japanese food, you’ll use them again and again. They’re fairly easy to get hold of in supermarkets these days. But if you have any problems, most health food or whole food shops will stock them or you can buy online.

How To Build A Vegan Sushi Bowl

It’s important to have something that looks visually pleasing with plenty of colour and variety. The Japanese are famous for their elegance and refinement when it comes to food.

Start with the rice. You don’t have to use the vegetables I’ve stated in my recipe, but if you go for something different, make sure you choose contrasting colours. Go for something raw, something pickled and something cooked.

Divide the rice between two bowls, making sure it doesn’t take up more than half the bowl. Then add the edamame on one side.

Add the carrots, peppers, beans, onion slices and avocado in piles around the bowl. Add a few slices of pickled ginger, if using.

Finally, drizzle or blob the mayonnaise strategically around the bowl then scatter with the sesame seeds.

Unearth your chopsticks and enjoy.

Make Your Own Vegan Sushi Bowl

Take my recipe as a guide and use your own favourite elements to make a vegan sushi bowl you’ll love. Here are a few ideas to get you going.

Thanks for visiting Tin and Thyme. If you make this vegan sushi bowl or a variation of it, I’d love to hear about it in the comments below. And do please rate the recipe. Have you any top tips? Do share photos on social media too and use the hashtag #tinandthyme, so I can spot them.

If you don’t get a chance to soak the rice or only soak it for a short while, it will need longer to cook.No sesame oil? Replace it with a neutral cooking oil of your choice.Want more bowls? Just double or triple the recipe as required.Please note: calories and other nutritional information are per serving. They’re approximate and will depend on exact ingredients used.